Champion sets the pace at NFR 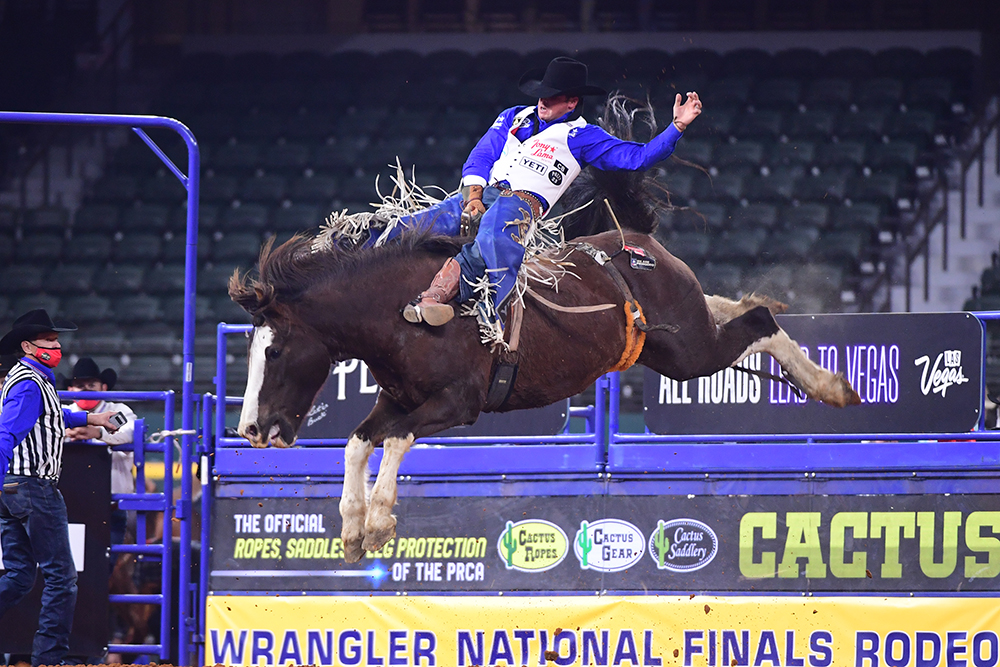 ARLINGTON, Texas – Richmond Champion has done something no other cowboy has ever done.

He became the first person to make a National Finals Rodeo victory lap at Globe Life Field, which is hosting ProRodeo’s grand finale because of COVID-19 limitations at the event’s typical home in Las Vegas.

“Nothing’s sweeter than starting off with a W,” said Champion of Stevensville, Montana, who rode J Bar J Rodeo’s Blessed Assurance for 87.5 points to win the first go-round and pocket $26,231. “I was stoked when I saw that I had that horse. She’s been a great horse for a long time. She’s been here a bunch of times, and they’ve won a bunch of rounds on her.”

Add another one to the mix.

“It’s pretty cool, and I’ll have something I can look back on,” he said. “Putting these memories down, especially in the year we’ve had, is something nice.”

Now a six-time NFR qualifier, he entered the championship seventh in the world standings with $64,149. On opening night of ProRodeo’s marquee event, he moved up to third with $100,380 – each contestant pocketed a $10,000 bonus just by qualifying.

Doing it in Texas at this new baseball arena is just icing on the cake.

“The Thomas & Mack (in Las Vegas) and this place are two completely different animals,” said Champion, who won $1 million in the inaugural The American at AT&T Stadium in 2017; it’s just across the road from Globe Life Field. “Wherever they put those gold buckles, it makes me (excited). To have the opportunity to have a finals when so many sports didn’t on a year like this means something.

“To have the great state of Texas welcome rodeo and give us this opportunity is a huge blessing.”