Anderson hitting his stride at NFR 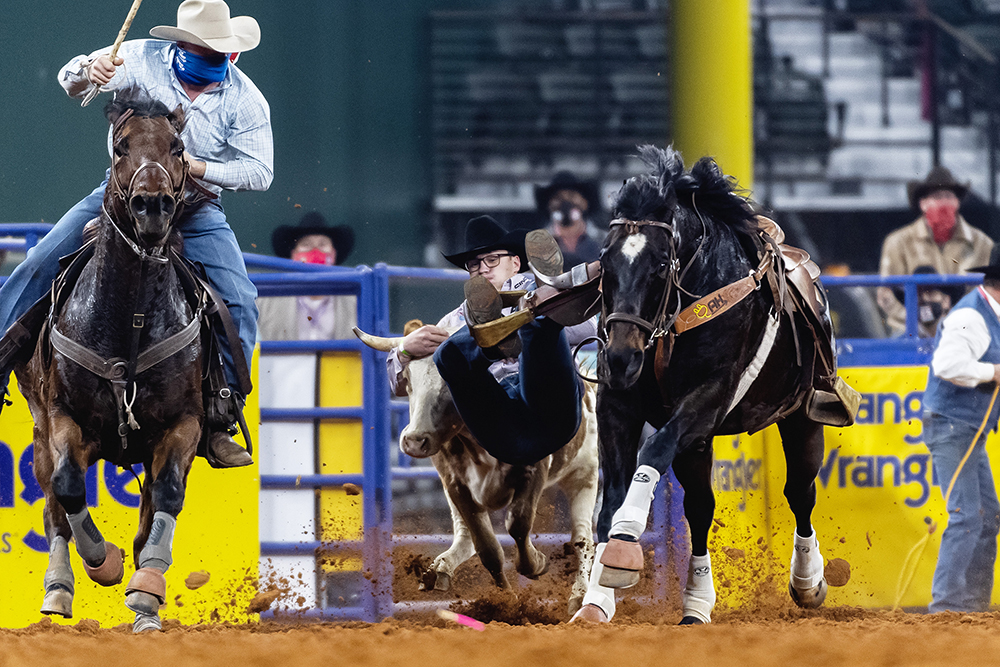 ARLINGTON, Texas – In just three nights of ProRodeo’s championship event, Bridger Anderson has made a name for himself.

The steer wrestler from Carrington, North Dakota, has placed in just two rounds, but he’s placed high. He won Friday’s round, then he tied for second place in Saturday’s third go-round with his fastest run of the week. He grappled his steer to the ground in 3.6 seconds to tie Louisianan Jacob Talley and earn $18,192.

In all, he’s pocketed $51,673 at Globe Life Field in Arlington and has pushed his season earnings to $95,550. He has moved up nine places to second in the world standings.

“We knew we had a good one that ran a little bit,” said Anderson, a senior at Northwestern Oklahoma State University. “I took a fairly aggressive start, and I wasn’t sure if I broke the barrier.”

If he had, he would have suffered a 10-second penalty, but that didn’t happen. He grabbed ahold of the animal’s head, then stopped the clock in a hurry. Only Will Lummus of Mississippi was faster, but by just one-tenth of a second.

“That steer was good and felt awesome,” Anderson said. “Looking up and seeing 3.6, I was excited. Stockton (Graves, his hazer) did a great job lining him out for me, and my horse allowed me to get my feet on the ground.”

Steer wrestling is always a tight race, and this year is no different. Anderson trails the leader, Matt Reeves, by just $6,900 with seven nights in a row. Although he didn’t earn a check in the opening round, he has performed well enough to sit fourth in the aggregate race with a cumulative time of 13.1 seconds on three runs.

“I’m feeling really comfortable,” he said. “The first night, I missed the start and ran him a long way. We knew we had to clean that up. As long as I hit the start and keep making solid runs, I feel real confident about the next seven nights.

“I’m really comfortable with my hazer and my horse. Everything feels really confident right now.”

Between performances, Anderson takes care of himself and spends time with family, something he doesn’t get to do through the year while living 800 miles from home. Graves, who also serves as the rodeo coach at Northwestern Oklahoma State, handles the horses and makes sure everything’s ready by the time the rounds begin at 7 p.m. each night.

“We’ll talk about the draw, but really we bulldog thousands of steers. Take what you’ve got drawn, and see what happens from there.