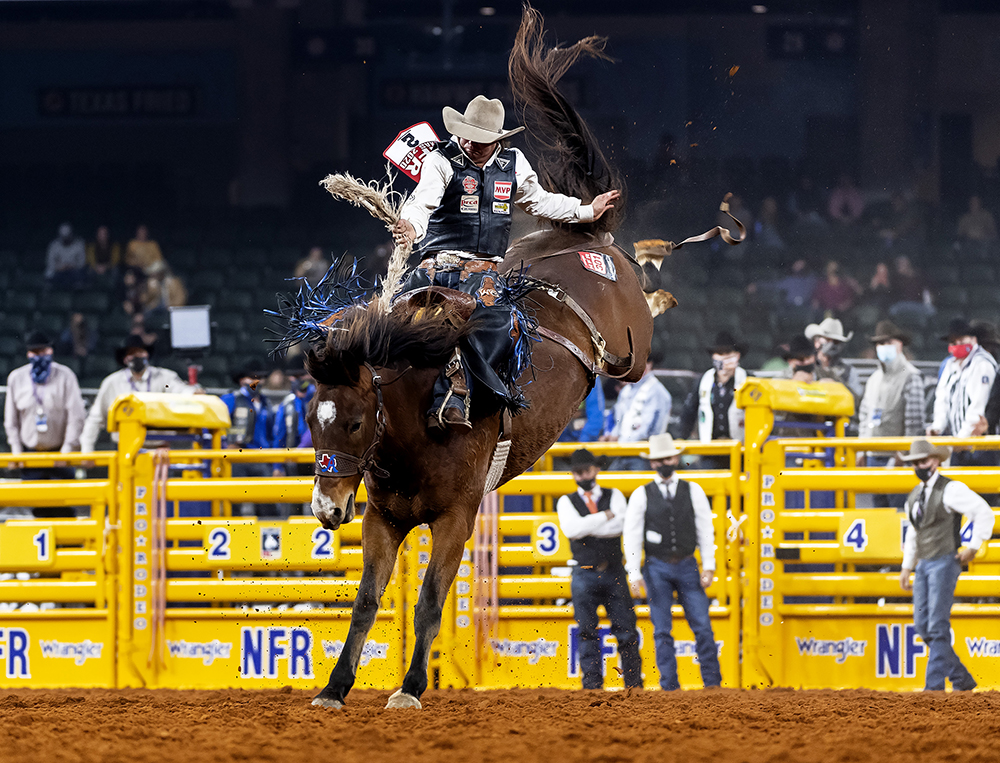 ARLINGTON, Texas – Technology allows for modern sports to do some different things to help make game plans before a game and adjustments during.

Rodeo cowboys do that, too. Take Wyatt Casper, for example. He didn’t know anything about his Saturday night horse, Andrews Rodeo Co.’s Positive Times, but he did some investigating. He found that the animal’s name had been changed, and then watched some videos.

It paid off quite well, as the two danced across the dirt at Globe Life Field for 87.5 points to finish second in the third go-round. That was worth $20,731 and pushed Casper’s National Finals Rodeo earnings to more than $62,000 in just three nights.

“I just had some Instagram and Facebook videos Sammy had posted of him to go off of, and a couple of guys who had been on him lately, and he looked like fun to me,” said Casper, who increased his lead in the saddle bronc riding world standings to nearly $39,000. “It was a blast. This is fun. It has been a different feeling getting on all these good horses and being able to ride them.”

He’s been riding well all season. He kicked off his campaign by winning The American at AT&T Stadium, which is directly west of the Rangers’ ballpark in Arlington. He pocketed $603,000 in March, of which $50,000 counted toward the PRCA’s world standings. He then added another $95,000 through the rest of the regular season to enter ProRodeo’s grand finale atop the world standings.

Ryder Wright, the 2017 world champion from Utah, had gained ground on Casper over the first two nights, but the Miami, Texas, cowboy stayed strong. He has placed in the first three go-rounds and feels as strong as he has all season.

He also became the first ProRodeo contestant this year to cross the $200,000 mark in season earnings. He sits at $207,600 and still has seven more nights to add to that total.

“It’s unbelievable,” he said. “I’m beyond blessed to be here and compete against all those great guys who are just as happy for me to win as they are if they did. It’s just a great bunch of guys.

“It’s been that way all year. If you need picked up from the airport, you just look at the list and call one of your buddies, and they’ll drive an hour out of their way to get you. That’s just how rodeo is.”

This has been a season of mostly ups for Casper, who also earned his first NFR qualification. Of course, winning that kind of money at one rodeo will do that to anyone. It’s life-changing, but he has bigger visions for his career, and gold buckles are part of his dreams most nights.

“I’ve had a lot of good times and very few bad times, and just being here and being able to put the whole thing together is amazing,” said Casper, the 2016 college national champion while competing at Clarendon (Texas) College. “You want to keep chunking away on the and hope you come out on top.

“I’m having a blast. I’ve got my whole family here, and we’re all having fun hanging out.”