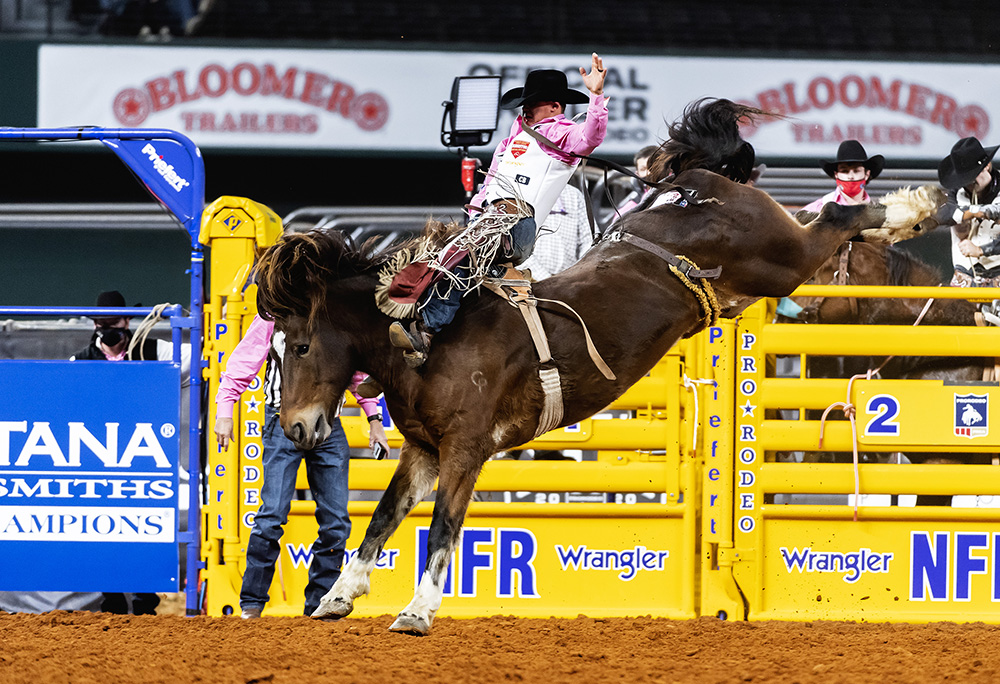 ARLINGTON, Texas – In a match-ups of world champions, they both came out on top.

“She has a couple different trips, but tonight she felt like a Cadillac,” said Biglow, 24, of Clements, California. “I’m shooting for go-rounds and top money every night. Placing would be good, too, but I’m wanting to win every night. The first half of the rodeo was a little shaky, but we’re getting to the second half.

“I guess you can call me a second-half guy.”

A year ago, he placed in the first and third rounds, while missing the mark in Round 2 and 4. He won at least a share of five round titles over the final six nights of the season. He ended the campaign with an NFR earnings record.

Whatever the case, he added $26,231 to his bank account and has pushed his NFR earnings to $58,442. He is now in third place in the world standings with $129,415. And, of course, he was able to take a victory lap inside Globe Life Field for the first time.

“It is different than the Thomas & Mack,” Biglow said, referring to the Las Vegas arena that is the permanent home of the NFR. “Winning first is awesome every time. I hate to lose. I’m a terrible loser. It doesn’t matter where we are at; I want to win first.”

Top Flight has been one of the top horses for the past decade. The fifth and 10th rounds feature the greatest bucking animals that year, and the electric bay athlete has been part of that field every year.

“That’s the fourth time I’ve been on her,” Biglow said. “She is a great horse. She’s 16 now, and she’s had a great career. She’s got to have more money won on her back than any other horse here. She’s not the rank-pen kind of horse.

“She is so consistent; they are dang near 90 points every time she is out. I told Cullin (Pickett), ‘When you retire her, I want her, but I don’t think that’s going to happen.’ ”

Top Flight is one of 27 horses at this year’s NFR genetics from the great Night Jacket. In fact, two of her own colts were part of Sunday’s go-round, meaning they, too, are considered one of the greatest of 2020.

“Cullen said there are some Top Flight babies that are coming up, and they are wicked,” he said.

When champions are matched together, great things happen. Since has virtually no chance to win big money in the average race, he knows how important it is to continue riding this hot streak.

“My job now is to put the best spur ride together and go for go-rounds,” Biglow said. “I mean business when I showed up, and I am really mad. If you don’t get rid of it off your shoulders, it’s just going to be a long week. I’m shooting for the second half.”

That’s what second-half guys do.