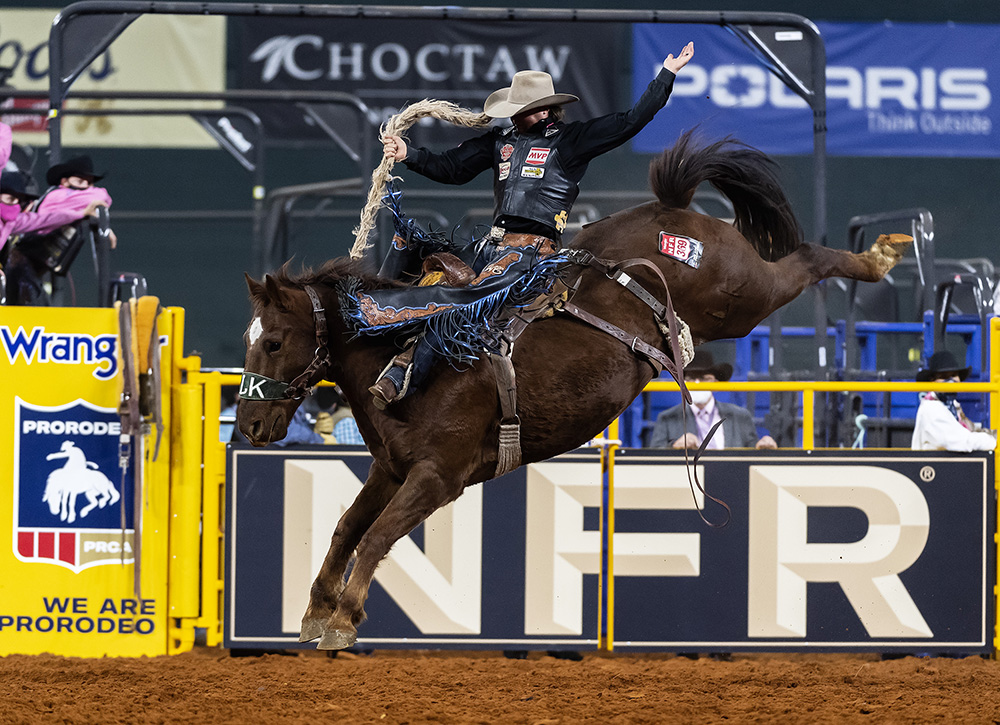 Even after graduating, Casper is still receiving lessons from Franks, and they’re just a little part of the mix in the younger cowboy’s success in ProRodeo. Sitting No. 1 in the world standings, Casper rode Korkow Rodeos’ Onion Ring for 90.5 points to win Monday’s fifth round of the NFR at Globe Life Field.

“After last night, I really needed today,” said Casper, who was bucked off Bar T Rodeo’s Lady Vain on Sunday. “Onion Ring is an incredible horse. I got on him earlier this year at The American and it pretty well felt exactly like he did today. He takes the perfect amount of rein. He goes out there, he is honest and he bucks hard. He just gives you all the time to spur him.

How big are the stakes for Casper? Because he bucked off Sunday, he sits fifth in the average race with 352 points on four rides; if he stays in that spot through the final five nights of the NFR, he will earn a $22,846 bonus. Wright, who is No. 1 in the average, would pocket $67,269 for winning the aggregate title.

That’s actually about the same amount of money Franks won the entire 2000 season. The money in ProRodeo has changed dramatically, for the betterment of the contestants that make a living in this game.

“Bret texted me the other day after I got on Miss Valley (Friday),” Casper said of Franks. “He said, ‘Make sure you’re getting a little quicker on your markout on your next one.’

“I was a little late getting to her, and it worked out, but it was just by a hair.”

Globe Life Field is the new home to the Texas Rangers and it has a retractable crown that can allow for natural air to flow in on nice days. The powers that be may need to open it, though, if things keep going Casper’s way.

“My confidence is through the roof,” he said. “Everything feels really good. We’re just hoping we draw really good horses and keep that confidence up.”