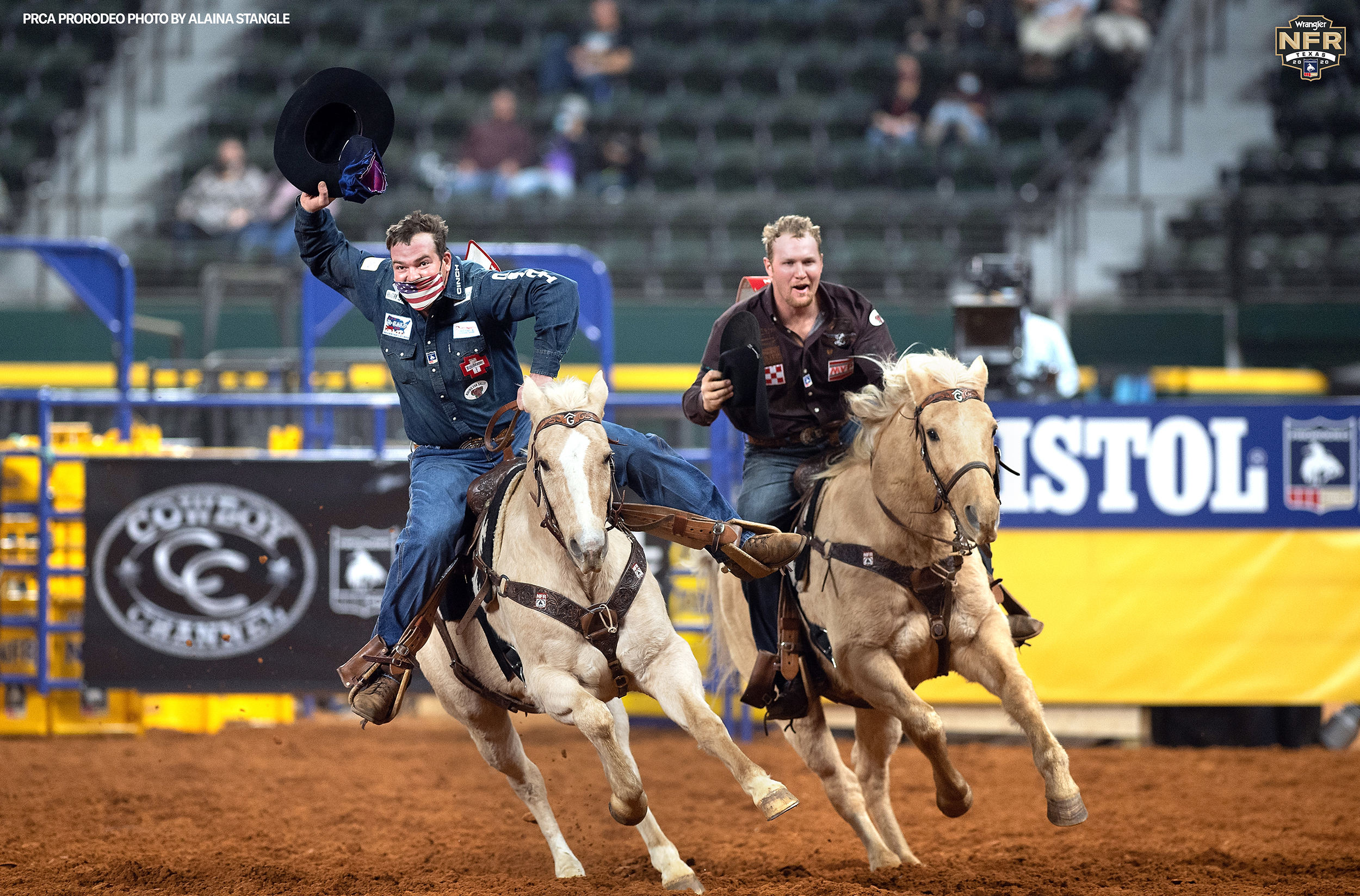 ARLINGTON, Texas – It turns out that Mabel was just the right fit for Jacob Edler to make a significant change.

Garrett Henry’s 9-year-old sorrel mare replaced Ditto – the horse Edler had ridden through the first five rounds of this year’s National Finals Rodeo – in the lineup, and it was a home run Tuesday during the sixth round at Globe Life Field.

Mabel guided both Edler and Stetson Jorgensen to 3.3-second runs to post the fastest times of this year’s NFR and win on Night 6 of ProRodeo’s grand championship. It was worth $23,481 to each man.

“I was very fortunate,” said Edler, 26, of State Center, Iowa. “That horse, Ditto, is an amazing horse. She’s the horse the got me to my first NFR. I rode her in the first five rounds and had some success.

“Throughout the week, it seemed like I was getting a little bit more separation each night from that steer. I asked Stetson right away if I could get on Mabel, because I’d had some success on her in the past. Without hesitation, he said yes.”

During Monday’s fifth round, in which the Iowa cowboy placed, Ditto veered away from the steer just as Edler was about to transition to the steer. That meant he had to actually jump out of his stirrups to secure the catch. Mabel didn’t allow any space to happen for either of her cowboys, which is why they shared the spotlight Tuesday.

“It obviously worked out,” said Edler, who has earned just shy of $60,000 in six nights in Arlington and pushed his season earnings to $104,472. “I got slicked up that steers back, and I was able to do my deal on the ground and win the round. It was awesome.”

The proof came in his celebration. He ignited the crowd inside Globe Life Field, the temporary home of the NFR because of COVID-19 restrictions in Nevada. It was the type of dance that might make highlight reels for years to come.

Edler moved up seven spots to fourth in the world standings. He’s also second in the average race with a cumulative time of 26.8 seconds on six runs. He sits just two-tenths of a second behind Jorgensen for the average title race. The top eight times in the aggregate will earn a bonus at the NFR’s conclusion, with the winner pocketing $67,269.

“Winning this round is very important,” he said. “It was one of my goals to leave with at least one go-round buckle. I’ve dreamed about what that experience would feel like. That feeling never really came until it actually happened right there. That is the best feeling I’ve ever had.”