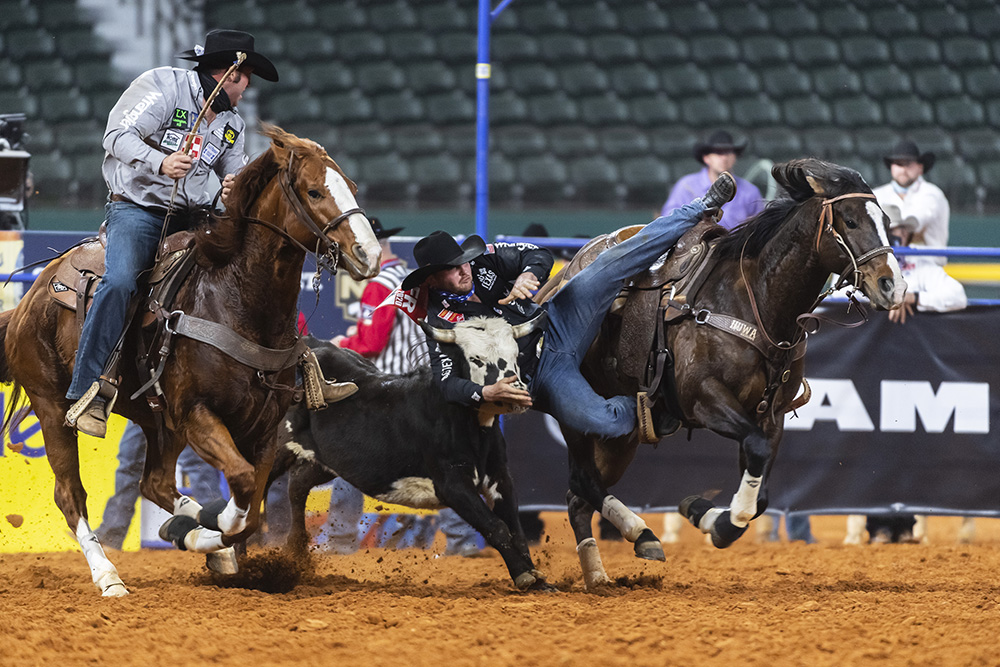 ARLINGTON, Texas – The proverbial monkey that was on Jace Melvin’s back has left Globe Life Arena, and the South Dakota steer wrestler now living in Stephenville, Texas, is having a ball at this year’s National Finals Rodeo.

Being a first-timer on ProRodeo’s grandest stage can be a big nerve-wracking, even if the contestants don’t want to admit it. The change in Melvin’s approach actually came after a penalty-induced run in Sunday’s fourth round.

“When I broke the barrier and was 3.3, that changed everything,” he said, noting that the broken barrier for not allowing the steer the appropriate head start provided a 10-second penalty, making his overall time 13.3. “I was like, ‘I can do this; just take the start.’

“I was trying too hard possibly. After (Monday) night, I realized I just need to go bulldog.”

Melvin won Monday’s fifth round, then followed it Tuesday with a 3.7-second run, which was good enough to tie for fourth place, worth $8,885. He tied with Bridger Anderson, who spent the last two months of this season traveling with Melvin, Cody Devers and Jule Hazen, the latter of whom also made the NFR and placed Tuesday.

“This was a good pen of steers,” Melvin said, noting that Dakota Eldridge finished in sixth place with a 3.8, which has won rounds. “You better bear down if you’re going to win first. I was glad to win what I did, but I had a good steer.

“Honestly, I wish it was a two-header tonight. I could have run a couple. Winning that round took a little monkey off my back. I’m excited to go forward.”

He even celebrated, which really wasn’t in the original game plan when he arrived. Contestants have been tested for COVID-19 before and during this NFR, and a positive test would result in a disqualification. Already, two qualifiers didn’t get to make their runs because they had positive tests before the event began. Because of that, they were replaced.

“Winning the round and what we did after was a blast,” Melvin said. “We have been taking the bubble pretty serious. We let down our hair a little bit (Monday) night. I got to see Mom and Dad, my brothers-in-law and my sisters. It was a lot of fun. You only win your first round one time.”

Of course, he has four rounds remaining on this season, so he hopes there may be more victory laps in his future; if not, he’d still like to walk away with as much NFR cash as he can and possibly with a Montana Silversmiths gold buckle awarded to world champions.