O’Connell makes most of Round 6

Home - Uncategorized - O’Connell makes most of Round 6 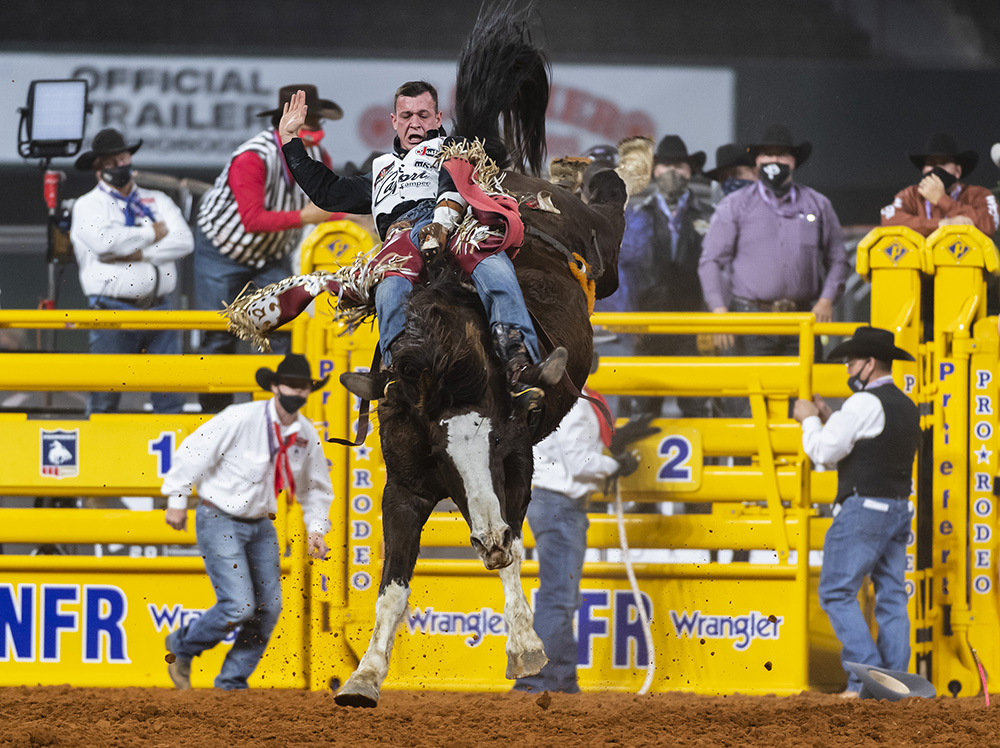 ARLINGTON, Texas – Like all elite athletes, there are some bucking horses that expel all their energy the first time they perform.

“She was pretty stinking good for her second trip in five days with Richie being on her and me being on her,” said O’Connell, who marked 85.5 points to finish in a tie for fifth place in Tuesday’s sixth go-round. “I feel like I got everything out of her I could.”

“I think you have to have a little bit of horsemanship knowing what a horse is going to do and adjusting how you spur,” he said. “You can show these horses. If you (spur) these horses too hard, they can give up. You can’t have them give up and give a point away a round. One point separated me from $5,500 to $18,000.

“You’ve got to help them be the best they can be.”

It’s paying off, and he has four days left in the 2020 ProRodeo season to cash in on his fourth world championship in five years. He holds a lead of just less than $20,000 over the No. 2 man, four-time world champion Kaycee Feild.

“I do think about the average, and I look at it,” said O’Connell, who won the average three times (2016-18), the same years he won Montana Silversmiths gold buckles. “The way I see it, if you don’t know where you’re at and what you’re doing, you’re probably not in a world title race. That’s my mindset.

“I look at the average; I look at the standings. I look at my horses, and I’m strategic about how I do this. When I was nine points back in the average coming into Round 4, you know you’re going to have to do something.”

He did. He won the fourth round and has placed in the two rounds since. He’s also doing it with a torn rotator cuff in his right shoulder, which occurred in the first go-round. Though he doesn’t feel pain when he rides, he makes sure to go through the Justin Sportsmedicine team to ensure his free arm works as well as possible when it’s time.

“Those guys are taking care of me,” said O’Connell of Zwingle, Iowa, now living in Marshall, Missouri. “Once the 10th round is over, then we’ll move on. As of right now, I’ve only thought of the here and now.”

A big reason is because of massage therapist Benny Vaughn, who helped O’Connell rehabilitate his riding-arm shoulder after surgery nearly two years ago.

“Benny has come over and ends up being in with the sports medicine team, so I see him every day,” O’Connell said. “I call him my ‘Magic Man.’ We’ve got a team of three that works on me. I can’t express enough how important the Justin Sports Medicine team is.”