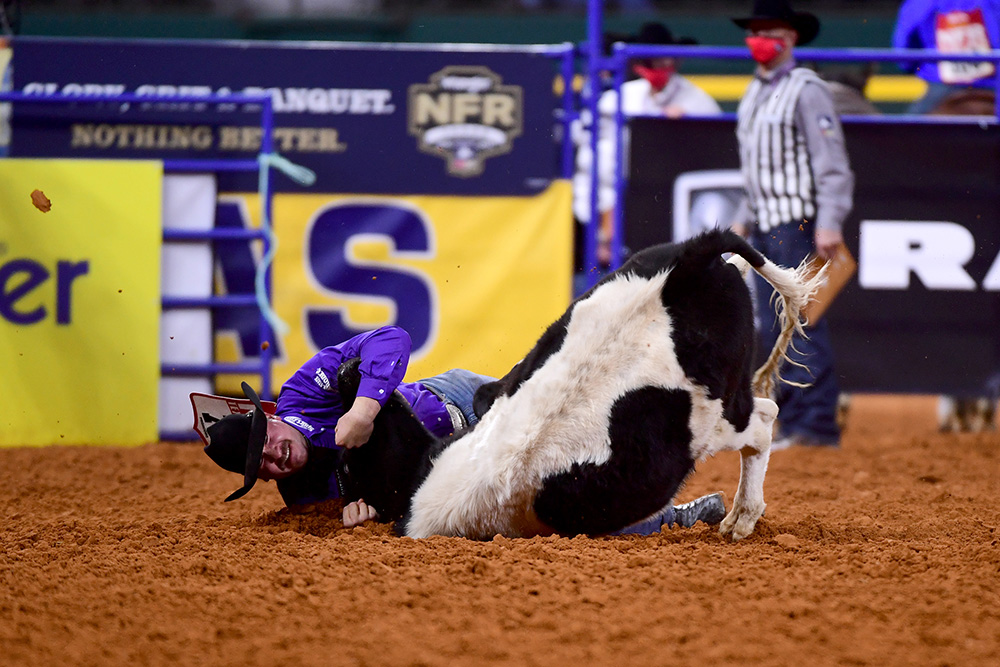 ARLINGTON, Texas – No matter what happened during the first six nights of the National Finals Rodeo, Tanner Brunner kept his head in the game.

There were three nights when his time was too long for him to cash in. He also suffered a broken barrier, which added a 10-second penalty to an otherwise solid run, and he had two no-times. Each night, though, he’d erase his memory of them and focus on the tasks at hand.

It paid off, and he stopped the clock in 3.8 seconds Wednesday night to finish third in the seventh go-round. That was worth $15,654 and was his first paycheck of this year’s finale.

“It can be trying at times,” said Brunner of Ramona, Kansas. “You just have to stay consistent, believe in the system, that you belong here and you have done the work and everything necessary to win. You’ve worked all year and past years to get here, and you belong here.

“I had a great steer tonight and was glad to manage that and use him.”

Times have been fast at this NFR. There were eight men who posted runs of 4.0 seconds or faster, and they all earned money – three cowboys finished in a tie for sixth place to extend the payout a bit, but those three pocketed less than 10 percent of Brunner’s nightly wage.

But Brunner hasn’t always had the best opportunities. He had to take some chanced with less-than-ideal cattle, and he took the consequences that came with it.

Brunner pushed his season earnings to $72,539 and sits 13th in the world standings, but that also is a testament to how tough the competition has been. He has just three more nights to add to his bank account.

“You’ve got the best bulldoggers in the world here,” Brunner said. “The stock is great. We’ve got all the atmosphere and everything. It just turned out to be a good bulldogging tonight.

And he was right in the middle of it.