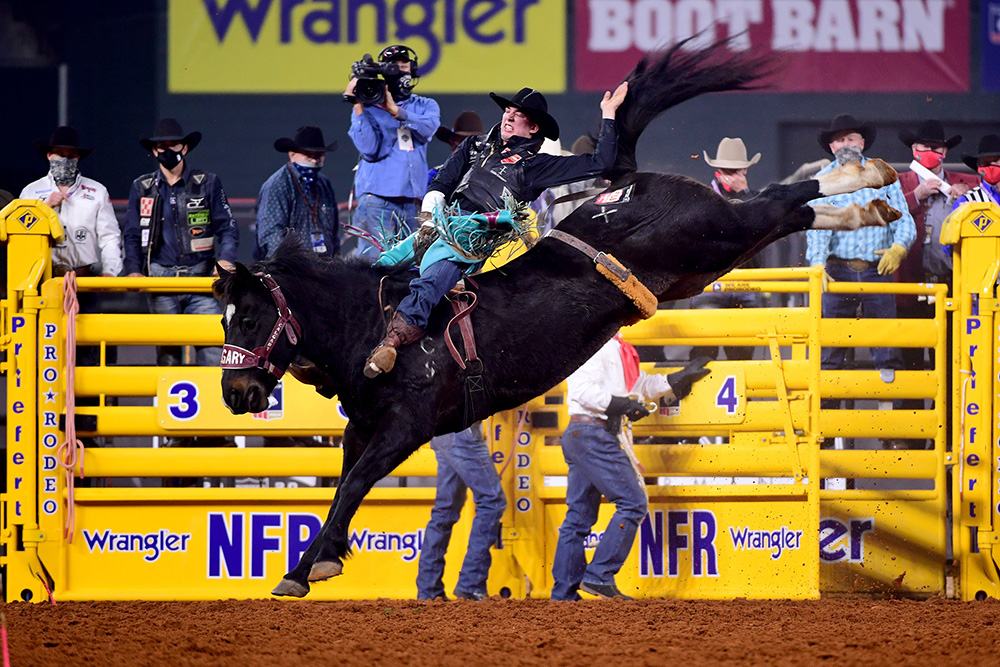 On Thursday night, Pope matched moves with Calgary Stampede’s Xplosive Skies for 89 points to win the sixth round of the National Finals Rodeo, pocketing $26,231 in the process. It was his first go-round victory at his first NFR qualification, and he realized early how special that moment is.

“It is pretty awesome to win a round here,” he said. “It makes you smile 24/7, and it’s just humbling and makes me grateful.

“My main goal going into the victory lap was to not fall off the horse. That’s what Tim (O’Connell) yelled at me right before we went around, ‘Just don’t fall off.’ It was really fun, and I can’t even put it into words.”

With the big score, the Kansas cowboy moved into the No. 1 spot in the average with a cumulative score of 681 points on eight rides. He is 5.5 points ahead of O’Connell, his traveling partner who sits second in the aggregate but first in the world standings.

“This put me in the race for the world title, and I’m leading the average,” Pope said. “God’s got a plan, and I’m just glad the plan is this. It’s positive and going to be great for me.”

He pushed his NFR earnings to $82,417. If he maintains his spot in the average, he’ll pocket a bonus of $67,269. For now, though, he’s sitting at $132,029, which is good enough for fifth in the world standings. It’s all thanks to a powerful Canadian bucking horse.

“Xplosive Skies is a great horse,” he said. “I’ve been on her once in the short round of Fort Worth. She really bucks, and she’s really electric. She wants you off your rigging really bag. It’s like a big ol’ fist fight. She really wants to back you in the corner, and you really got to fight your way out of it.