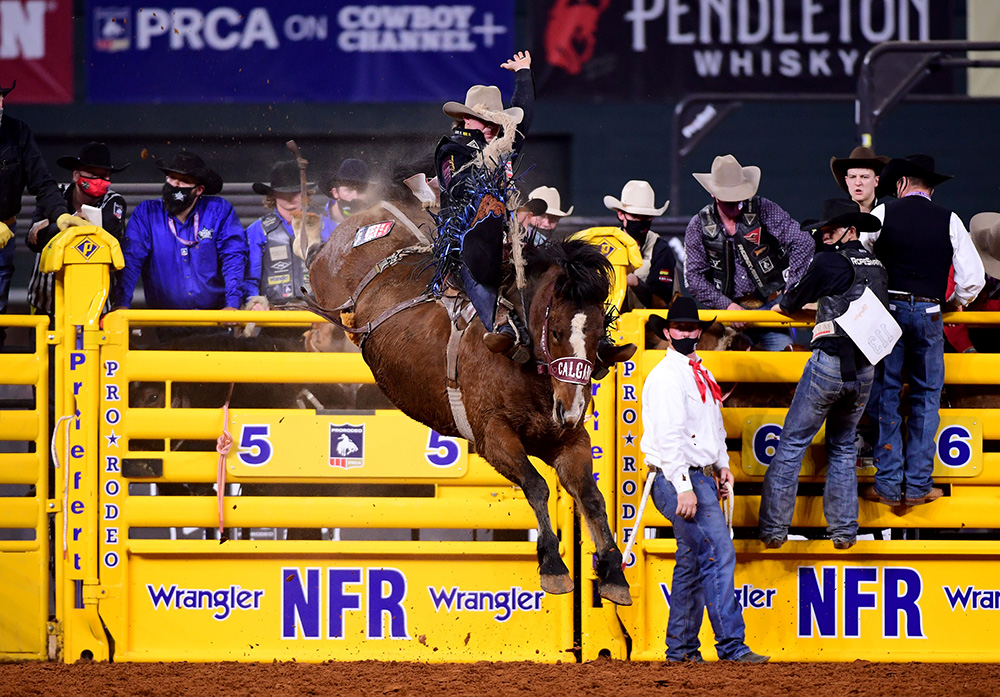 ARLINGTON, Texas – Wyatt Casper needed that in the worst way.

The world standings leader for most of the year, Casper watched his advantage slip away after Thursday’s eighth round, when he finished in sixth place while Ryder Wright won the night and moved to the No. 1 spot on the saddle bronc riding money list.

“I enjoy nights like this, not the one last night,” said Casper, who rode Calgary Stampede’s Xena Warrior for 88 points to win the ninth round Friday at the National Finals Rodeo. “I think she could have won Horse of the Year for the last two years. She is just an outstanding bronc. She gives it all she’s got every time and bucks hard. She is pretty fun to ride. I’m lucky to draw her.”

For his efforts, Casper pocketed $26,231 and took a big leap back toward Wright, who finished in a tie for second place. Casper trails by just $1,314 with one night remaining. And, truthfully, he has had an amazing NFR. He has placed in seven of nine rounds and earned $121,270 in just nine days.

He is second in the average with 290.5 cumulative points on eight rides – he was bucked off in the fourth round – but he has virtually no chance to catch Wright for the average title even if Wright fails to garner a score in the 10th round. The best he can do is stay second in the aggregate, which will pay $54,577.

Some things will have to happen for Casper to walk away from Globe Life Field with the coveted Montana Silversmiths gold buckle. First, he will have to place at least third in the 10th round and hope Wright fails to score. But that’s of no concern to the Miami, Texas, cowboy.

“I needed a little pick-me-up before tomorrow night,” Casper said. “I have a good mindset, so hopefully I’ll draw a good horse and let the chips fall into place where they will.

“It’s a nail-biter. It helps bring out the better in me, and I think the same goes for Ryder. It’s a good competition.”

Yes, it is, and that’s exactly what he was eager to play on the sport’s biggest stage. He has a chance to get on 10 of the greatest bucking horses in the world, and that’s what he needed after scoring just 82.5 points in Thursday’s round. Xena Warrior was the perfect medicine to cure what ailed him.

“I’ve seen her in the Fort Worth short-go with Dawson Hay, and he was 90 points on her,” Casper said. “That meant it would be a dream come true to get on her, and I finally got to. When you’re getting on those good horses, everything usually feels a lot better.”