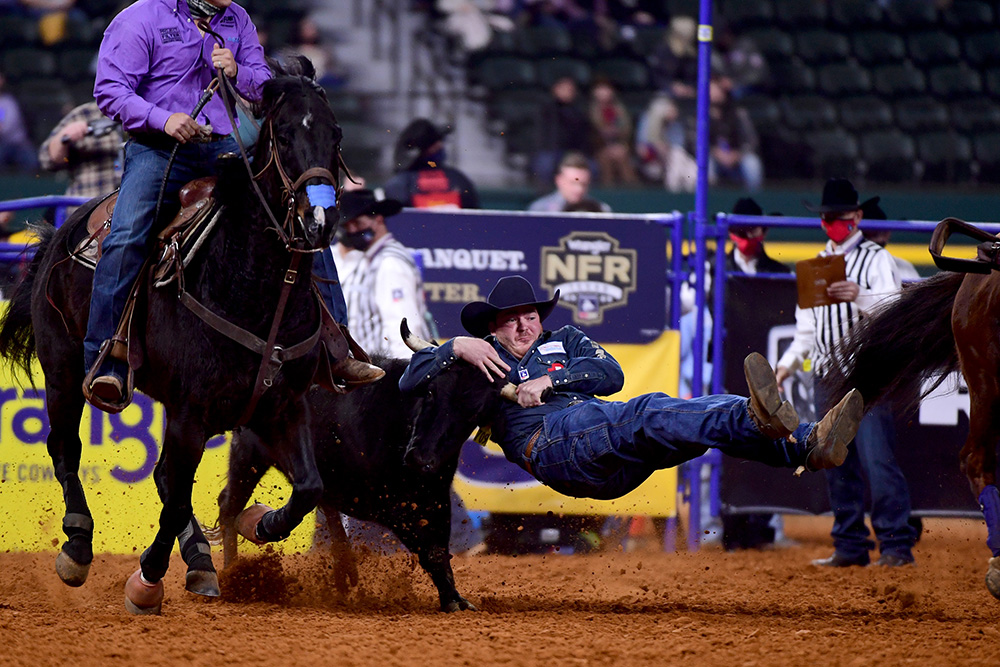 He had qualified for his first NFR on Ditto, a mare that was owned by Canadian Clayton Moore and recently acquired by Shane Frey. They matched together pretty well through the first five nights, but Edler noticed he was getting further away from the steers on each run.

He opted for Mabel, a 9-year-old sorrel mare owned by Garrett Henry and ridden through the last couple of years by fellow bulldogger Stetson Jorgensen. That made all the difference in the world … well, Edler’s world championship, anyway.

“This has been an awesome experience,” said Edler, 26, of State Center, Iowa. “I just tried to do my job every day. Getting to ride Ditto the first five rounds was great, and she did great, but I knew it wasn’t going to work for the rest of the time. I have to thank Garret and Stetson for letting me ride Mabel. She’s the reason I’m sitting here right now.”

In all, he placed in eight of 10 go-rounds and won the NFR average title with a cumulative time of 43.4 seconds. That was worth $67,269 and allowed the Iowa bulldogger to pocket $154,904 over 10 December nights inside Globe Life Field. He finished the year with $200,510 and outdistanced Jorgensen by just $1,680 to earn the coveted Montana Silversmiths gold buckle.

“It’s a start to my future,” he said. “I’ve never seen this much money in my whole life, and I’m very grateful for that. I’ve been blessed to do as well as I have. Me and my beautiful fiancé, Moriah, are going to be able to start a life with this.”

Not only is he about to be married, but he and Moriah are expecting their first child. Edler took his moment during an in-arena interview to proclaim that for all the rodeo world to witness.

In Saturday’s 10th round, he stopped the clock in 3.9 seconds to finish in a tie for fourth place, with $8,885. Not only did that help his stance in the world standings, but it pushed him past Jorgensen for the average lead.

Mabel was the driving force, but the decision to jump on the red rocket’s back all came down to a gut feeling he had – or maybe it was a premonition.

“I had a dream about it right before the fifth round,” said Edler, who finished as the runner-up to his national champion teammate J.D. Struxness at the 2016 College National Finals Rodeo but is now taking home the first gold buckle in steer wrestling for Northwestern Oklahoma State University.

“In the fifth round, I had a great steer drawn, and there was too much separation when I made the move to the steer. I ended up placing fourth in the round, but I knew if I’d been on a horse that gave me a little straighter, tighter goal, I would have won the go-round; that was my sure-tell sign that I needed to get on something else.”

And what does it mean to wear that world champion’s trophy around Alva, home of his alma mater where he now lives?

“It’s huge,” he said. “We’re one of the forces to be reckoned with as far as the Bulldogging Capital of College Rodeo, so to be able to bring that gold buckle back to Alva is great.”

While the 10 days of ProRodeo’s grand finale may seem to have been a great success for the Iowa cowboy, it wasn’t. He almost missed action because he tested positive for COVID, but a second test came up negative. He also watched his spot in the world standings drop to sixth after the ninth round, but he was able to climb back up quickly with a fantastic final night of bulldogging on the final night of the wild 2020 season.

“It was awesome to get to compete with a guy that’s such a competitor like Stetson. When I threw that steer down, I felt like I did my job to the best of my ability, tipped my hat and bowed to the crowd and got out of the arena to see how the race unfolded, and it fell in my favor.”