LAS VEGAS – Last December, the inaugural Bullfighters Only competition in Las Vegas was a skyrocketing success. Now the world’s best bullfighters are upping the ante Vegas style with seven days of world-class action. 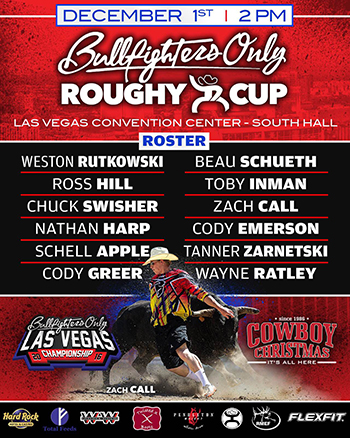 “When we had crowds packed in at 9 in the morning, it showed us that we had something special last year,” said Weston Rutkowski, the third-ranked man in the Bullfighters Only standings from Haskell, Texas. “Now that this is our second year in Vegas, the hype and anticipation is even bigger.”

The competition kicks off at 2 p.m. Dec. 1-3 at the Las Vegas Convention Center with the BFO Roughy Cup, a 12-man invitational bullfight. Then on Dec. 2-3, up-and-coming bullfighters will battle to qualify for the BFO Las Vegas Championship, which takes place Dec. 7-10 at the Hard Rock Hotel & Casino. The 12 qualifier contestants will be announced later this week.

The opening weekend at the Convention Center is free as a part of Las Vegas Events’ Cowboy Christmas. The final four days of action will be in a new climate-controlled tent on the west side of the Hard Rock Hotel & Casino. Tickets are on sale now at AXS.com.

“This is our chance to really put a stamp on who we are as the BFO,” said Ross Hill, the No. 4 man in the standings from. “This is our opportunity to show what Bullfighters Only is all about. We are putting freestyle bullfighting on a higher platform again.”

It takes a strong work ethic mixed with amazing talent and true grit to tangle with bulls that possess such speed, power and agility. The bullfighters utilize their tremendous athleticism to “dance” across the arena floor with a partner that is bred to be in attack mode. When the bull is “hot” and on target, the danger is greater, but so are the opportunities to showcase some magnificent skills

“It’s not just the top guys that are doing things in the BFO,” Hill said. “The fun thing is whether it’s the top five or the bottom five, anybody can come out and win this on any day. It’s about having to do bigger tricks. It’s fun knowing that every person on that roster can beat you any given day.”

In the year since that inaugural Roughy Cup, Bullfighters Only has experienced rapid growth and is in the midst of its first full season of more than 30 events from coast to coast. It’s been a year-long battle that will culminate in the crowning the first freestyle bullfighting world champion in nearly two decades.

Dollars equal points, and all that is gathered in Las Vegas will go toward that championship –another major reason that Vegas is a big stop on the BFO tour.

“The bulls are going to be the best going down the road,” Swisher said. “You’re going to have the 90-point bullfights, you’ll have the near misses and also the hookings. It’s a game of inches.”

Those inches are the difference between agony and ecstasy, but they’re exactly what the best bullfighters in the world crave.