BFO to be televised on RFD-TV

Home - Uncategorized - BFO to be televised on RFD-TV 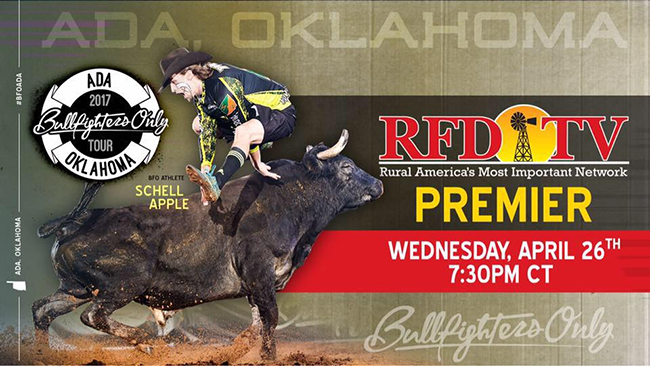 The stage for Bullfighters Only continues to grow, and a national television audience will get to experience the high-powered action of freestyle bullfighting.

The Bullfighters Only event from this past Saturday night in Ada, Okla., will be part of a special airing at 7:30 p.m. (Central) Wednesday, April 26.

“I’m just excited that our next step with Bullfighters Only is coming to fruition on RFD-TV,” said Sean Cassidy, vice president of Western lifestyle events on the network.

The BFO burst onto the Western sports scene two years ago with sessions showcasing many of the most talented freestyle bullfighters in the sport. The popularity quickly grew and now Bullfighters Only is in the midst of its second season on tour.

The Ada event was a 15-man bout focused strictly on the bullfighting. Wednesday’s show will be dedicated to the fights between man and beast. Not only will there video of amazing athletic talent from the bullfighters and their counterparts, but the show will include the danger that comes with the sport.

“RFD-TV has always been a great partner of ours,” said Aaron Ferguson, founder and CEO of Bullfighters Only. “All three of our stand-alone events – Ada, Decatur (Texas) and Lewiston (Idaho) – will be televised on RFD-TV.

“We know how important the Western audience is our sport, and we wanted to create a show that was new and exciting to them. I think we’ll get that with these BFO events.”

Bullfighters Only will add a some extreme to the Western sports world, and RFD-TV is excited to have the special as part of its Wednesday night lineup.

The network has been putting on shows like that since its inception, and that includes the biggest one-day rodeo of the year, RFD-TV’s The American. Bullfighters Only was part of the 2016 rodeo in Arlington, Texas, so the network brass understands the sport.

“The excitement of it is what drew me to it,” Frey said. “The bullfighters have the craziest job of anyone in the world. With Bullfighters Only, it’s not just the ability to dodge a bull or distract a bull; it’s the way they do it with flair and style.

“It takes guts; it takes courage. It really embodies who we are as Americans.”

That’s one of the reasons the partnership works.

“We chose RFD-TV because of their amazing ability to reach people who crave Western sports,” Ferguson said. “What they’ve done for the sport of rodeo with The American has been outstanding. They have a sterling reputation, and that’s why we’re partnering with them.”