Teen giving back to kids after brain injury

Home - Uncategorized - Teen giving back to kids after brain injury 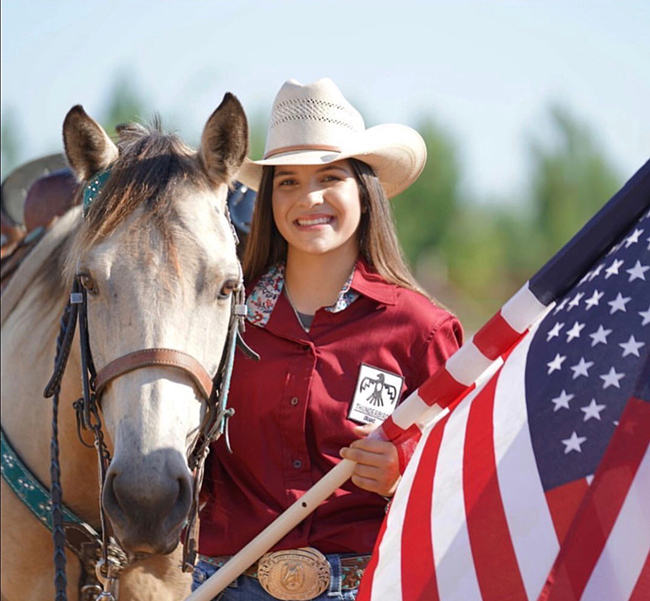 MARION, La. – Hanna Conley has no recollection of the barrel racing wreck that changed her life.

On Dec. 9, 2016, as her horse tried to round the second barrel, it stumbled then fell, and Hanna, then 13 years old, landed face first in the arena dirt. The result was a traumatic brain injury that landed the young lady in a coma for a few days, in the hospital for longer and eventually a rehabilitation center.

She’s a survivor. Now 15, she is thriving, but she still has some rough patches that she and her family hope will be ironed out through therapy and her own will. There are side effects that come with such an injury.

“Hers was a frontal lobe injury, type 2,” said her mother, Becky. “She has ADHD due to the injury, and she struggles with anxiety and depression. Hanna had a little bit of survivor’s guilt from her accident, her making it and coming out as well as she did. It was recommended she see a psychiatrist.”

That helped turn things around, but so did Hanna herself. While attending the Stampede at the Ike rodeo in West Monroe, La. – close to the family’s home in Marion, La. – Hanna watched a video about the Cowboys Who Care Foundation, which provides cowboy hats and smiles to children that have life-threatening injuries or illnesses.

“I was feeling guilty that I walked out of the hospital OK,” Hanna said. “Most of the people in the hospital with me won’t survive, and if they do, they won’t have much of a life.

“I walked out like I was almost fine. I really didn’t have much hope when I was in the hospital. I know what those kids feel like. Just to give them a cowboy hat and make them smile for 20 minutes – and help them forget their problems – would just mean the world to me.”

The young lady is already making an impact. Earlier this month, she conducted an auction that raised nearly $1,200. She also acquired a $100 gift card and sold raffles to help raise money. All told, she raised $1,565 that will go to Cowboys Who Care.

More importantly, she and her parents are coming up with other ideas to help raise even more money for the foundation. That’s just the giving nature Becky and Brian Conley have provided their daughter, and she is happy to carry it forward.

“I’m still learning to deal with all the new adjustments with my personality,” said Hanna, who is utilizing therapies to help her rewire all the circuits that were damaged during her injury. “I feel like I’ve progressed really far. If I don’t progress any more, I’m OK with that, but I’m going to work my hardest to reach my potential.”

That’s the true definition of a cowboy … or cowgirl, in this case. She continues to fight, and her family, friends and community have been there supporting her along the way, both during the time of her injury and now giving back to those who need it more than she does. It takes a great deal of work and faith in God, but each step is a giant stride as she battles back from the injury.

“Hanna’s story is uplifting, because she’s overcome so much,” said Pete Carr, owner of Dallas-based Pete Carr Pro Rodeo and a member of the Cowboys Who Care Foundation board. “The fact that she’s young and wants to give back is inspiring to me, and we are thankful she is involved in our foundation.”