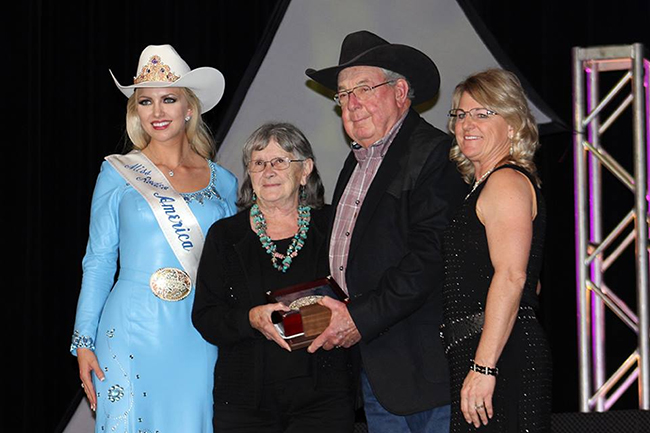 GUNNISON, Colo. – Linda Alsbaugh is one of the most respected and appreciated people in professional rodeo.

She’s been around the game for more than 50 years. She’s been named the Secretary of the Year in the Professional Rodeo Cowboys Association, and in 2012, she and her late husband, Art, received the Donita Barnes Lifetime Achievement Award.

For all but a few years, she has been the face of Cattlemen’s Days PRCA Rodeo for thousands of contestants who have made their way to Gunnison. She returns for this year’s festivities, set for 7 p.m. Thursday, July 12, to Saturday, July 14, at Fred Field Western Center in Gunnison.

“It’s always been home,” said Alsbaugh, who grew up in this town and graduated from Gunnison High School in 1961. “It used to be that I could walk down the street, and I knew everybody in town. It’s grown so much that it doesn’t happen like that anymore.”

The town’s population has more than doubled since her childhood. In fact, there are more people living in Gunnison now than lived in the entire county in 1960. The former Linda Gazzoli married into a rodeo family in 1967, and she’s been there ever since.

“Gunnison has changed a lot since I was little,” she said. “It’s grown. When I was growing up, it was a small town, and kids would play in the street. It was a very conservative town.

“We were probably pretty sheltered. We didn’t know much about what was going on in the outside world. I was in high school when we finally got a television. It was just a little isolated because of the mountains.”

She wouldn’t trade those experiences for anything. In the late 1950s, she began working as an usher at Cattlemen’s Days, and she has many fond memories of those days. Her father was a rancher until he was injured in a haying accident, then he sold insurance. Her mother was a legal secretary.

“My mother was very good at what she did,” she said. “She retired a couple times before she actually retired, because she just liked the work.”

And maybe that’s where she gets her ability to do so well at her job.

She began her life in rodeo when she married into Art’s family, which ran Alsbaugh Rodeo and produced events across the country. Art ran the operation with his father, Walt, until the latter died in 1992. Linda was there every step of the way. Even in those years when she stayed at their Alamosa, Colo., home taking care of their children, rodeo was very much part of her life.

Art died last August after a battle with cancer, but Linda has continued her life on the rodeo trail.

“It’s one of those things that gets in your blood,” she said about her involvement in the sport. “It’s the people: the contestants and the committees.”

Because of the gypsy lifestyle of the sport, rodeo people are often described as one big family. Alsbaugh is one of the matriarchs of that family, and every July, she has the opportunity to go home.

“Cattlemen’s Days Rodeo is important to me because I’ve been there so many years,” Alsbaugh said. “The people on the committee are wonderful to work with, and, of course, it’s like going home. It’s like they say, ‘You can take the girl out of the mountains, but you can’t take the mountains out of the girl.’ Well, I’m a mountain girl.”