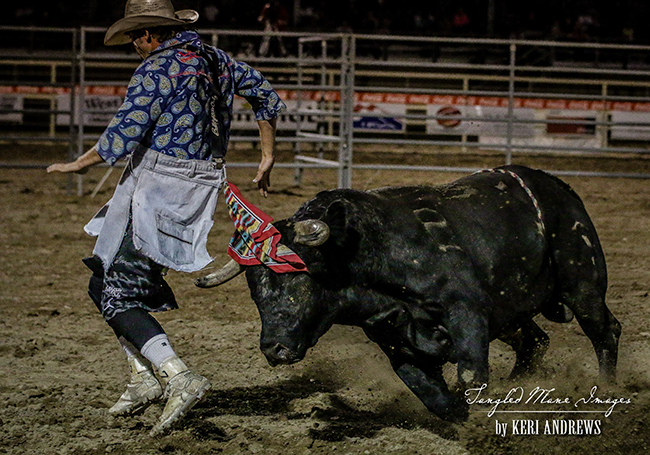 Colorado Springs sits at the base of Pikes Peak and is home to the United States Air Force Academy.

It’s also been the perfect place for Beau Schueth to showcase his talents as a freestyle bullfighter. For the second straight year, he won the Bullfighters Only Wrangler Bullfight Tour stop at the Pikes Peak or Bust Rodeo.

“Colorado Springs has been good for me, that’s for sure,” said Schueth of O’Neill, Neb., who outscored Schell Apple and Brooks Forsythe in the final round. “It has been a really good few days, and I definitely needed it. I was sitting a little further down in the standings than I wanted to be, so I had to start doing good again.”

He won the first-round last Thursday night with a 77-point bout, then returned Saturday for the championship round at the Norris Penrose Event Center, where he put on a strong 87-point fight with Hookin’ A Ranch’s Lamborghini to win the crown and $4,500.

On top of that, he also competed Friday night at the BFO Wrangler Bullfight Tour stop at the Dinosaur Roundup Rodeo in Vernal, Utah. Schueth scored 86 points to finish third behind Justin Josey and Weston Rutkowski.

“I just want to keep the ball rolling heading into Fortuna (Calif.), Burlington (Colo.) and Dodge City (Kan.),” he said of the next three BFO stops in which he will be competing. “Keep it rolling all the way into Vegas in December.”

Based on this past weekend’s push, he is making the moves necessary. By pocketing $6,100, Schueth has pushed his season earnings to $13,327 and moved from sixth to fourth in the Pendleton Whisky World Standings.

“Of the three bulls out in the short round in Colorado Springs, I’d fought two of them and didn’t know the other one,” he said. “They said somebody had won a bullfight on him but that he was probably the weaker one in the pen.

“I knew I’d have to keep on him a little bit if I wanted to have a shot at winning. He was a pretty good bull, just a little slower than the other two, so I had to stay in his face.”

While he had the best weekend of all BFO competitors, Josey wasn’t too far behind. He produced an 89-point fight on Saturday night in Vernal while being matched with Manuel Costa’s Black Jack.

“He was a good little bull that just does his thing,” said Josey, who earned $3,000 for his win and moved to sixth in the standings. “I had to push off on him a little bit, but he was still close to me the whole time. I didn’t have a good sell, but I think the fight went pretty well.”

The judges marked the bout 89 points, which remains one of the top scores of the season.

“This gives me some pretty good confidence to know I can get a little bit closer to a bull and still get away,” he said. “I know I can beat them. I just want to keep fighting the bulls the best I can and let the cards fall where they may at the end.”

The busy schedule continues this week with two events taking place in California. Five men will battle over four days at the Wrangler Bullfight Tour stop at the California Rodeo Salinas, one of the most historic sites for freestyle bullfighting in the nation, while a dozen others will compete Friday, July 20, at the BFO stand-alone bullfight in Fortuna.