Hard work pays off in Salinas 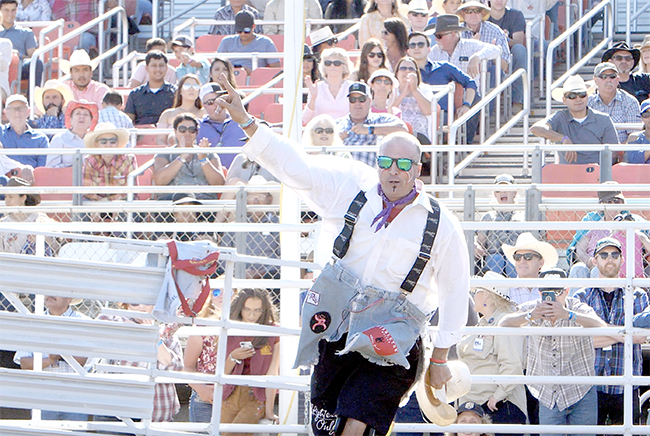 SALINAS, Calif. – Between them, Ross Hill and Nathan Harp have undergone two surgeries and two years of rehabilitation over the last 14 months.

Their persistence paid off this past weekend at the Bullfighters Only Wrangler Bullfight Tour stop at California Rodeo Salinas. Hill won the overall crown by winning the final two nights of freestyle bullfighting, edging Harp by just half a point in the process, 326.5 to the Okie’s 326.

“Starting out fresh, I knew by the final round on Sunday that I would have it figured out,” said Hill, a BFO pioneer who has missed the last year and a half of action. “I had to get back into the swing of things, but after the first two rounds, I felt like I could dial it back in like I knew how to fight a bad Spanish bull.”

Hill had a serious ACL tear, with the original injury occurring in 2009 and compounding from there. He reinjured the same knee twice in 2016, which caused additional damage to his meniscus. Surgery took place this past January, and he was cleared to compete again last week.

“It feels good to know my knee is in good shape,” said Hill of Muscle Shoals, Ala. “I have a lot of confidence about my physical condition. My knee feels amazing. This is the first year that I can remember not being sore.”

The “Alabama Slammer” won the Salinas title for the third time in his career: He shared the title with fellow BFO pioneer Dusty Tuckness in 2007, then won it outright the following year. Those that have tracked his progress since surgery knew it would be possible.

“When he injured it many years ago, then re-did it again in 2016, that was the final straw,” said Keith Skates, the sports medicine coordinator for Fit N Wise Sports Medicine and Bullfighters Only. “When Dr. (Bob) Clifford did the surgery, he noticed that Ross had two bucket-handle tears in his meniscus. To have one was pretty intense, but to have two is an even bigger deal.

“The ACL was so ruptured that it started to grow through his PCL.”

That was a lot of work to be done on one knee. Harp knows about that. When he was injured in April 2017, his surgeon had to repair the ACL, a torn MCL and torn meniscus. He went back to work in cowboy protection this past December, but Salinas was his first time back in a freestyle competition.

“It was great to be back in front of some fighting bulls,” said Harp of Tuttle, Okla. “I’ve fought a lot of rodeos since December, but to nod my head for one for 60 seconds was exciting. I was at the most peace and had the most fun at a freestyle bullfight in a long time. It felt good to be back and enjoying it the way it’s supposed to be.”

With the victory, Hill took the lion’s share of the payout, earning $6,400. Harp collected $5,400. Both paydays will come in handy as the men look to qualify for the BFO Las Vegas Championship, which takes place annually at Tropicana Hotel & Casino and featuring the biggest prize money in the game.

“The guys at Fit N Wise helped me in getting my physical conditioning back,” Hill said. “I’d go in there every day and do workouts. We’d steadily progress my workouts. As I’d gotten stronger, the workouts were more intense. I was feeling better than I had in a long time.”

That’s exactly how Harp felt through the four rounds of tough competition in Salinas.

“I definitely wanted to win, but it was awesome to see Ross make his comeback,” Harp said. “I remember how it was when I first came back to work. I don’t know if I could win an event on my first bull back. For him to do that against the competition there, it was pretty awesome to see.”