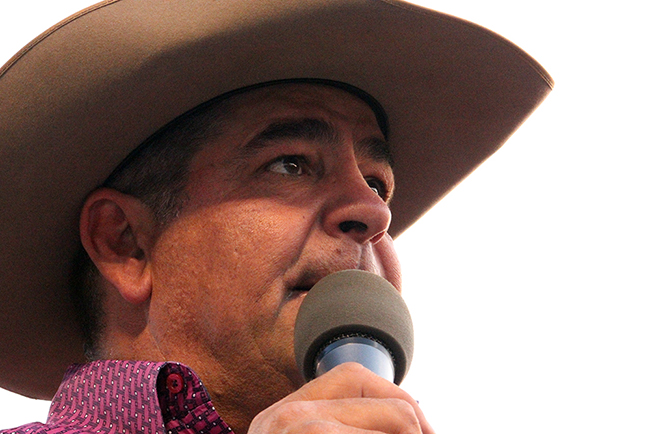 BELLVILLE, Texas – Every good team needs a good coach and the perfect leader on the field.

The Austin County Fair and Rodeo has a very good team. The volunteer committee, which works hard all year to produce Bellville’s rodeo, works closely with award-winning announcer Boyd Polhamus through each of the three rodeo performances, set for 7:30 p.m. Thursday, Oct. 11-Saturday, Oct. 13, at the Austin County Fairgrounds in Bellville.

“Boyd’s like the quarterback of our rodeo; he keeps it going,” said Dusty Kendrick, a longtime member of the rodeo committee. “The people love an announcer that’s on horseback and gets involved with the crowd.

“What I like about Boyd is that he follows it like a movie script. He’s got the opening of the rodeo down to the second. Everybody knows what they’re supposed to do.”

Polhamus is a four-time Announcer of the Year in the Professional Rodeo Cowboys Association who has announced the Wrangler National Finals Rodeo 21 times in a distinguished career. This year, though, his role in Las Vegas will change; he takes over as the general manager of the NFR. That means he will oversee the production for each of the 10 rounds of ProRodeo’s grand finale.

“I think he’ll be good at it,” Kendrick said. “Unless you’re involved in rodeo, you don’t really understand what he’s going to be doing. If you go out to Vegas, you realize he’s got his hands full putting on a production like that.”

While the schedule in the Nevada desert is hectic for Polhamus, his focus most of the year is on being the voice of rodeos like Bellville.

“What I like about Boyd is that he does his homework and knows what our fans like,” said Ricky Huff, chairman of the rodeo committee. “If something happens in the arena, he might interview a contestant. He keeps it going for us.”

Also in the mix will be bullfighters Dusty Tuckness and Chuck Swisher and clown Cody Sosebee. Nearly all have received PRCA honors: Tuckness is the reigning Bullfighter of the Year; Hilton won the inaugural Sound Director of the Year in 2017; Sandy Gwatney was the 2016 Secretary of the Year; and John Gwatney, Swisher and Sosebee have worked the NFR.

“When people see those awards, they want to come out and see that production,” Huff said. “I think it’s great that those kinds of people are involved in our rodeo.”

The production is a major part of the show. Hilton’s sound works in conjunction with Polhamus’ announcing, which is timed with the action in the arena. It’s all caught by the video board’s camera operators.

“I think the crowd likes the way our rodeo is produced,” Kendrick said. “We’ve got to put on aa really good rodeo, but we’ve got a star on the stage at the fairgrounds, and he’s going to be going on, so we want our fans to enjoy a good rodeo, then be able to take in the concert.

“The way John, Boyd and Hambone keep the rodeo running gives them time to get out of the stands and over to the stage for the show. I think everybody appreciates that about our rodeo. It makes us feel good that we’re putting on a good, quality production.”