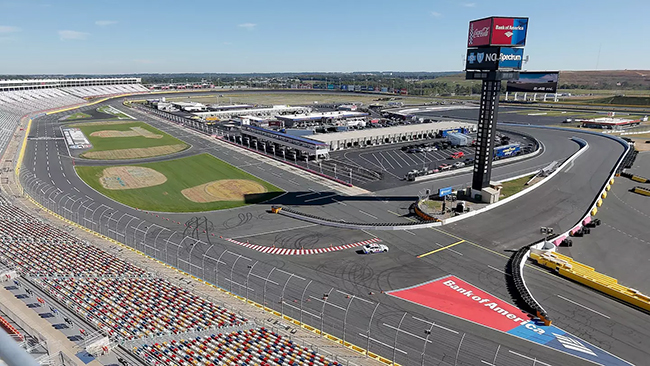 CHARLOTTE, N.C. – Bullfighters Only is teaming up with Speedway Motorsports to showcase freestyle bullfighting to NASCAR fans for the first time in the sports’ history.

On Sunday, Sept. 30, nine of the BFO’s top athletes will be featured at Charlotte Motor Speedway’s Bank of America ROVAL 400. Three qualifying rounds of bullfights will take, with the winner of each advancing to the Hooey Championship Round at 12:15 p.m. Eastern Time.

“At Charlotte Motor Speedway, we’re all about providing added value for our fans, and partners like Bullfighters Only help elevate our major event weekends to new heights,” said Greg Walter, executive vice president of Charlotte Motor Speedway. “With horsepower on display on the track and bull power in the Fan Zone, there truly is something for everyone to enjoy here at America’s Home for Racing.”

The roster is highlighted by veterans Ross Hill, Toby Inman, Kris Furr and two-time reigning world champion Weston Rutkowski. The solid cast of the sport’s rising stars includes Chance Moorman, Tucker Lane and Riley McKetterick, who will all make a bid for the coveted Charlotte title.

“This is a first-of-its-kind collaboration between Bullfighters Only and Speedway Motorsports,” said Aaron Ferguson, founder and CEO of Bullfighters Only. “BFO fits perfect with NASCAR because there’s so much crossover between the two sports and our fans. They’re both high powered and dangerous, with a good chance of seeing some big-time wrecks.”

Bullfighters Only is the premier freestyle bullfighting organization in North America that features the most elite athletes in the sport. It’s a gladiator event, man vs. beast in a battle of athleticism, wit and danger. Bullfighters have 60 seconds to engage an agile and aggressive bull that was bred for this kind of fight.

Each move is countered, and points tell the tale. Bouts are judged on a 100-point scale, with half the points coming from the bull’s aggressiveness, and the rest coming from the bullfighter’s ability to stay close to the bull while maneuvering around and, sometimes, over the animal.

“I think it’s pretty cool that we have an opportunity to show our sport off to NASCAR fans,” said Kris Furr, the fourth-ranked bullfighter in the BFO Pendleton Whisky World Standings. Furr is from Hamptonville, N.C., right in the heart of NASCAR country. “It’s probably the best merger we can have in my opinion.”

It is appropriate that BFO’s first presentation is taking place at this particular race, where for the first time, drivers will battle for Victory Lane by maneuvering around a one-of-a-kind playoff road course.

“People are excited about it,” Furr said. “It’s good to come out to the East Coast and will be an opportunity for a lot of people to see BFO for the first time. Some of my family and friends will finally get to come and watch me compete.”

There is no denying that Bullfighters Only has reignited mainstream interest in freestyle bullfighting, and the popularity is only growing. The Charlotte event will serve as a pilot for potential event partnerships between Bullfighters Only and Speedway Motorsports in 2019 and beyond.

Speedway Motorsports Inc. is a leading marketer, promoter and sponsor of motorsports activities in the United States. The company, through its subsidiaries, owns and operates eight first-class racing facilities in significant markets across the country.

“I think that this is going to open up a bigger and broader fan base for myself and for the BFO,” Furr said. “Being part of these events, you’ve got the opportunity to draw more fans and more sponsors.”