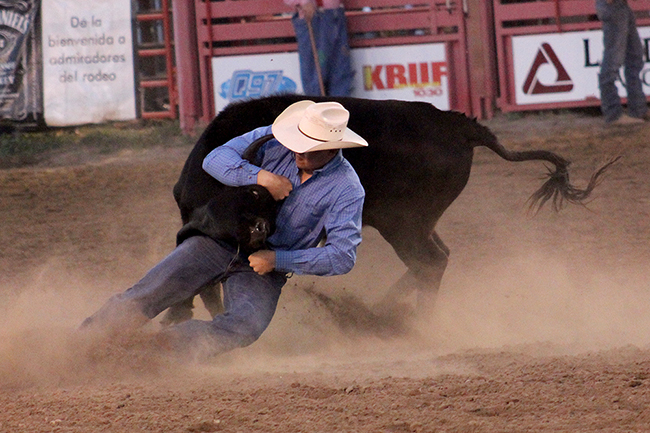 ALVA, Okla. – Even before he made his decision on what university to attend, Devin Olson knew he wanted to be a steer wrestler.

He was watching The American semifinals in Fort Worth, Texas, a year and a half ago and met Northwestern Oklahoma State University rodeo coach Stockton Graves. That meeting led the Taylors Falls, Minn., cowboy to choose Northwestern and make the move 800 miles from home to Alva.

“I went home and looked up his name, and it turned out he was the coach here,” Olson said. “I decided that’s where I wanted to go, because he was the one person who was really good at steer wrestling.”

He made the right decision and was one of several cowboys behind the Northwestern men’s team title this past weekend at the Southeastern Oklahoma State University rodeo in Durant, Okla. Olson joined fellow bulldoggers Jace Rutledge, Bo Yaussi and Bridger Anderson in the championship round of that event alone. In all, Northwestern held 11 spots in the short round in the men’s race and another five spots in the women’s division.

“I think we can be a really good team,” said Olson, a sophomore. “I know that Bridger is really good. We have so many other good steer wrestlers on this team. I think our steer wrestling group is the best in the nation.”

He may be right. Anderson won the bulldogging in Durant; he finished in a three-way tie for second in the opening round, then won the short-go with a 4.2-second run, which was more than half a second ahead of the runners-up. His two-run cumulative time of 8.9 seconds scored the Carrington, N.D., sophomore his first victory of the new season.

“’My first run was pretty good, but there were a couple of things I’d like to tweak,” Olson said. “I got out really well on my second run, but when I went to hook the nose, I fell back and it took a bit to get him thrown.”

Yaussi, a recent transfer to Northwestern, also scored points in tie-down roping. He won the first round with an 8.6-second run but failed to secure a time in the championship round. Riley Wakefield placed high in both rounds to win the tie-down roping title.

Wakefield also added 25 points in team roping, heeling for Southeastern’s Denton Halford. The two finished in a tie for fourth place in the first round but suffered a no-time in the short round. Heeler Jeremy Carney was the biggest points earner in team roping for the Rangers, winning the first round with his partner, Laramie Warren of Southeastern. They finished third in the short round and third overall.

The Northwestern tandem of Kass Bittle and Cole Koppitz finished in a tie for second in the short round and placed third overall. Header Tyler Munsell and her partner, Garden City Community College’s Ean Price, were third in the opening round and finished sixth overall. Heeler Tanner Nall, roping with Ethan Griffin of Northeastern Oklahoma A&M, placed in a tie for sixth place in the first round.

Makayla Mack led the women’s team by finishing third in both the short round and average inn breakaway roping. Melissa Couture clocked in at 2.6 seconds to finish in a tie in the opening round.

Like the other Rangers, Olson has two rodeos under his belt to kick off the new season. He knows he has the support of his teammates and Graves to push him on to the next eight events, two more coming in the fall semester. He’s also got the help from another teammate, his horse, Jimmy.

“My goal at the beginning of the year was to make myself a better steer wrestler, be more competitive and be more consistent in all my runs,” he said. “I want to put in good competitions and make the NFR.

“Jimmy is 27 years old. This will be the fourth year I’ve had him. He puts you in the same spot every single time. This past year, I’ve really clicked with him. I know what he’s going to do. At that age, he’s going to be consistent.”