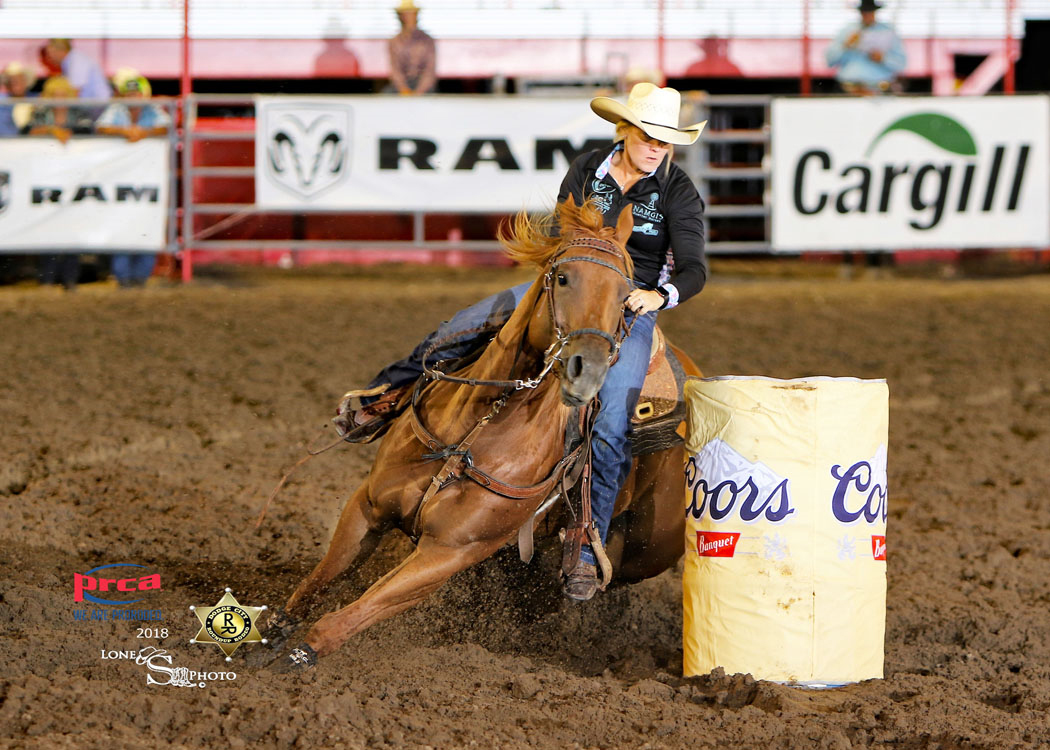 She was a seventh-grader the first of three years her older sister, Janae Ward Massey, qualified for ProRodeo’s grand championship in 2001 and a freshman in high school when Janae won the world title 15 seasons ago.

She comes from a barrel racing family, and now she’s earned her first NFR qualification thanks in large part to Hell on the Red, a 6-year-old sorrel mare that has literally carried Weast through the 2018 regular season.

“Probably the greatest experience was seeing how far my mare has come in a year,” said Weast, 30, who lives in Comanche with her husband, Jay, and their 2-year-old son, Marcus. “It’s just now starting to sink in that I’m going to the NFR, so I’m trying to get everything ready.”

From making sure she and Reddy are on the same page to gathering her clothes for the two weeks she will be gone from home, there are a lot of little details that come with playing the biggest event in the game. The NFR offers a $10 million purse, with go-round winners earning more than $26,000 per round for 10 December nights.

Weast is also the fourth person in her immediate family to have earned an NFR bid. It all traces back to her grandmother, Florence Youree, who qualified for the championship in its first year in 1959. If great aunt Sherry Johnson is added to the mix, then five members of the clan have earned the right by finishing the season among the top 15 in the world standings.

For her part, Weast and Reddy raced through the 2018 season at 60 rodeos and earned $101,750. That works out to about $1,700 per event, which is a pretty good rate. It is, by far, her best season in the Women’s Professional Rodeo Association.

Of course, it’s also the first season she’s ever competed at that many rodeos across the country. She, her mom and Marcus hit the road and figured out the route to the NFR, set for Dec. 6-15 at the Thomas & Mack Center in Las Vegas.

“Janae and Mom are constantly telling me that Reddy is going to be OK, that she’s hunting barrels, and that’s what we want,” Weast said. “Janae told me that the first time I go down the alleyway, I’m not going to be prepared for what I’m going to experience. Mainly my preparation is going to be what I’ve done all year.”

The NFR is no regular rodeo. This is the World Series and Super Bowl wrapped up into a 10-day package. The closest she’s ever been to that situation was when she watched her big sister in her first run in Sin City.

“I was young, so it didn’t really mean a whole lot to me then,” she said. “I remember the atmosphere. I couldn’t believe she was there. It was the coolest thing I’d ever seen. I’m not sure I had the entire grasp of what it meant.”

She knows now, and she’s about to experience it first-hand.

“I’m looking forward to the experience and the memories I’m going to make,” Weast said. “It’s never certain if you’re ever going to get to go again. I have a good set of futurity colts this next year. I don’t know if it’ll be in the cards for me to go again, so I’m going to take it all in.”

She should, because the NFR is quite an experience. Las Vegas becomes a cowboy town for two weeks, far different than it is for the other 50 weeks a year. And she’ll have her family with her the whole time. Jay and Marcus will be with her, while her parents, Renee and James, will help take care of the horses.

In fact, part of Weast’s success was because family was part of the 2018 experience. With her mother and son in tow, life on the road was much easier. She didn’t have time to be homesick.

“Having Marcus with me was the saving grace to everything,” Weast said. “He slept with me every night in the trailer. If I would have had to leave him at home, I don’t think I would’ve done it. Maybe that’s why this isn’t in the cards in the future. There are things I will not miss.

“There are people who are out on the road three months at a time. I don’t know how they do it. I’m one of the better ones off, because I could always come home.”

Family has always been important. She is part of Youree Barrel Horses, and the family raised Reddy. She’s carrying on an amazing family tradition.

“Oh, yeah, I feel pressure, but not from my family,” she said. “The truth is this is our business. To continue to win and put out good horses and sell good horses, that’s where the pressure comes from.

“It’s pretty stinking cool to have this legacy. The bottom line is, I’ve got a twin sister (Cassie Ambrose), and two out of us three girls has made it. We’re already thinking of what horses we’re going to get ready for her in a couple of years.”

Some of that was joking, but there was a considerable amount of seriousness to her statement. The family knows what it means to produce a solid horse, so there shouldn’t be shock to see Ambrose inside the Thomas & Mack in the years to come.

“It’s surreal. Just in the interviews and everything coming up to this, I’ve been aware of the legacy that my grandparents have started, and I’ve become more appreciative of it. To be part of it and really understand it at age 30 is awesome.”

While the legacy is worth noting, Weast and Reddy earned their spot in ProRodeo’s grand finale one run at a time. They get 10 more before the season ends, and they get them in Las Vegas.