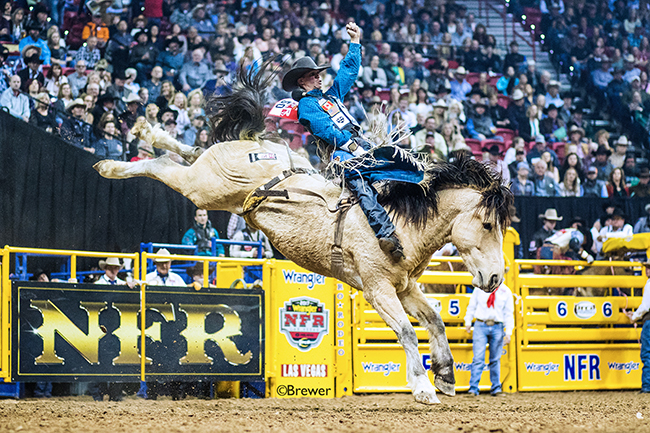 INGLIS, Manitoba – Orin Larsen knew something was wrong, but he didn’t know just how to fix it.

“I was getting in my own way,” said Larsen, who lives with his wife in Gering, Neb., a community of 8,300 people in the state’s panhandle. “I was trying to make a better mousetrap when the mousetrap was already perfect.

“Once I went back to the basics, it was a night-and-day difference.”

“Yes, it’s expected at this point in my career,” he said. “I remember back to the first year I made the finals; I was looking at Bobby Mote and Kaycee Feild and their NFR jackets. They said they were eight- and nine-time qualifiers.

“I thought, ‘It would be cool to have more than three.’ Now that it’s happened, it’s pretty special. I feel like I belong in that arena, and I hope to perform the best I can in that arena.”

He’s proven himself to be in that category. Over the past four seasons, Larsen has earned more than $635,000 riding bucking horses, with $130,655 coming through the rigors of the 2018 regular season. But here’s the kicker: the winner of each go-round will pocket more than $26,000 each round for 10 nights.

He has the opportunity to really cash in, and he’s done so before. Just at the last two NFRs, he has earned more than $150,000. That’s just 20 nights of work. Better yet is that he is as confident as ever as he heads to Las Vegas for the championship, set for Dec. 6-15.

He takes that experience back to Las Vegas, thanks in large part to an outstanding regular season. He won seven rodeos, three of which were large events: Hermiston, Ore.; Strathmore, Alberta; and Pendleton, Ore. He won just shy of $20,000 between those three rodeos alone.

“Winning Pendleton was probably the biggest of the season,” said Larsen, who credits his sponsors, Rieta Creek Scoreboards, Tim Cooper Custom Hats, Soleterra d’Italia and Rodeo Tax, with helping him on the rodeo trail. “That’s one I’ve always wanted to win since my first year there in 2011. That’s just a rodeo with a large, rich history. It’s a unique, old-school rodeo. To wear a buckle that says you won it means so much to me.”

It also came toward the end of the season, so it was the perfect momentum-builder as he rolled toward another qualification to ProRodeo’s grand finale. But he had another big stop to make, and that came the first weekend of November in his birth-province of Alberta.

Larsen won the average at the Canadian Finals Rodeo, the year-end championship in the Canadian Professional Rodeo Association that took place in Red Deer, Alberta. Born and raised in Canada, that championship was one the most magical of his career victories.

While there, he also competed with his two brothers: Tyrel qualified in saddle bronc riding, and Kane earned the right to compete in bull riding before an injury took him out of the mix.

“Having the three of us there was a very special moment,” Orin Larsen said. “I don’t really think we were all at one rodeo riding at the same time since high school. To do it at the CFR and help root each other on definitely tops all.”

Most importantly, it was the perfect transition for him to make before he rides in Vegas against the greatest bucking horses in the game today.

“I definitely feel like I’ve got momentum on my side,” he said. “The first three rounds (in Red Deer), I drew in the middle of the pen. The last three rounds, I drew really good and the best I could. Hopefully I can use that momentum to carry me through Vegas.”

He had family time in Canada, but he’ll also get that during those magical 10 days in the Nevada desert. In addition to his parents, Kevin and Wanda, and brothers, Larsen also has a sister, Cassie, and all are supportive of one another. From their time in youth rodeo to seeing them excel on the sport’s biggest stage, family has always meant a lot to the Larsen clan.

“It’s something we all take for granted when we’re younger,” Orin Larsen said. “The sacrifices my parents have made for Tyrel, Kane and me … you don’t see that until later in your career.”

He shares that with Alexa and her family. They understand the rodeo bug, and they encourage it.

That type of love and support goes a long way, even though they spend a good portion of the year away from one another. Rodeo means he is gone from home for months at a time. They’ve learned how to deal with it and how to move forward.

Now he returns to the sport’s biggest stage with the largest purse on the line. He knows the excitement that awaits him as he drives into Las Vegas at night and sees the skyline and the lights painted on the desert floor. He’s ready to live in the moment and enjoy all that comes his way during those two weeks in Sin City.

“The NFR is such an addicting rodeo,” Larsen said. “I leave the NFR craving to come back, craving to do better and craving to better myself. It’s two weeks of being royalty and getting on the best bucking horses in the world with your buddings. It’s having family and friends there that helps make it such an addicting two weeks.

“I need to feed my addiction.”