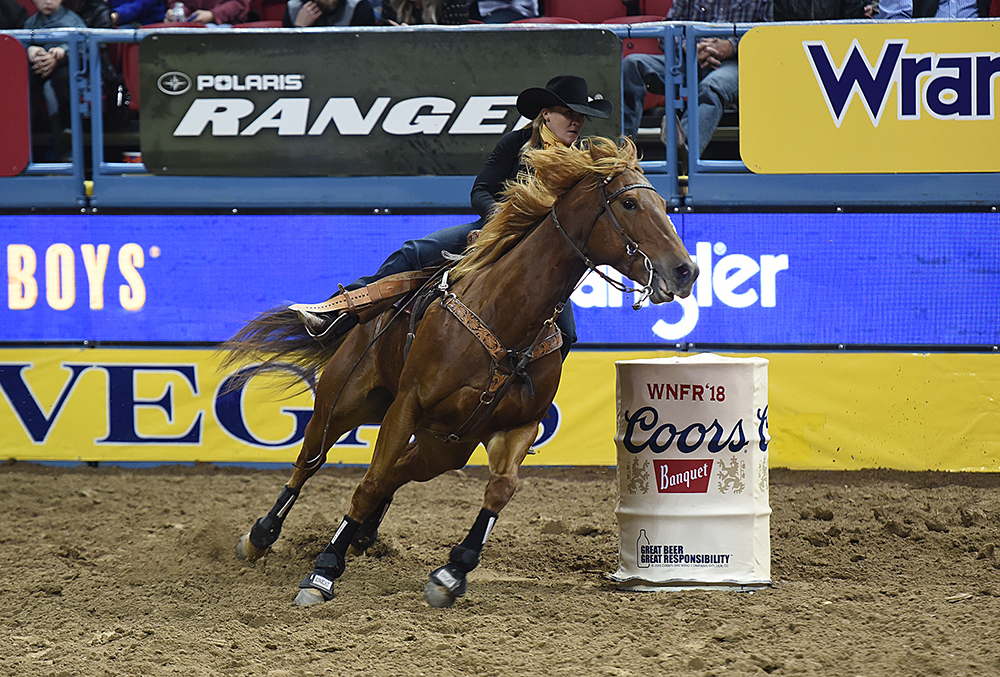 LAS VEGAS – When it comes to taking care of Hell on the Red, Kylie Weast is not pulling any punches.

She has an army of people at the ready, because Reddy deserves it. From having the right blanket to keeping the sorrel mare’s legs wrapped right, every minute detail is covered. It’s paying off.

Weast and Reddy have found the pay window at the National Finals Rodeo during the first three rounds and have earned $36,654 in the process – $6,769 of came during Saturday’s third round, when the tandem rounded the cloverleaf pattern in 13.70 seconds.

That marked the second straight night the two finished with the exact same time, which is good.

“We’re making the same run every time, and we’re looking at this like it’s a different rodeo every night,” said Weast of Comanche, Okla. “I have a game plan every time I go down that alleyway, and she’s being responsive to my game plan.”

What’s most interesting is that Reddy is just 6 years old, but she has solid genetics. That’s being proven inside the Thomas & Mack Center, home to ProRodeo’s grand finale. This is a rough place to play the game, with fast turns and tight corners in an arena roughly the size of a hockey rink.

Five of the 15 cowgirls in the mix have failed to finish among the top six through three nights, and Weast is one of just two ladies who have earned money in each round.

“I feel confident in my mare,” she said. “She’s still sound, and I feel she’s feeling well. We’ve just got to do everything during the day to prep for each night. Right now, everything is working, and we’re probably not going to change it.”

Her mother, Renee Ward, rides Reddy when Weast can’t. Every chance they get, they try to make sure the red mare is in the right frame of mind when it’s time to make a run.

“I try to get out there every day, but like (Sunday), Mom is actually riding and tuning,” Weast said. “We need to make little adjustments.”

She trusts her family and their expertise. The family operates Youree Barrel Horses, which raises and trains horses for these types of races. Her mother qualified for the NFR in 1985, the first year the championship took place in Las Vegas. Her grandmother qualified multiple times, and her sister, Janae Ward Massey, was a three-time qualifier in the early 2000s and won the world title in 2003.

They know the game as well as any person in this 15-lady field.

“It’s wonderful,” she said. “I’m so excited that all my family is going to be here (Sunday). It’s put a little pep in my step.”

What also has her excited is what they see in every run they’ve made in Sin City.

“We don’t really know how fast we’re going, but we know when we make a good run,” Weast said. “(Saturday) night, I had a little bobble that probably cost me a 10th of a second. I knew exactly where I lost my time.”

Each hundredth of a second matters. Had she improved by a 10th of a second, she would have finished second instead of fifth, the difference of nearly $14,000. That can change in a heartbeat, especially with the preparation Weast and her family are putting in on a daily basis.