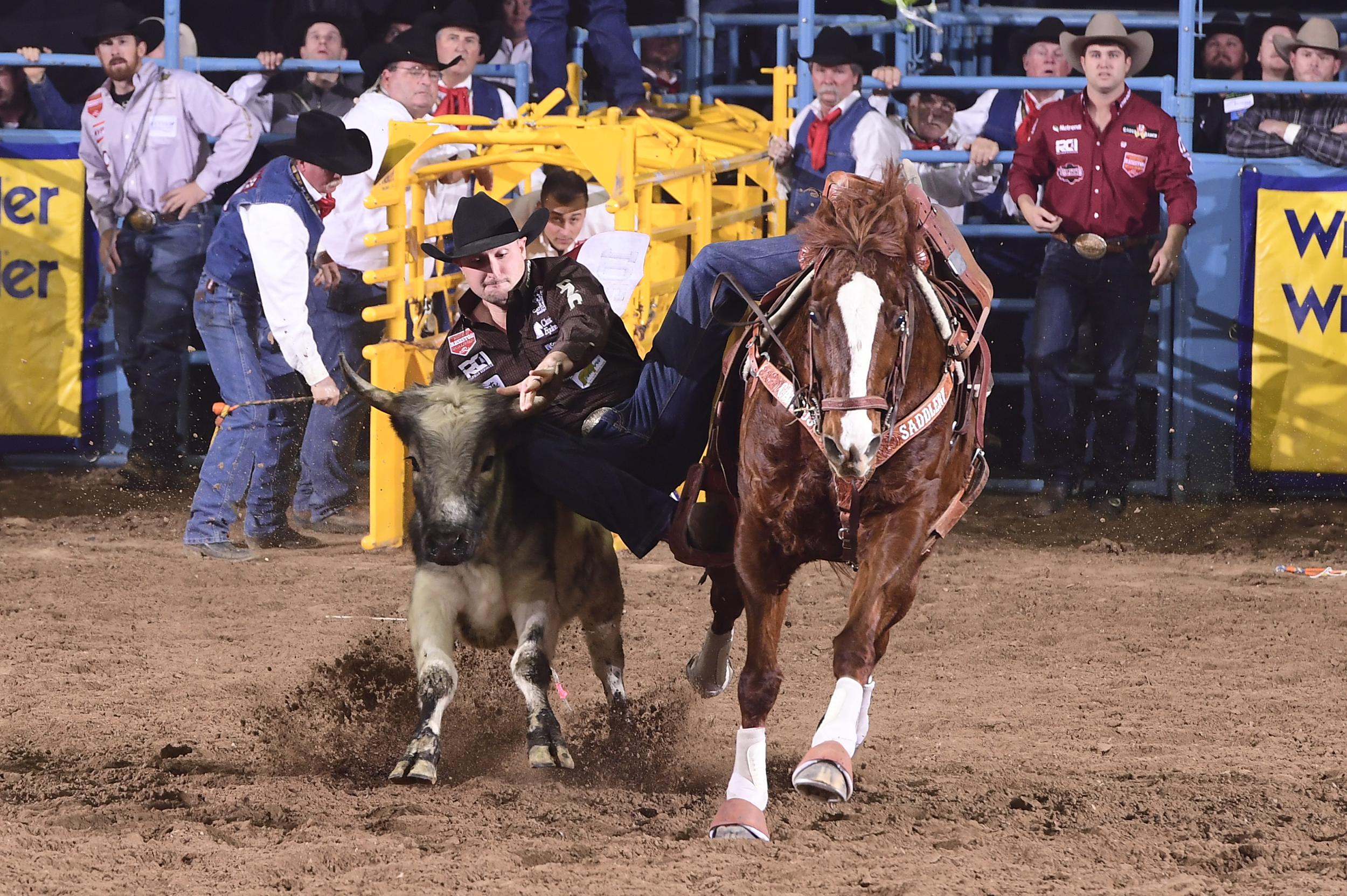 He added more than $11,000 during the sixth go-round after knocking down his steer in 4.1 seconds to finish in a three-way tie for third place.

“That was a steer that Blake Mindemann had trouble catching in Round 3,” said Irwin of Robertsdale, Ala. “You always try to set up a game plan to capture him in this round. (Hazer) Tyler (Pearson) did great, like he always does, and Scooter put me in position to make a good run.

“It was just a good ol’ boy run. I call it a successful night.”

He’s had four of those through six nights in Sin City. That’s a good thing. But all of it is a bit bittersweet. Pearson – his friend, traveling partner and co-owner of Scooter, the two-time horse of the year – is not having such a good NFR. Pearson has had just two qualified times and has placed in just one go-round.

“I always like to see everybody do good,” Irwin said. “I know that’s impossible, because it’s so tough out here and there are 15 guys all running at the top six spots just to place. I’d like to see Tyler do better, but he has nothing to prove; he’s the reigning world champ.

“He’ll bounce back. The dude’s a winner, and he’s dang sure better than a lot of guys.”

Tuesday’s runs were a bit slower than they had been. In the fifth round, a time of 4.1 wouldn’t have placed in the top six. But that’s what happens in Las Vegas, good and bad. It worked out for Irwin on Tuesday.

“It’s a weird vibe this year,” he said. “There’s still energy, but it seems like we’re just trying to get the steers captured. Maybe it’s just the tension and the nerves. The Thomas & Mack creates its own obstacles. I think you’ll see a good bulldogging (Wednesday). The world championship will be shaped by who is the champion here.

“This is a fresh start when you get here, based on the money you can win in Las Vegas.”

So far, the Alabaman – now living in Westville, Fla., with his wife, Randa, and their children, Tripp and Ellie – is doing quite well in all those categories.

“Placing four times out of six nights is very good,” said Irwin, who sits eighth in the average with a cumulate time of 20.2 seconds on five qualified runs. “That’s pretty good odds so far. The way I look at rodeo is on the odds of winning. Now I’ll try to make it five of seven.

“I’ve worked my way up in the average, so that’s nice. I’m just going to make as much money as I can.”

He’s done well through the first six nights of the NFR and has four more before the season comes to a close to make it happen.