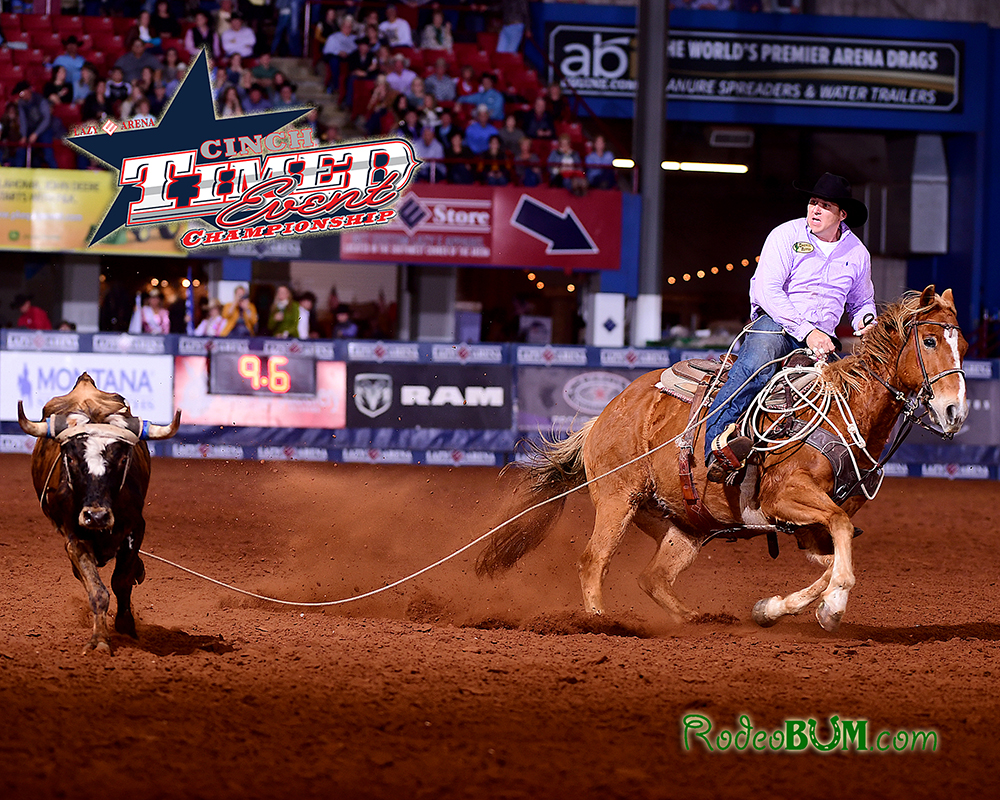 GUTHRIE, Okla. – The lessons that Justin Thigpen has gained over the first two days of his first CINCH Timed Event Championship will hopefully be carried over for years to come.

He has held the lead at this year’s “Ironman of ProRodeo” since Friday night’s second round, and he just built onto it Saturday. He has roped, tied and wrestled 20 animals in 261.8 seconds. That’s impressive for anyone, but especially a CTEC rookie.

What’s more impressive is that Thigpen has a nice cushion: A 76.8-second lead over the No. 2 cowboy, five-time titlist K.C. Jones of Burlington, Wyo.

“This is great,” said Thigpen, 35, of Waycross, Georgia. “There are a lot of tough competitors, a lot of world champions here. It’s a learning curve for me. I know some things I should have done better, but you can’t beat yourself up. It’s a 10-round fight, and you’ve just got to go for it every time.”

Right now, he is throwing haymakers at the field. He has placed in three of four rounds – he finished second in Rounds 1 and 2 and won Saturday afternoon’s third round. Heading into Sunday’s final round, he has already pocketed $7,000.

He has a strong background. He is a 19-time world champion in the International Professional Rodeo Association, having earned titles in the all-around, heading, tie-down roping and steer wrestling – those are just three of the five event that make up the CTEC format.

“One thing I’d do different to prepare for this is more steer tripping,” he said of single steer roping. “We practice pretty hard all the time, minus the steer tripping. For me, it’s just to stay after it, trip some more steers and maybe be a contender next year.”

He’s proven to be a contender this year and has been strong in the events in which he competes regular and has managed his way through steer roping and heeling.

“We ride a bunch of horses and train colts around the house, so I get my share of heeling,” he said. “The key here is just to compete on your head of stock. You’re not roping against those other guys. You’re competing on that cow you have in the chute.”

That mentality is paying off quite well for Thigpen. He finished fourth in the fourth round, but only the top three times in each round earn pay. Rhen Richard of Roosevelt, Utah, won Saturday night’s performance, posting a 49.1, the fastest round of the competition.

“This is the best all-around round I’ve ever put together,” said Richard, who has earned $4,000 so far. “I had a good round started three or four times, and I finally finished a round.

“Hopefully we can put a good round together again tomorrow.”

It could make a difference in his final income from this weekend’s championship. He utilized his fast round to move into sixth place in the average. If he were to hold that spot, it would be worth $5,000. Of course, the goal is to come away with the title and the $100,000 top prize.

Right now, though, Thigpen has a pretty sold avenue to earning that.

“This is awesome,” Richard said. “There aren’t many guys that can say they’ve even entered the Timed Event, so it’s a blessing to be here.”

The story in the Jr. Ironman continues to be Kansas cowboy Trevor Meier, who has a cumulative time of 107.3 seconds after eight runs. He has four more runs to make during the final round Sunday morning.