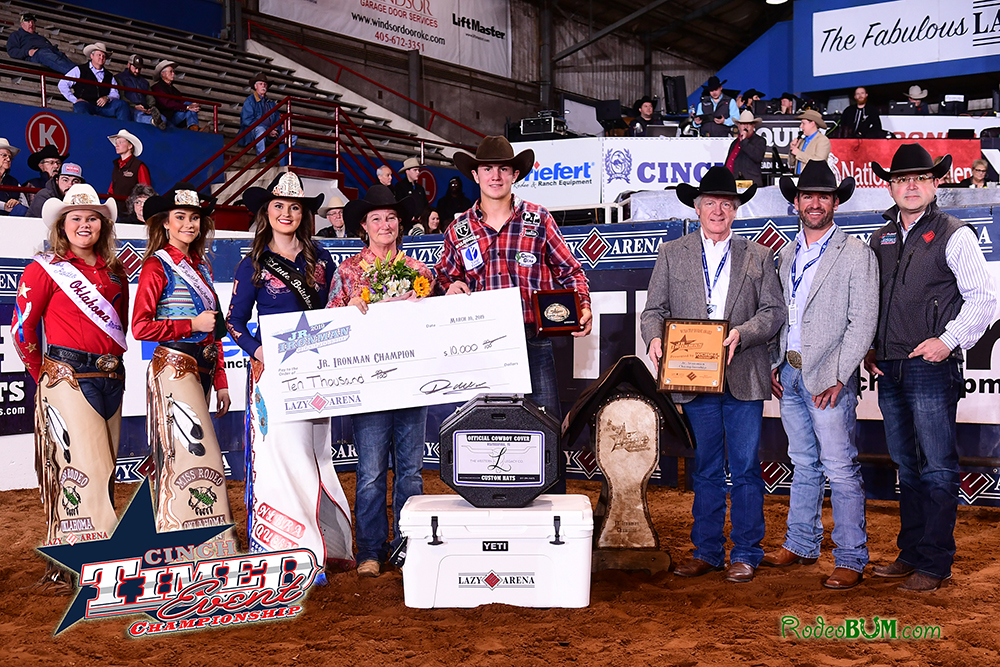 GUTHRIE, Okla. – One man’s misfortune can turn the tide quickly at an event like the Jr. Ironman Championship.

When leader Trevor Meier of Garden City, Kansas, failed to secure a catch during his heeling run Sunday morning, that opened the door for Tyler West to walk through. The Mertzon, Texas, cowboy did just that, parlaying the fastest round of the weekend into the 12-run aggregate championship.

“The first day, I took a 60 in heeling,” West said, referring to the 60-second run, the equivalency of a no-time at the Jr. Ironman and the CINCH Timed Event Championship. “The momentum went my way yesterday, and I kept going with it today.”

Yes, it did. He started off with a 6.5-second run in heading, then closed out the championship by being strong in his final three runs of the three-day event. He set two more arena records in the process, a 6.3 in heeling and the round time of 32.2 seconds. In all, he pocketed $11,000 – all earned Sunday.

With the victory, he earned an invitation to compete in the World Champion Rodeo Alliance semifinals, which takes place in May at the Lazy E Arena.

It’s also an honor to win the title at the third Jr. Ironman.

“It’s a dream for a young cowboy that wants to rodeo professionally one day,” said West, a 19-year-old cowboy who attends Southwest Texas Junior College on a rodeo scholarship. “Words can’t describe what this means to me for my future.”

Though he watched his lead slip away with a tough run in his 11th event of the season, Meier was still content with finishing second. He won Friday’s first round and the runner-up, pocketing $6,000 when all was done.

“The big thing is staying consistent every run,” said Meier, 19, a freshman at Garden City Community College who plans to transfer to Oklahoma Panhandle State University when the time comes. “Just one steer will get you, so you can’t let one run affect your next one.”

It was a busy weekend for all the contestants, but none more than Meier. After competing in Saturday’s second round, he traveled to Fort Scott, Kansas, to compete at the college rodeo. He and his partner placed fifth in the first round in the southeast Kansas community but skipped today’s championship round in order to compete at the Lazy E.

“This is a good platform to go to the next level, a good stepping stone to learn how to have a good mental game.”

A strong mental approach helped West come through the final round unscathed. He loves the opportunity to compete in multiple events and hopes to show that in ProRodeo for years to come.

“I look up to Trevor Brazile,” West said of the winningest cowboy in the game, a seven-time CTEC titlist who owns the record for most Professional Rodeo Cowboys Association world championships. “He has 24 gold buckles, and he has great character. I look up to him.”

It’s a good place to start.