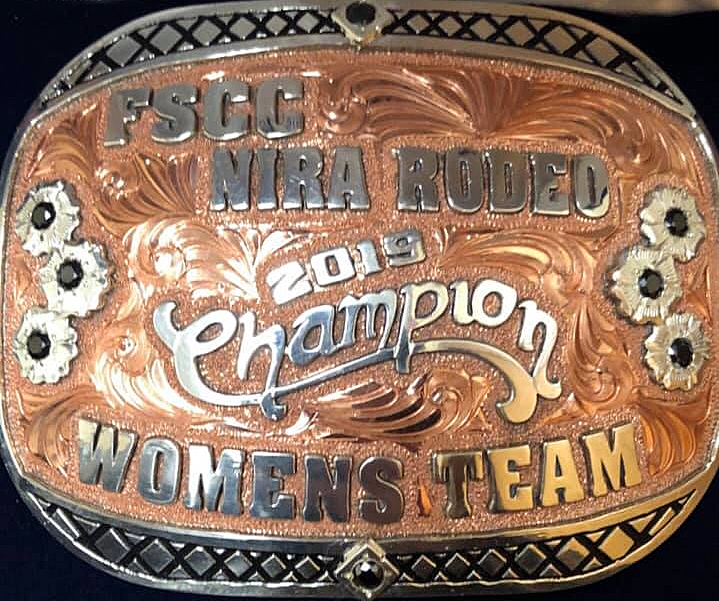 ALVA, Okla. – The Northwestern Oklahoma State University women’s rodeo team is making a statement early in the spring portion of the season.

The Rangers have won the first two rodeos of the semester, first at Kansas State University a few weeks ago, then this past weekend at Fort Scott (Kansas) Community College. They parlayed event titles by barrel racer Ashlyn Moeder of Oakley, Kansas, and breakaway roper Taylor Munsell of Arnett, Oklahoma, into the top finish.

In addition, Moeder finished just ahead of teammate Kayla Wilson of Quincey, Illinois, who made two consistent runs in the eastern Kansas community to place second. By claiming the first two team titles of the semester, Northwestern moved to third place in the Central Plains Region standings.

The goal, now, is to continue to push forward. Only the top two teams in the region advance to the College National Finals Rodeo, and there are just four events remaining on the 2018-19 campaign. The top three individuals in each event also advance, so it all serves as an important incentive for the team members.

“I’m pretty proud of my mare,” Wilson said. “When we were at K-State, we knocked down the third barrel, so it was great for us to have two consistent runs together.”

She’s had Penny since high school, and the horse carried her to the National High School Finals Rodeo two years ago. Now the two are trying to make it work in college rodeo. Wilson and Moeder were joined in the short round by Natalie Berryhill of Remus, Michigan, who won the first round with a 12.67-second run; an overturned barrel in the short round, and the resulting 5-second penalty, knocked Berryhill out of placing overall.

“Our women’s team is pretty strong,” Wilson said. “We’ve got girls in goats that are consistent, and breakaway ropers like Taylor that can pick up points. It shows the hard work we put in practice every day and how dedicated we are to what we do.”

The Northwestern men were led by Bridger Anderson, a sophomore from Carrington, North Dakota, who added to his lead in steer wrestling. He has dominated the standings this season, owning a lead of 252.5 points over the field.

In a tight bulldogging, he finished in a tie for fourth place in the opening round with a 4.5-second run. He followed that 2ith a 4.1 to win the championship round and the average. Brent Woodward of Dupree, South Dakota, placed in the first round. Tie-down roper Bo Yaussi of Udall, Kansas, won the opening round but missed his short-round calf. Still, his points helped the Rangers stay in the No. 3 position in the region.

Wilson found her way to Northwestern during her senior year in high school after visiting with former Ranger Dylan Schulenberg of Coal Valley, Illinois. She considered her options, then during a campus visit two years ago, she found Alva to her liking.

“I loved the rodeo program and the business program at Northwestern,” Wilson said. “I enjoyed the town, so I thought it was a good fit for me.”

Now she hopes to build on the successes of the first two rodeos of the semester to see how things wind up at the conclusion of the season. She credits a positive mental game taught by coach Stockton Graves has been advantageous.

“He tells us that our confidence is the key,” Wilson said. “He gives us a lot of good advice and tells us the harder we work, the better we do. We all work hard, so I think that’s why we’re successful as a women’s team.”