OPSU alum is rodeo ready in ’19 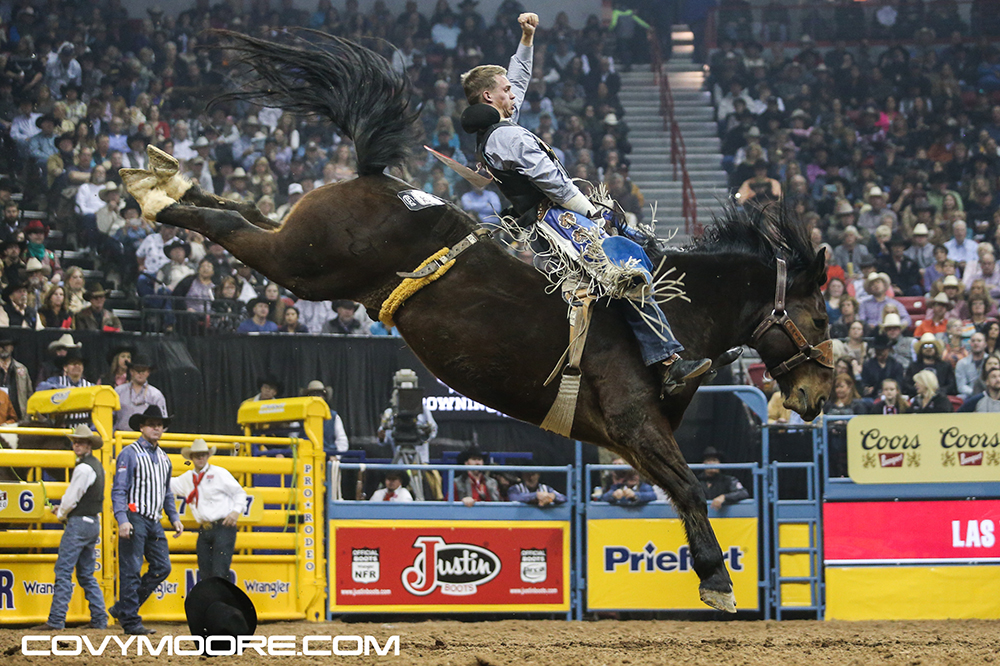 But rolling might just be an understatement. As of April 1, he had earned more than $86,000 on the 2019 ProRodeo season. Having that much money this early in the season might be unprecedented, but he’s actually No. 2 in the world standings, trailing Utahan Kaycee Feild by about $30,000.

“I can’t complain at all about my year,” said Larsen, who claims Ingles, Manitoba, as home but actually lives in Gering, Nebraska. “I didn’t go anywhere this year before San Antonio (in February). I’m glad I got the momentum rolling then.”

That was handy and just in time. Over the first weekend in March, he snagged the biggest victory of his career, winning $100,000 at The American in Arlington, Texas. Half of that counts toward the PRCA world standings, which was a huge boost – he actually led the world standings until Feild won in RodeoHouston a couple weeks later and padded his account by $50,000, all of which counted for the standings.

“I think it was a good for the sport of rodeo for The American to be a PRCA event,” said Larsen, a four-time National Finals Rodeo qualifier. “To be able to win that kind of money is huge. I think you’ll see some of these bigger rodeos want to be involved in the PRCA again. I’ve got my hopes pretty high for the PRCA in that regard.”

Pioneer Days has long been associated with the premier rodeo association. In fact, it’s a ProRodeo Hall of Fame inductee. Guymon’s rodeo offers a nice purse and a good time of year to be an attractive stop for contestants from all over the country. This year, the volunteer committee made a significant change in hiring Freedom, Oklahoma-based Frontier Rodeo as its stock contractor.

“The horses that are going to be in Guymon are going to give you every chance to win a pile of money,” Larsen said of Frontier, the reigning four-time PRCA Stock Contractor of the Year. “I don’t think it’s a bad deal. Pete (Carr) has had a lot of great horses in his time in Guymon, and they were more rider-friendly.

“What Heath (Stewart) and Frontier will bring is the A team, and that’s a bunch of buckers. I’ve been fortunate enough to have won a bunch of money on a lot of Frontier horses.”

This season is off to a better start.

“It’s too early to tell what’s going to make it to the finals in regards to the money earned,” he said, pointing to the fact that only the top 15 on the money list in each event advance to the grand finale. “It is going to change the shape of what it’s going to take to make the finals and how much money is out there for the guys. That just means there’s more money available for the cowboys. That’s never a bad thing.”

While he has a nice advantage and is a near lock to qualify for the NFR for the fifth straight year, he still plans to compete this season his way. He and his traveling partner, fellow Panhandle State rodeo team alumnus Seth Hardwick, will approach the season much in the same way they have the past few.

“I’m still going to be picky about where I go and what I get on,” Larsen said. “To me, I enjoy the sport too much to just go home until July. There are 50 other guys that want to be where I’m at, and I have to be just as competitive as I am now as if I were the 50th guy.

He’s looking forward to his return to the Oklahoma Panhandle the first weekend in May. After spending his first years at the College of Southern Idaho, he transferred to Panhandle State. He won college titles at both institutions, and he holds a fondness for so many things that happened in Texas County.

“It’s a very special feeling going back there every year,” he said. “It’s a hometown rodeo for me. It’s been five years since I went to school there, so I don’t know the students. But I get to see the people I used to work with or the people in the community you have a relationship with.

Larsen has yet to win the prestigious trophy belt given to the Pioneer Days Rodeo champions each season. He’d like to add that to his memory bank, so maybe this is his year.