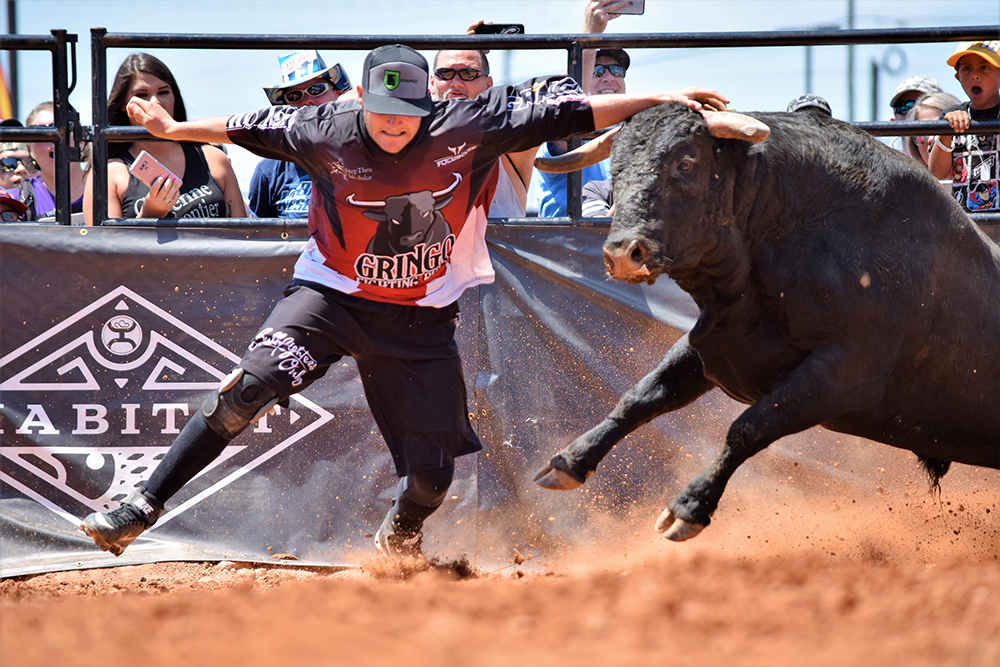 CHARLOTTE, N.C. – Aaron Mercer was hot in more ways than one this past Sunday during the Bullfighters Only Speedway Series event at the Charlotte Motor Speedway. The event was part of the race-day experience at the NASCAR Coca-Cola 600.

As sweat poured from his body, Mercer mustered up enough willpower to win the title, pocket $6,500 and move to No. 2 in the BFO Pendleton Whisky World Standings.

“It was crazy, and it was electric,” said Mercer of Calgary, Alberta. “The crowd was just awesome, and the bulls were sweet. It was so cool to be part of the NASCAR race. The experience was just amazing, and to get the win was even better.”

The average May temperature in Calgary is 61 degrees Fahrenheit, or 16 degrees Celsius. The temperature in Charlotte on Sunday was 93 with humidity at 63 percent adding to the heat index. That’s sweltering for any athlete, much less one from the drier climate in Alberta.

“I’ve never been so warm in all my life, and I’ve never been so tired after a bullfight,” he said. “It wasn’t just hot, but it was humid, and that added to it. When it’s 95 degrees Fahrenheit in Canada, we’re hot, but we don’t have that kind of humidity.”

It was an amazing finish to an incredible month for Mercer, who had titles earlier in May in Las Vegas and Redding, California. He also had second-place finishes at stand-alone BFO events in Woodward, Oklahoma, and Kennewick, Washington. He’s earned $20,024 this season – virtually all has come in the first 26 days of the month.

“I honestly don’t know what to say about doing this good my first year in the BFO,” said Mercer, who trails leader Toby Inman by $2,626 heading into the summer run. “I’ve been hanging out with guys that I’ve been fans of for a while, and now I’ve become friends with them.”

He’s proven that he belongs. Mercer won his round in Charlotte with an 86-point bout to earn his spot in the Hooey Championship Round along with Justin Josey of Apache, Oklahoma, and Chase Blythe of Concord, North Carolina. In the finale, Mercer tangled with the Chad Ellison bull Eighteen & Life.

The spotted bull was aggressive, but Mercer countered with some nice back fakes. Eighteen & Life got in a few jabs throughout the bout, but the end result was an event-winning 80.5-point fight.

“Now I’ve just got to keep pushing to the top,” he said. “I’ve got some momentum, and I’ve been doing some things outside the arena to help. I’m going to the gym and working hard. That’s what you’ve got to do if you want to be the best of the best.”

That’s the thing about being part of the BFO, the premier organization in freestyle bullfighting and the driving force behind the sport’s recent growth. The Speedway Series is just another example of how popular it has become.

“Sitting on the fence during the bullfight, the people in the crowd want to interact with you and talk to you,” Mercer said. “It’s cool that they want to be involved, have that kind of support and have people looking up to you.

“You don’t choose to be a role model, but it just happens. I never really expected it, but having it all blow up like this is really something.”