Clown has a bag of fun for Gunnison

Home - Uncategorized - Clown has a bag of fun for Gunnison 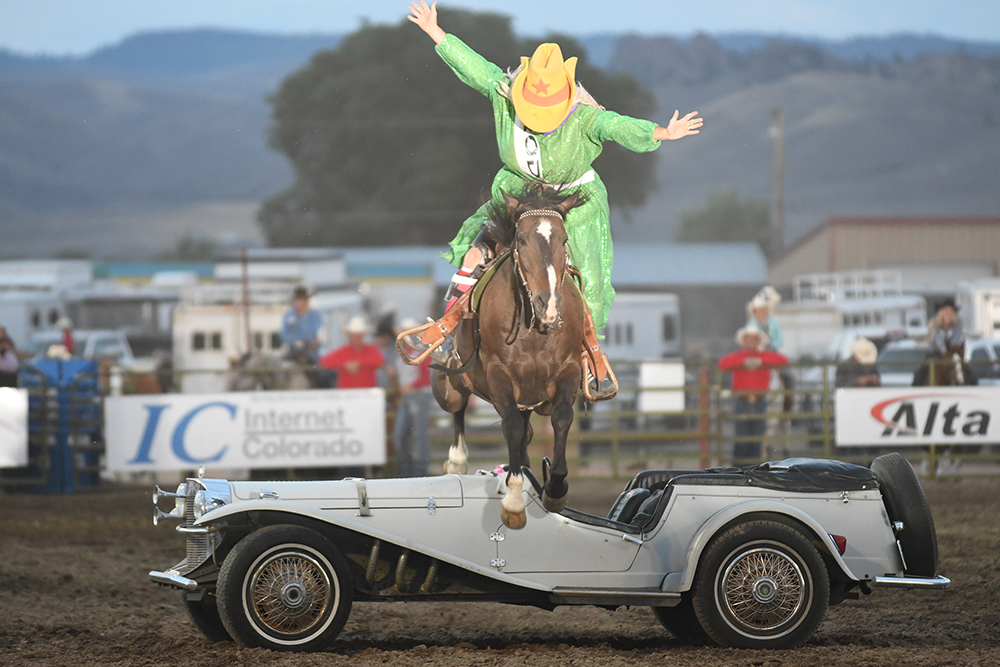 GUNNISON, Colo. – John Harrison has a lot in his bag when it comes to entertaining, and that’s why he will return to Gunnison for this year’s Cattlemen’s Days PRCA Rodeo.

He’s an athlete, trick rider, rodeo clown, barrelman and comedian, all rolled up in a package that’s both fun and funny. He will be one of the featured pieces of this year’s rodeo, set for 7 p.m. Thursday, July 11-Saturday, July 13, at Fred Field Western Heritage Center in Gunnison.

“We had John here last year, and we realized quickly that he’s someone we want to have back again,” said Kevin Coblentz, president of the volunteer committee that produces the annual rodeo. “He has the perfect personality for our rodeo, and his comedy is family friendly, which is exactly what we like to see.”

Plenty of athletes will be part of Gunnison’s rodeo, an attractive spot for many in the game to play at the professional level. With a record purse available this year, hundreds of the top cowboys and cowgirls will make their way through the Rocky Mountain passes to ensure their chance at those dollars.

But Harrison might be the most athletic of them all, and he utilizes that in some comedic ways to produce an award-winning showcase throughout each of the three performances.

He is a four-time winner of the Professional Rodeo Cowboys Association Comedy Act of the Year and a three-time winner of the Coors Man in the Can award, an honor bestowed upon the top barrelman in ProRodeo based on peer votes. He also has worked the barrel at the National Finals Rodeo three times. But those awards don’t define the third-generation cowboy.

“I love my job, but the best part is the traveling and doing things with my family,” Harrison said. “There’s the stress of getting animals and everything ready for a performance, but the reward is great when the crowd comes out to enjoy the rodeo.

“For two hours, they get to get away from their life, and I’m glad I can be part of it.”

Raised in Soper, Okla., to a rodeo family, Harrison began his entertainment career as a trick rider. He joined the PRCA in 1999, and within five years, he had transitioned to being a clown and barrelman. It provided greater opportunities and has allowed him the chance to showcase the funny side of his amazing abilities.

“Everything’s changed since I first started clowning,” said Harrison, 40, the grandson of 1962 world champion bull rider Freckles Brown. “What brings me the most joy is for all of us to be on the road and getting to do things as a family. I love that my kids are with me for the summer run. They’re going to have memories that will last forever.”

They will be with him in Gunnison, and he’s excited to be part of the historic event.

“It is a traditional rodeo with a great feel to it, having the track that runs on the outside of the arena,” Harrison said. “You can’t beat being in the Rockies in the middle of the summer. Plus, I think the traditional rodeos are always fun to work.”