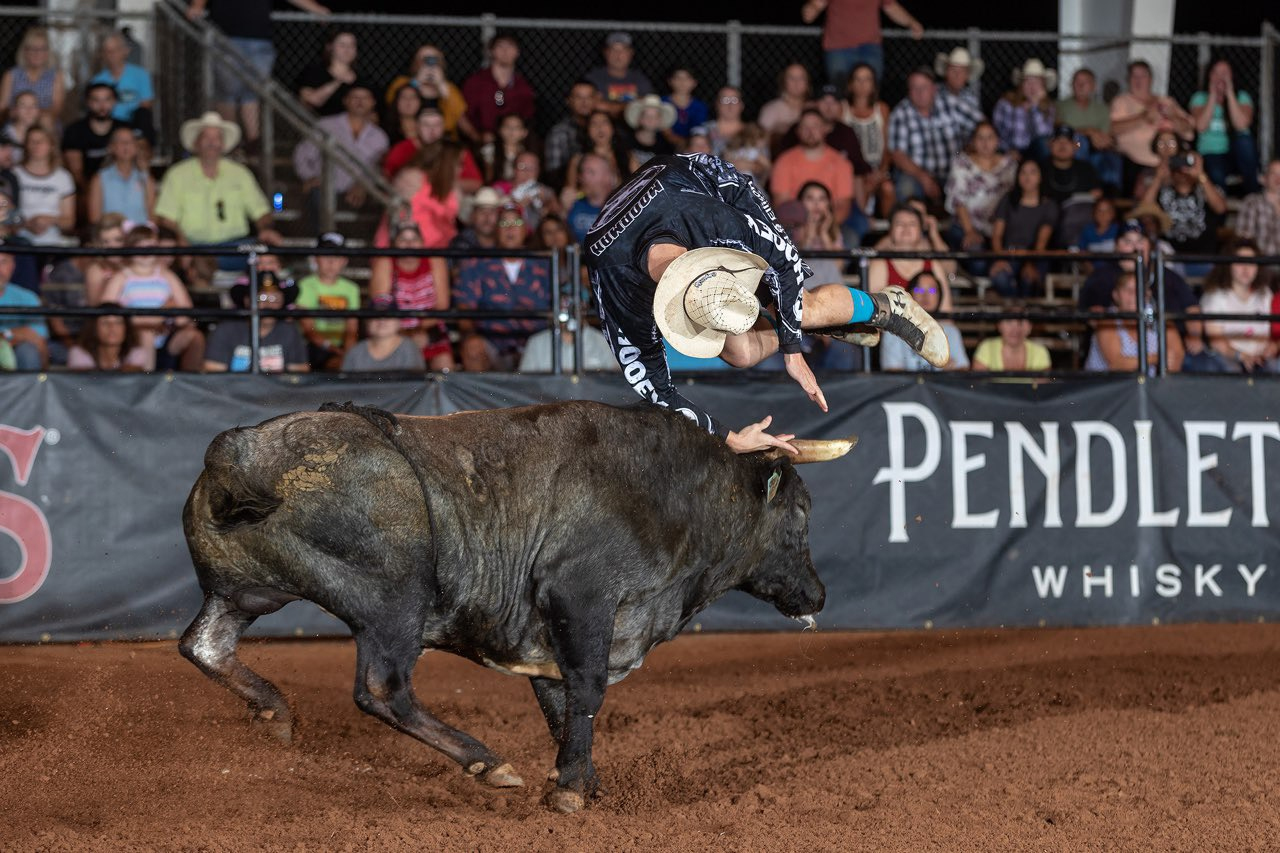 Gainesville stop was a Classic in every way possible

GAINESVILLE, Ga. – Luke Kaufman and Ross Hill made clear statements about the Bullfighters Only Southern Classic presented by Franklin County Livestock this past weekend.

“I’ve watched bullfighting very closely for the last 15 years, and that was probably the rankest 20 bullfights in one night that I’ve ever seen,” said Kaufman, BFO’s production manager. “I’ve watched every Wrangler Bullfight Tour tape there is, every stand-alone bullfight there’s been, and I don’t think I’ve ever seen that in one two-hour show.

“We had a guy score 88.5 points in a three-man bullfight, and he finished in last place. That was insane.”

Hill has been around the game longer and still stands as a wily veteran in the BFO. He’s seen thousands of bullfights and hundreds of events over his storied career, and even he was in awe of what happened in Gainesville.

“Without a doubt, it’s one of the top bullfights I’ve seen in my career,” said Hill, a BFO pioneer from Muscle Shoals, Alabama. “Just watching everybody step up was great, then you got to see the young guys just now coming up and stepping into it all. It was just amazing, and it goes back to what we’re doing with the Development Camps.”

Of the men in the field, many were former BFO D-Camp participants. Fifteen qualifiers battled on Friday night to fill five spots in the field with the top 10 men in the BFO Pendleton Whisky World Standings on Saturday night. Many of them had been through the camps.

“Chance Moorman went out there and was 91 points twice,” Hill said. “When you see him lay down two front flips and do what he did with that bull, he could have just led that bull around with a lead rope. That was one of the coolest events I’ve ever been to.”

Moorman earned his victory in style. Being 90 points in any bullfight is tough, and to do it twice in one night is incredible. But what was bigger was that he was part of the greatest three-man round in BFO history. While his 91-point bout won the round, first-timer Dekevis Jordan was 90.5 to finish second and three-time world champion Weston Rutkowski was 88.5 points to finish third.

“When I saw that I was in the same round with Weston in both Reno and Gainesville, I knew it was going to be really good,” said Moorman, 18, of Lytle, Texas. “When I saw that Dekevis was drawn into our round after he came out of the qualifier, I knew it was going to be a very tough round. We had the three-time champ and two young kids that like to jump out of the building.”

It certainly was electric.

That happened in both height and performance for Moorman and Jordan, the latter of whom just completed Development Camp earlier in June and was competing at his first BFO event.

“It was pretty awesome to be part of that, a dream come true,” Jordan said. “It was a blessing, and those guys made me feel like I fit right in.

“There was a lot to learn over the weekend. I haven’t been around that many people in a professional event like that. It was new to me, and I’m the newest guy on the team. I’ve got some adapting to do. I learned that you enjoy everything that’s going on and that at the end of the day, you’ve just got to fight your bull.”

It came down to basics for many, but there were big dollars up for grabs. For winning the Southern Classic title, Moorman pocketed $12,000 and moved into the No. 2 position in the world standings. He now trails the top dog, Aaron Mercer of Calgary, Alberta, by $4,000.

“That’s just a crazy feeling,” Moorman said. “I’ve gone through a rough patch. I’ve been drawing on the smarter set of bulls, and I’ve been getting thrown around. To come in here and put it all on the line and come out with the win and be second in the world is just crazy.

“I didn’t know if there was any way I could put myself back in close of reach of that world title, but here we are. It’s going to be a crazy summer.”

The money is a great incentive. BFO paid out more than $60,000 this past weekend with over $30,000 paid in Gainesville; the largest payout of the summer run of freestyle bullfighting. But there are hundreds of bouts that lie ahead before the world champion is crowned at the Tropicana Las Vegas in December.

“The one thing about what we saw in Gainesville is the young talent that can really play this game,” Kaufman said. “It was almost like a passing of the torch. To see Ross, Weston and Toby (Inman) out there doing the best they can, then you see these 18-year-old and 19-year-old Chance and DJ out there letting it all hang out.

“There are two kinds of bullfighters out there: Those that have seen it all, and those that are too young and dumb to know better. They came together pretty good.”

It bodes well for what’s coming in freestyle bullfighting. The BFO was created four years ago and has quickly become the face of the game. It has rebranded and helped regenerate an audience, and the top men in the game earn their way to specialized events like the one in Georgia.

“This is the gateway for the BFO to come to the East Coast,” Kaufman said. “We’ve done the Speedway Series down here, but I would compare that to the Wrangler Bullfight Tour in that it is an added attraction to an already-established event.

“To put on a production like we did gave fans something special to watch. We’ve got the bullfights, the production and the live streaming. That’s as good of a broadcast as we’ve done, and that’s cool. The BFO is pretty pumped to get that content out there in that sort of form. We want people to watch it all year long.”