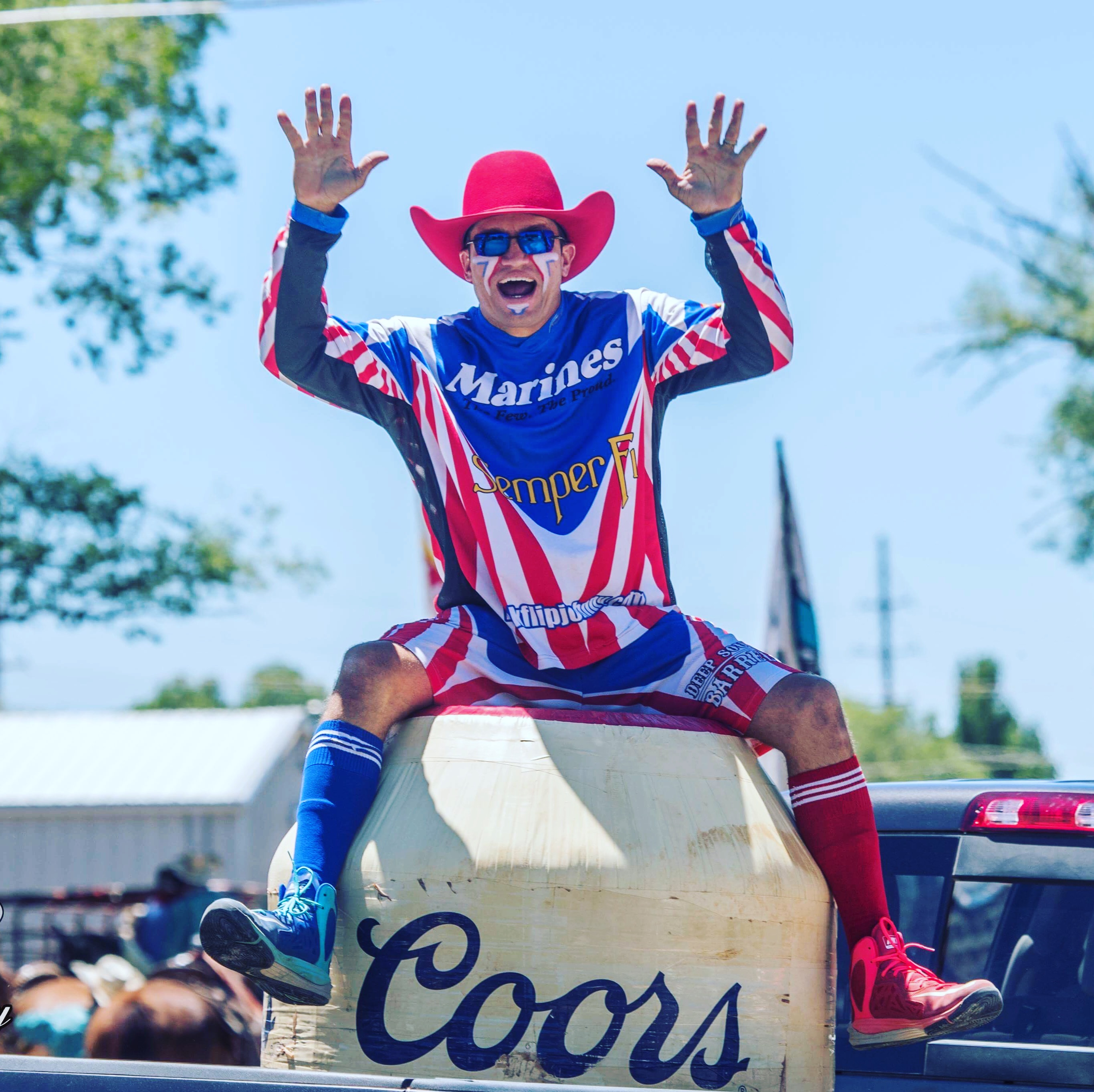 DODGE CITY, Kan. – The first time Johnny Dudley appeared at the Dodge City Roundup Rodeo, he was cast in a supporting role.

Five years ago, Dudley spent a portion of his week in Dodge City visiting celebrated rodeo clown Justin Rumford, who then put Dudley into one of his acts.

“My family and I left Joseph, Oregon, heading to Leoti (Kansas),” he said. “My wife and Ashley (Rumford) are best friends, and Rump and I are great friends. He asked me to do his cheerleading act, so I acted like a drunk guy and did a backflip off the top of the gate.”

It was a hit, but that’s not why he’s returning half a decade later. It’s the comedy and acts he provides that makes him a sought-after entertainer in rodeo.

“We really like what we’ve seen and heard about Johnny,” said Dr. R.C. Trotter, president of the volunteer committee that produces the annual rodeo. “We believe he will interact well with our team and our fans.”

That’s the mark of a good entertainer, and Dudley has been recognized as such. Just last year, he was nominated for the PRCA Clown of the Year and Comedy Act of the Year. While it’s nice to have that added to his name, it’s not what defines the man from Denton, Texas.

“All the buckles and glory and big rodeos are things that most rodeo clowns want, but I just want people to say I’m a good guy,” Dudley said. “Everybody wants to be recognized in their field, but at the end of the day, I’m just out doing my job.  But with that recognition, other people see that, and it leads to bigger and better rodeos, which leads to more money, which leads to my family having a better life.

Known by the moniker of “Backflip,” family is the most important part of his life. When he can, he tries to spend as much time with his wife and two boys as possible. But life in rodeo oftentimes means being away from loved ones for an extended time.

“My boys are 3 and 5 now, so they’re at the point when the realize that Dad’s leaving,” he said. “I grew up in a single-parent home. When I was a kid, I never had anybody teach me how to fish or play baseball with me. I always said I wanted a boy that I could enjoy the outdoors with. Now that I have a 5-year-old that wants to do that, I try to make all the time I can with him.”

A former Marine, he knows that being on the road is the best way he can support his family. But when one is good at his job, he knows a busy schedule is important.

“The best part of my job is just getting people to laugh,” Dudley said. “When people come to a rodeo, I don’t know the difficulties they have in their life. For two hours, if I can help them forget about that and laugh and smile, then it’s worth it.

“In the stands, there might be a millionaire sitting next to a broke person. For those two hours, those same people are sitting side by side enjoying the same thing.”