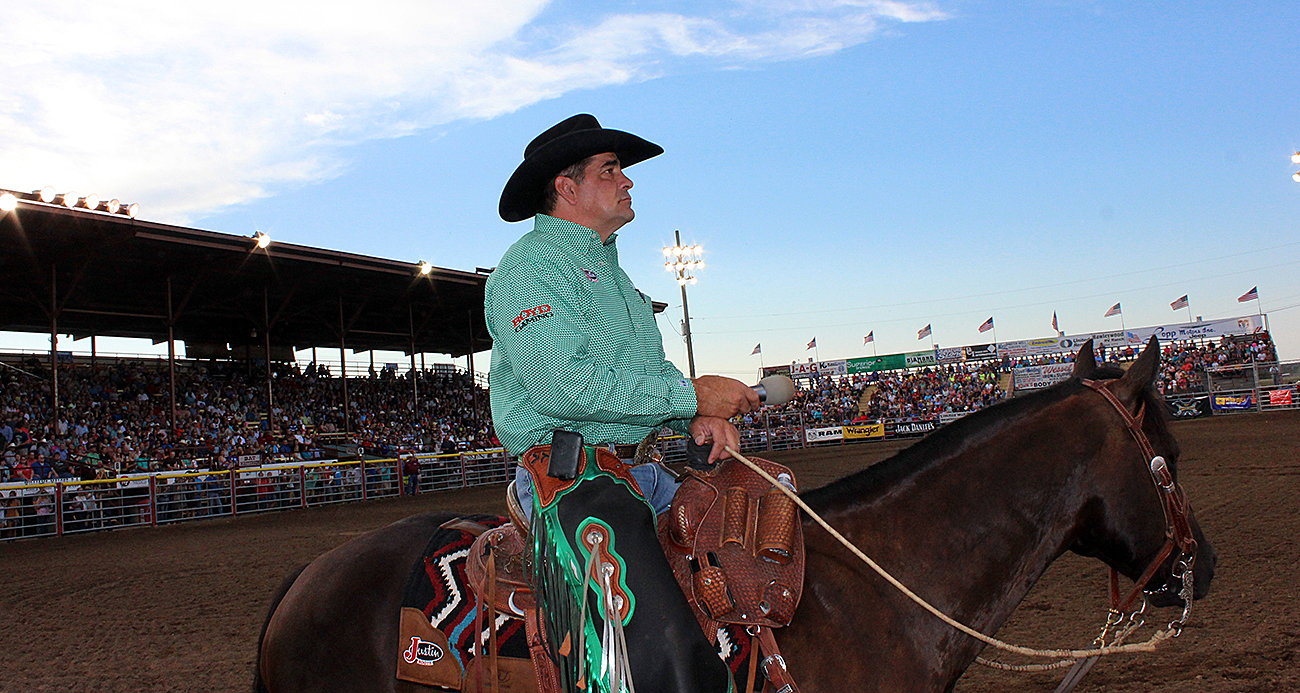 DODGE CITY, Kan. – Boyd Polhamus has been the voice of ProRodeo for many years, having called the National Finals Rodeo 21 times in his storied career.

He’s been the voice of Dodge City Roundup Rodeo the last two decades, lending his talents to one of the greatest events in the sport. He’ll return to western Kansas for this year’s event, set for 7:45 p.m. Wednesday, July 31-Sunday, Aug. 5, at Roundup Arena.

“Boyd is just part of the Roundup family,” said Dr. R.C. Trotter, chairman of the volunteer committee that produces the annual rodeo. “Boyd came to us in 1999, just four months after the death of Phil Gardenhire. He’s been here ever since, working with the great Clem McSpadden for about 10 years.

“He worked great with Clem, but he does a great job for us all on his own. He adds something very good to our show.”

For now, though, he’s done calling the action in Las Vegas, because he has a bigger job. He’s been named the NFR’s general manager, replacing longtime GM Shawn Davis, who held the post for 34 years.

“That says so much about the respect the people in rodeo have for Boyd,” Trotter said. “He understands the importance of that event to our industry, so he’s the perfect man to fill that role.”

Polhamus grew up in Wisconsin, rather distant from the rodeo-crazy Southwest. But a fire began to burn.

The game involved cowboys and cowgirls, bucking horses and nasty bulls. Polhamus lived it. He qualified for the National High School Finals Rodeo in six events his junior year and went to college in Texas to chase his rodeo dreams. It was there that his connection to rodeo changed from contestant to announcer, urged a little bit by classmates and his coach.

“I remember back in college where we were out in the practice pen, and he started saying these things about everybody,” said Benje Bendele, the premier sound director in ProRodeo who has worked Roundup Rodeo every year since 2000. “From that point on, we all knew he had a gift, not only announcing and providing information to rodeo fans but entertaining them along the way.

“I think he started taking it serious from that point on.

Besides the NFR and Roundup, Polhamus has been the arena announcer for big rodeos in Houston, Denver and Pecos, Texas, to name a few. He has been named PRCA Announcer of the Year four times, and the WPRA has selected him as the announcer of the year three times.

“Yes, this is a sport, but this is also a show, and it’s entertainment,” said Bendele, who attended Southwest Texas Junior College with Polhamus. “This is a show like someone producing a TV show. We’ve got to do it right every time; there is no margin for error. He helps us being the contract personnel. He helps me in the music; he helps the clown; he helps the scoreboard operator; he helps the people behind the chutes.

“Boyd demands the quality of excellence from everyone without speaking a word, and he gets it because of the respect everyone has for him. He realizes that every show is a new show to the fans and that we must put on the best production every time.”

Besides expertise, he carries a passion for rodeo. More, he adores the people involved in the sport, from the contestants to the personnel to the fans.

“Boyd is a true rodeo fan, and he wants the people who buy a ticket to understand his excitement about a match-up,” Bendele said. “He puts his own excitement out there, and he pulls the fans into that excitement.”