Smith eager for return to NFR 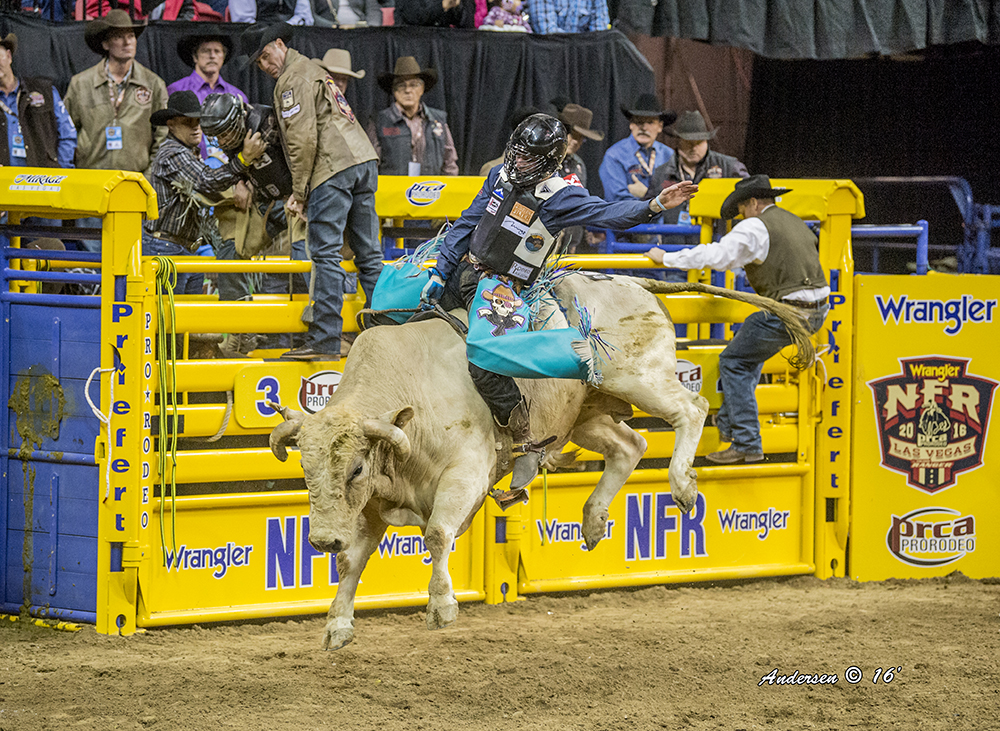 REXBURG, Idaho – After injuries kept him from qualifying for the 2018 National Finals Rodeo, bull rider Garrett Smith was a man on a mission.

A fractured pelvis suffered at Couer d’Alene, Idaho, in August 2018 forced Smith to miss the final month of the regular season, and he finished 23rd in the world standings – only the top 15 cowboys on the money list at the conclusion of the regular season advance to ProRodeo’s grand finale.

He more than made up for it this year.

“I finally got healthy the last month of this year,” said Smith, 24, of Rexburg, who returns to the NFR for the third time in four years. “You’ve got to learn to ride when you’re not healthy, but it makes a huge difference on how you ride when you’re healthy. It helped to have a good last month, and it was a lot more fun.

“That last (two) weeks of September, I won the four rodeos I entered.”

“The money is crazy this year,” he said. “There’s no one that would have thought it would take $100,000 to make the finals. That’s how tough the bull riding is getting and how much these rodeos are adding for us as far as money. They’re helping us out tremendously.”

“Added” money is how much cash each committee puts into the pot, which is added to the contestants’ entry fees to make up the total purse. The more money that’s added at a rodeo, the more attractive it is for the cowboys to attend. After all, this is how they make a living.

“This is really good for rodeo, and I think it’s just going to keep getting bigger,” he said. “It’s great to be part of it. There’s no telling what the future will hold for bull riding and the PRCA.”

Money doesn’t just pay bills and cover the expenses that come along the way, but dollars equal championship points. The contestants in each event that finish the year with the most money won will be crowned world champions.

He’s been close before. He finished the 2017 regular season No. 2 in the world standings, then suffered an injury at the NFR and fell to fifth despite winning a round, placing in two others and finishing eighth in the average standings. He finished the 10-round affair, then opted for surgery afterward.

This year, he’ll have some ground to make up once he arrived in Las Vegas. He trails the leader, five-time world champion Sage Kimzey by more than $121,000, but that ground can be made up inside the Thomas & Mack Center. If everything goes his way, Smith can catch Kimzey by the halfway point of the 10-round championship.

“This NFR probably means more to me because I came through so many injuries to come back for it,” said Smith, who credits much of his success to his sponsors, Idaho Project Filter, CINCH, Resistol, Rodeo Vegas, Rodeo Tax, Rodeo Graphics, Truth Bucking Stock and Streamline Sports Chiropractic & Physical Therapy.

“I’d just like to finish it healthy once; that would be nice.”

This might be the first year he enters ProRodeo’s marquee event in perfect health, but he didn’t start this season that way. He tried to return to action a little more than two months after his 2018 injury, but that didn’t work out. He came back in January, but that, too, was early. He didn’t come back again until late February, then went on a tear.

That included his victory at the RAM National Circuit Finals Rodeo, where he pocketed just shy of $30,000.

“It’s hard coming off an injury, because you don’t know what’s going to hurt,” he said. “I was kind of hesitant. If you’re hesitant in this deal, it doesn’t work out a lot.

“Winning the RAM Finals was huge. That helped me out not only in the standings, but also confidence-wise. When you’re hurt for that long, you’re waiting for that one big win that helps you out.”

Smith has learned to overcome adversity and adjust to obstacles that have come is way. He’ll have to likely do both at the NFR, the most stressful 10 days in the game. It’s been three decades since a cowboy has ridden all 10 bulls in Las Vegas, so it’s a tough stretch for any man in the mix.

“I was on a roll going into the finals in ’17, so that was probably the best year I’ve ever had,” Smith said. “Just to make it back this year is just going to be awesome.”

Through every surgery, every recovery, every bad stretch, he has had many people he’s leaned on, whether it’s his father, Lynn; mother, Valorie; or brothers Wyatt and Payson. Wyatt Smith was a 2014 NFR qualifier in steer wrestling, and Garrett served as his hazer during the final five rounds.

“I don’t really know where I’d be without them,” Garrett Smith said. “Having Wyatt make it and show us the way is big. Payson is always there for support. What means the most is having someone to call and talk to. You give those guys a call, and they’ll cheer you up right and keep you humble.

“I’ve also got a bunch of support from Allen Teller; that’s who I have all my bulls with. He’s like a second dad. He’s the one who taught me all about bull riding and keeps my head where it should be. Without him, I wouldn’t be anywhere.”

Whether they’re with him in Vegas or cheering him on from a distance he understands how important they are to his career. Now, he’ll make a run at the $10 million purse.

“A lot of what changed for me this year was mental,” he said. “I stopped overthinking. I went back to my normal stuff, which was not caring so much. Whatever happens is going to happen. As long as you can keep your hand shut and try your hardest, it’s all going to work out.”