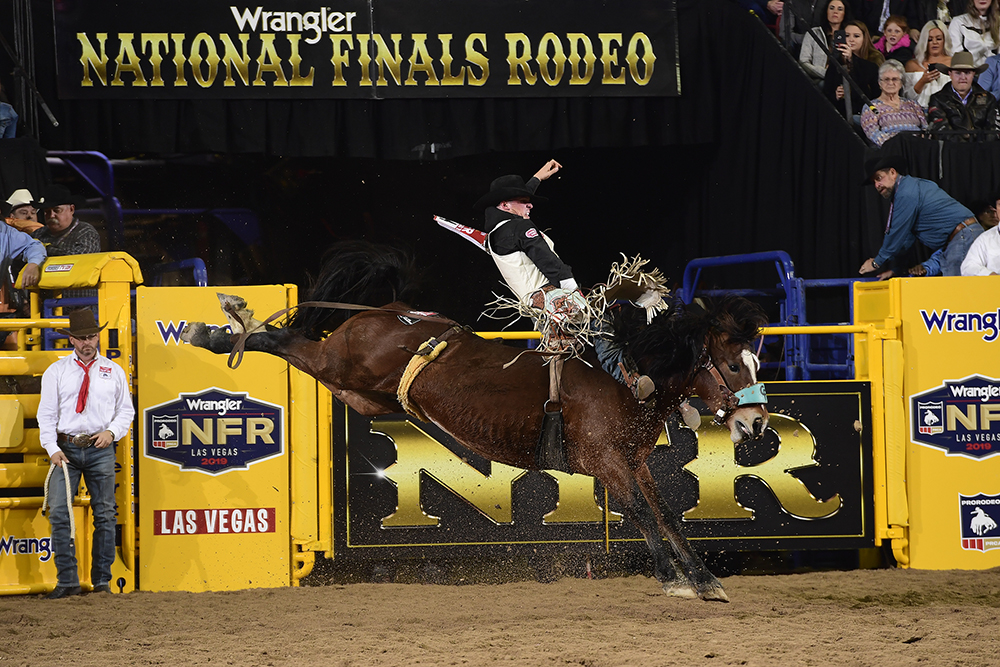 “Nightlivin is out of the right-hand deliver and usually does the same thing Night Crawler does out of the left,” said Champion, 26, of The Woodlands, Texas, now living in Stevensville, Montana, with his newlywed bride, Paige. “Nightlivin is just a little young and had an off day, but I was definitely excited to see Night Crawler for the reride.”

It paid off. He posted a 91.5-point ride to win the opening round by just a half point over the No. 1 man in the game, Clayton Biglow. Champion pocketed $26,231 and pushed his season earnings to $167,060. What’s more impressive, though, is the three rides that were at least 90 points in the first round.

“That first round was crazy; we strive for that caliber of horse,” he said. “That’s a testament to the work the guys are putting in and all the contractors and all their breeding. I told the guys when we put this pen together that there is not a horse I wouldn’t want to get on. I don’t know if it has ever been quite this good.

“I think round for round, the quality and the competitiveness between guys and evenness among horses, the level is going up. It’s exciting to be part of.”

Even if he had to get on two horses in the opening night.

“Getting on that second horse definitely wasn’t any less nerve-wracking,” he said. “I had the NFR jitters, and the first one’s out of the way. When you find out you have that kind of opportunity, especially after what had just been done, I was pretty excited to get on another horse.”

He has learned to make the adjustments necessary to compete in ProRodeo’s most elite level. He first qualified for the NFR in 2014, and this marks his fifth trip to Las Vegas in six years. He’s won a boatload of money in Sin City, and he has nine more nights to keep adding to that total.

“The more you do something, the better you get at it, so I hope I’m still improving every year,” Champion said. “We’ve got new guys coming in like Clayton Biglow and Taylor Broussard that are constantly stepping up their game. If you want to stay relevant, you have to keep evolving and changing and pushing the envelope.

“Everyone in that (locker) room is doing it, so you might as well get on board.”