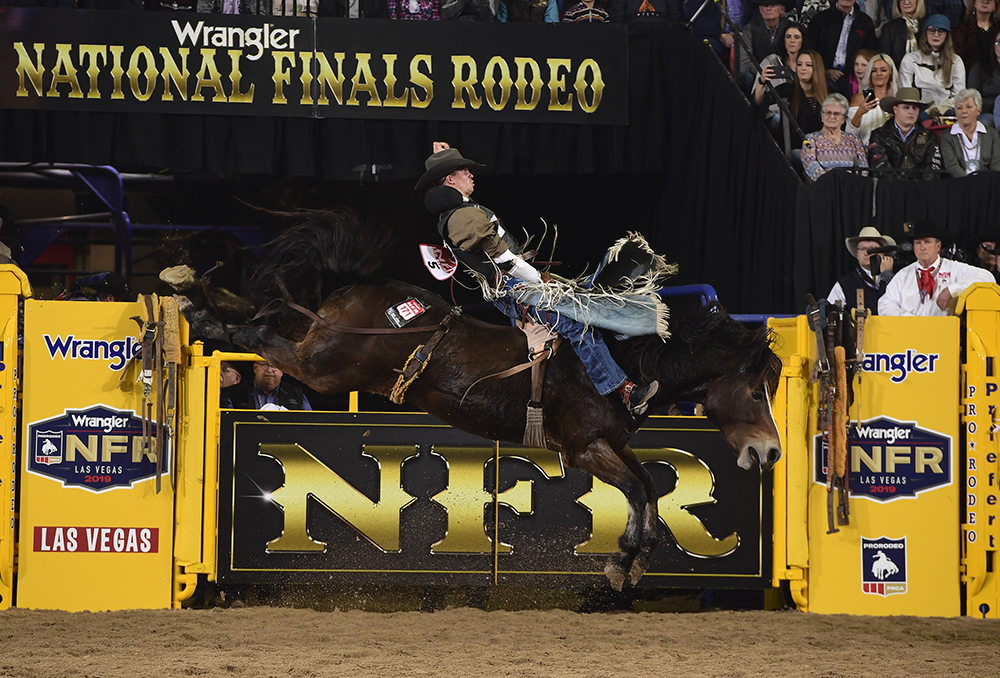 LAS VEGAS – The difference between winning the first round of the National Finals Rodeo and finishing in a tie for sixth place was just four points.

Or in a single slip from an athletic bucking horse.

“We got started, and I’ll take that,” said Larsen of Inglis, Manitoba, now living in Gering, Nebraska, with his wife, Alexa. “I think anyone who makes the finals on numerous occasions still gets the first-round jitters. I was fortunate enough to get on at the Canadian Finals (Rodeo), so I worked some of the kinks out as I went along.

“But it’s still nothing like bucking at the Thomas & Mack. To get a score like 87.5, I’m pretty tickled.”

“That’s just rodeo,” he said. “To get a score like 87.5, I’m pretty tickled. It just shows that the horsepower I had there that I can get that kind of score after the horse slipped.”

He has pushed his season earnings to $185,558 and still sits third in the world standings, less than $550 behind the No. 2 man, Kaycee Feild. Larsen is chasing a world championship in Las Vegas, chasing his dreams, but he also knows he rides for something else.

Family has always been something special for the Larsen clan, who grew up in Manitoba on the family’s ranch. Orin’s older brother, Tyrel, and Tyrel’s wife, Chaney, are expecting their second child and recently learned that the baby suffers from spina bifida in utero; Chaney Latham will have surgery next week at The Johns Hopkins Hospital in Baltimore to help the fetus as much as possible.

“Tyrel and Chaney have thousands and thousands of prayer warriors out there for them,” Orin Larsen said. “That baby, no matter how it comes out, will be perfect the way he is. I’m pretty excited to meet him in March. We just pray the surgeons will do the best they can for what they are dealing with, and everything will go as smoothly as possible.

“My mom is torn between staying for the NFR and going to Johns Hopkins. I told her, ‘You better get a plane ticket before they sell out,’ so I think she will do that. If I wasn’t competing, I would be there, too.”

That bond between brothers is strong, and it’s vital for each family members’ success. Rodeo has been part of that. In 2015, both Orin and Tyrel (saddle bronc riding) qualified for the NFR.

“Family has been a huge thing throughout my career,” Orin Larsen said. “Whenever you see one of your own kind in danger, you have a pretty large obstacle in your way, so you do whatever they need you to do at the drop of a hat. Tyrel and Chaney both know we would bend over backwards multiple times for them if they needed it, and they would do the same for us.”

For now, though, he is focused on the tasks at hand, and that’s riding bucking horses for another nine nights to try to reach that most cherished prize, the Montana Silversmiths gold buckle that is awarded to the world champions.

“You have to enjoy this experience,” Larsen said. “That’s it. It’s not going to last forever. It’s kind of funny to think I’m 28 years old and in the second half of my career. Once your career is done, you just have the memories, so I’m just soaking it all in and enjoying myself.”