Struxness strikes for 2nd at NFR 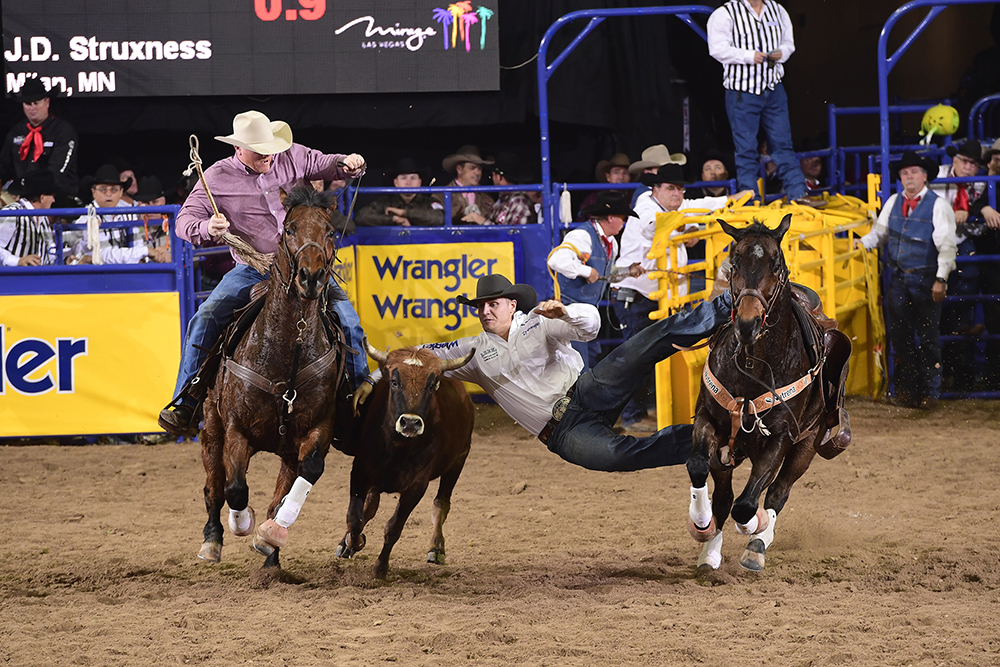 LAS VEGAS – The obstacles that come any contestant’s way at the National Finals Rodeo can be varied and be plentiful.

That’s why a simple-but-straight-forward approach is best when competing at ProRodeo’s grand finale. It’s what has worked for steer wrestler J.D. Struxness in his two previous qualifications to Las Vegas, and it propelled him to a top payday during Thursday’s first go-round.

He stopped the clock in 3.8 seconds to finish in a tie for second place in the opener of the 10-day marathon, collecting $18,192 in the process. That pushed his season earnings to $111,022 and moved him to seventh in the world standings.

“It feels great to get a good start, make a nice run,” said Struxness of Milan, Minnesota, now living in Alva, Oklahoma, home of his alma mater, Northwestern Oklahoma State University. “I broke the ice and got some good money.”

It came down to strong fundamentals. He called his first-round steer one that was in the middle of the pack in the herd.

“You want to place on the really good ones and stay in the average on ones that are a little stronger,” he said. “I think getting a good start and getting close to the barrier was the key. The horses worked good. They let us catch up and do a good job on the ground. Everything went as planned.”

In rodeo timed events, the steers and calves are afforded a head start, with a barrier rope crossing the timed-event box that signals whether or not the animal was provided the appropriate advantage. A good run means the horse’s shoulders hit the barrier at the same time it is released.

Leaving too late means playing catch-up, and inside the Thomas & Mack Center, that likely will leave cowboys out of the money. Leaving too early and breaking the barrier results in a 10-second penalty, which not only would hurt chances at round money but also likely would hamper the chances of catching an average payout at the end for having one of the top cumulative times on 10 runs.

“Stockton (Graves) and I were watching videos of him, and we thought we had a good chance to catch up with him,” Struxness said of his coach at Northwestern, who is serving as hazer at the NFR. “Having a good hazer out here is important. Their job is tough, because we’re actually going before we nod, and we know when we’re going to nod. They have to get a start with us.

“Stockton did a great job last night. Having a guy and a horse that do that on the other side is great. It helps speed everything up.”

Graves is a seven-time NFR qualifier, and Struxness was the first Northwestern cowboy to win a national title, having done so after winning the bulldogging title at the 2016 College National Finals Rodeo. Struxness is riding Graves’ horse, Freeway, while the coach is riding a haze horse owned by Kody Woodward.

“Our main concern was to get that start and make a solid run,” Struxness said. “We wanted to break the ice and make sure we hit that start like we did. We knew if we did that, our confidence would be up, and we could roll through the week.