O’Connell is voracious for gold 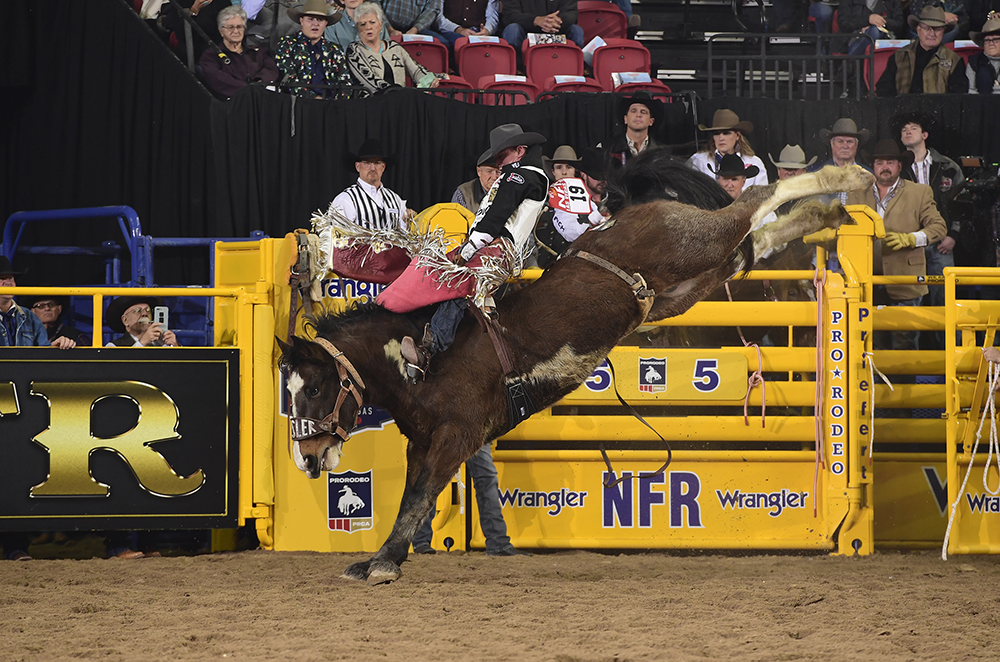 LAS VEGAS – When Tim O’Connell returned to the game in June after rehabilitating an injury he suffered a year ago at the National Finals Rodeo, he was hungry for a fourth straight world championship.

Through two nights of ProRodeo’s grand finale, that voracity has grown.

“I’m starving,” said O’Connell, who rode Kesler Rodeo’s Uptown Flash for 89.5 points to finish as the runner-up in Friday’s second go-round of the NFR, his second straight paycheck in as many nights. “Keep feeding them in here, because I’m coming.”

“My feet feel fast; they feel deliberate,” said O’Connell, 28, of Zwingle, Iowa. “I had two great horses to start this thing off. I couldn’t be more excited about how they both went. I was honestly a little upset with myself how I rode (Thursday) night to finish that horse. I made some corrections (Friday), and I feel like I made a great ride. I feel like I really finished him off.”

His three Montana Silversmiths gold buckles are proof that O’Connell is one of the best in the game at making modifications.

“I have prepared myself to be the very best in the world on five different calibers of horses,” he said. “This is a different caliber than (Thursday) night, a different riding style, but I take what I did and the mistake I made into consideration with the horse I have under me. I felt like it was a smarter move.”

On his opening-round horse, O’Connell got flashy, opening his legs wide to create exposure between him and the animal on each spur stroke. That can be appealing to judges, but it also can put the cowboy in a compromising position.

“The judges weren’t marking you for getting extra exposure,” he said. “When that horse shot forward and left me that last second and a half, it cost me. That half second could have cost me a half a point, which cost me about $7,000.

“That $7,000 might mean a world title, so what I did (Friday) was make sure I stayed gathered up. I just (spurred back) to my rigging, exposed out and (pushed my feet) down to make sure I beat that horse to the ground every jump.”

“We’ve got our buckers (Saturday),” O’Connell said. “Truthfully, that’s where you separate the guys that really put in the hard work compared to the guys who didn’t.