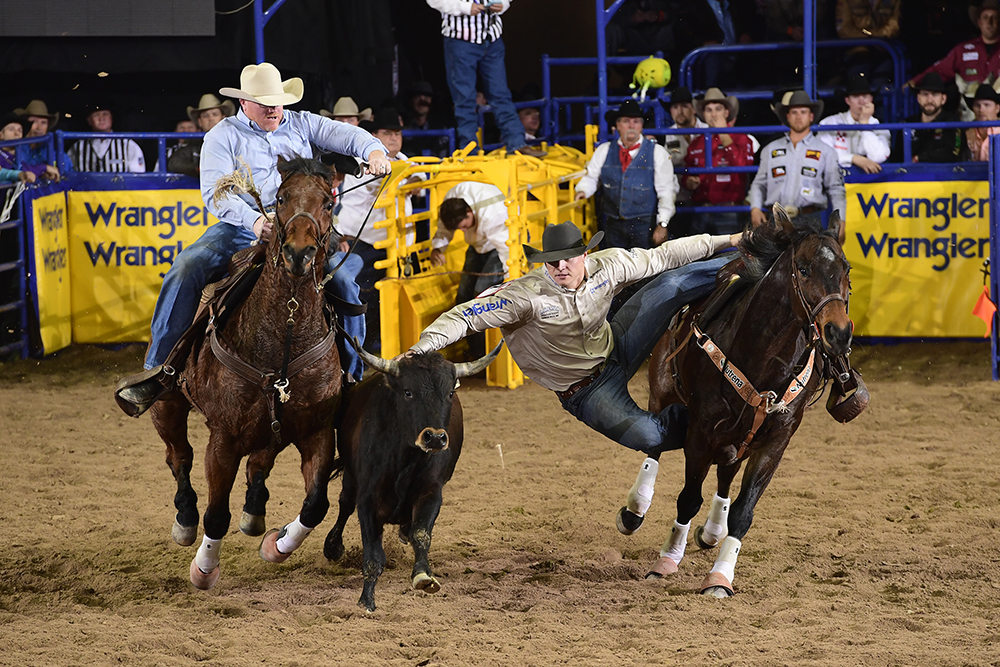 LAS VEGAS – The National Finals Rodeo can be a vindictive setting for ProRodeo’s greatest stars.

The best way to combat that is to find the positives in every situation that arises. That’s vital, because hitting the dirt one night could disappear with a championship ride the next. If that’s not enough, there’s a great incentive each round, with go-round winners pocketing $26,231.

“It’s really important to stay positive here,” said J.D. Struxness, who cashed in for the second straight go-round Friday night to kickstart his run through the NFR. “I felt like we had a decent start tonight; maybe not the best we needed but still decent. To get here and place on them and keep the ball rolling is important.”

He rolled to a 4.3-second run, finishing in a three-way tie for second place in the round. With that, he pocketed $15,795 on Friday night and pushed his season earnings to $126,816 – nearly $34,000 has come in the opening two rounds of this year’s championship.

“It was kind of rough from the beginning, and my steer ran pretty hard,” he said. “I ran him down a way and was still able to be 4.3 on him. I’m thankful for that, and it placed me in the round. I was able to set the pace, and then it got rolling after that.”

Prior to his run, the fastest time posted was Matt Reeves’ 4.7, so Struxness set the mark. Two-time world champion Tyler Waguespack upended the standard, posting a 3.6 to win the round and the lion’s share of the payout.

Now, Struxness has eight more nights to step up his game. He now sits fifth in the world standings and trails the leader, Ty Erickson, by less than $30,000.

“To keep that going, we just have to keep taking those cuts at the barrier, getting the best start we can and keep throwing the steers down,” said Struxness, 25, of Milan, Minnesota, who is utilizing his former rodeo coach, Stockton Graves, as hazer to help keep the steers lined up each run. “Stockton has done a great job taking care of the horses and making sure they’re ready every night.

“Having someone who has been here and done it before, I know our horses are working good. He knows what to do hazing for me, and we just go out there and give them hell every night.”