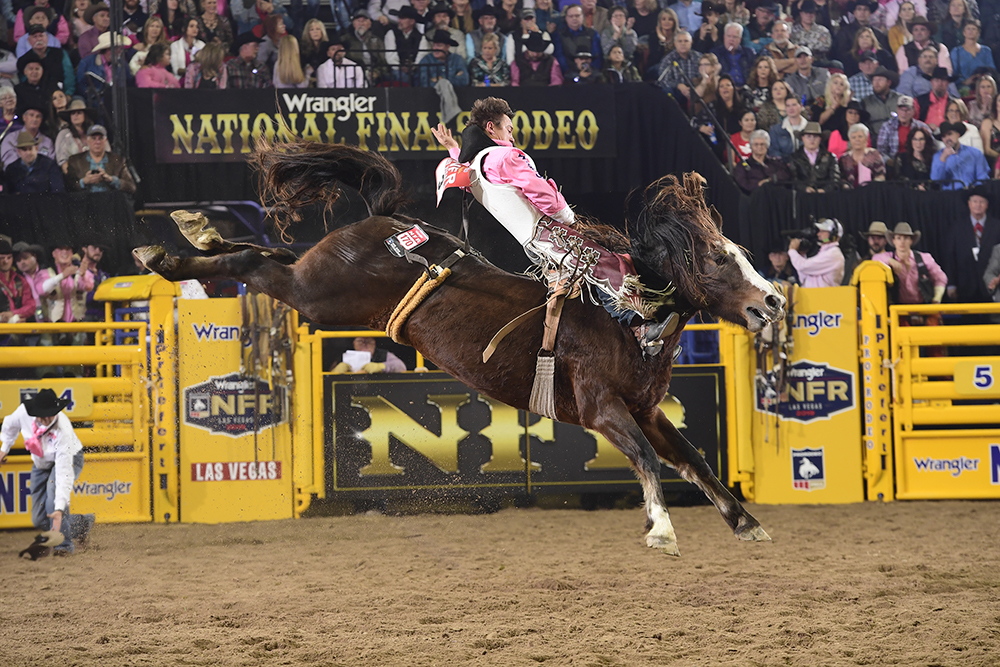 On Monday, he came within half a point of that mark to win the fifth round for the second straight year. He scored 92.5 points on Pickett Pro Rodeo’s Scarlett Belle to claim the top prize, $26,231.

“They’ve won four or five rounds on her before I got her,” said Biglow of Clements, California. “She has tied me; I’ve been on other horses and split two rounds here, and the other guys had Scarlett Belle. I finally got my shot at her.

“Every time they nod their head on her, she is going to be great. I think she has a better trip tonight than she usually does. She was outstanding. She rode like a dang Cadillac.”

While the powerful mare seemed like a luxury car, the cowboy has been driving like a NASCAR champion. He’s placed in three of five go-rounds, and his victory was the first of this year. Alas, it’s just a continuation of an outstanding regular season that saw him enter his fourth NFR No. 1 in the world standings.

He just extended his lead and, almost as importantly, moved into the lead in the average race. He has ridden five horses for a cumulative score of 435 points, a point and a half ahead of Tim O’Connell and Trenton Montero.

Another telling statement is he was just the biggest of many big scores. In fact, the fifth round featured four rides that were 90 points or better. At most performances of the NFR, an 89-point score will be the winner, but not in 2019; on Monday night, Richmond Champion’s 89 was good enough for sixth place, the last spot to catch money.

“Man, this was so much fun,” Biglow said of his ride on Scarlett Belle. “Virgil was great, but that was just as great. It felt awesome.”

Last December, he set the standard on Virgil, a horse of the year from C5 Rodeo. He offered a comparison between the two bucking beasts.

“He was more of a bucker than Scarlett Belle, but she was a lot nicer to ride,” he said. “They started out at 89.5, and they could only go up from there.”

“All those guys back there knew we had that kind of horsepower. We put these horses together. We know each and every one of them is going to be outstanding. Those guys are so dang good now, the best spur ride is going to win. The match-ups were great tonight.”