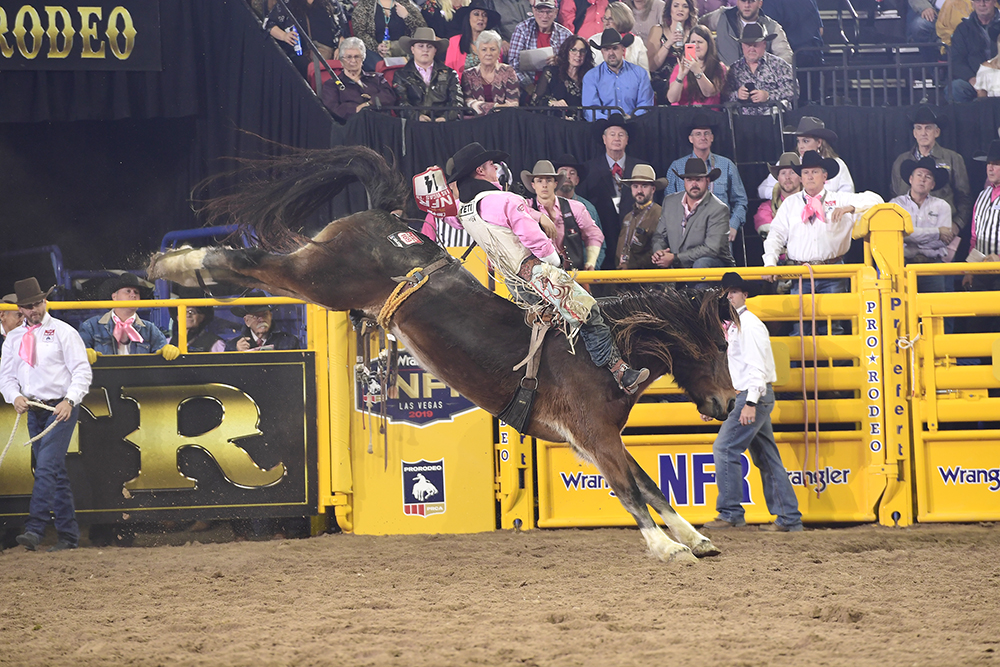 Champion revisited his old friend on Monday night, and the two danced across the Thomas & Mack Center dirt for 89 points to finish sixth in the fifth go-round of the National Finals Rodeo.

“I won my first rodeo on her at the rodeo in Belton, Texas, and I was 89 points on her that day,” he said. “I was 89 on here eight years later here at the NFR.

“That’s just a cool horse. She is a veteran. She loves it. She’s done it before. The horseman in me likes that part. When you get back on the bucking chutes, you go to battle. It was really fun, and I was happy with how it went.”

At most rodeos, and even in most rounds at the NFR, an 89-point ride is a winner, but that’s not happening at this NFR. On Monday night alone, there were four scores in the 90s, so Champion’s great ride fell to sixth place in the round. Still, it was worth $4,231.

“I was happy to place,” said Champion of The Woodlands, Texas, now living in Stevensville, Montana. “I had a couple of dry rounds. The ‘E (Eliminator) Pen’ didn’t go the way I wanted it, but it woke me up, too. I was in a little daze and having fun. I had one test me, and I had to go back to the basics.”

“When you get on two in the first round, you are feeling it the next day,” he said. “It seemed like whenever I got off the third round, I started feeling better the next morning. That’s the way it goes from out here. You feel consistent the last five horses you get on. Your body is changing through the beginning, then you hit that spot where, as long as nothing crazy happens, you just stay that way. That is where we are now.”

“At this point, I’m expecting nothing but 90s from everybody,” said Champion, who has earned $56,115 in Las Vegas and sits fourth in the world standings with $186,944 in earnings this season.