O’Connell scores a 4th round payout 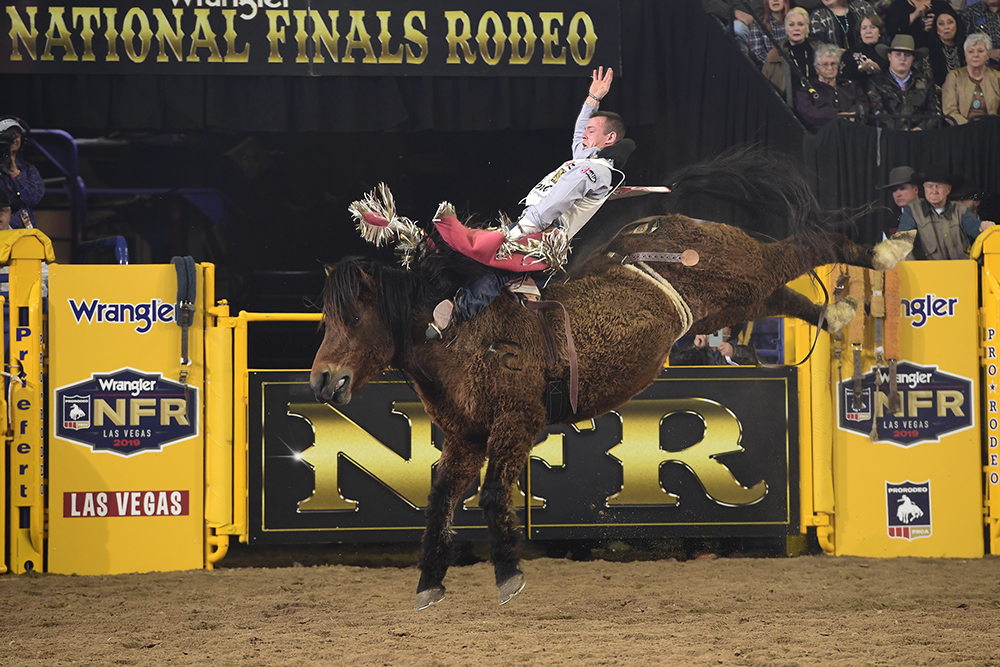 “This field is rank,” said O’Connell, who rode Pete Carr Pro Rodeo’s Scarlet’s Web for 88 points to finish fourth in Tuesday’s sixth round and pocket $11,000. “I’m trying my guts out, and an 88-point ride places fourth. That score will win any rodeo in the United States by a landslide, but not here, not against these guys.

“I’m doing my job. I’m leaving it out there every night. I’m making smart rides.”

He sits seventh in the world standings with $172,668, $59,500 of which has come in Las Vegas. His Tuesday ride featured a talented bay mare that’s been to the NFR 13 times; this is just the sixth trip for O’Connell.

“That horse looks like a grizzly bear,” he said of Scarlet’s Web. “Being from Texas, she has here winter hair. She’s been so good for so long, and she was great tonight. She was awesome, and she gave me a chance to go after the round tonight.”

Instead, a trio of cowboys – Clayton Biglow, Tilden Hooper and Caleb Bennett – beat O’Connell by a half point. Now the cowboy from Zwingle, Iowa, trails Biglow, the world standings leader, by almost $94,000. Biglow also leads the average race with a cumulative score of 523.5 points on six rides, while O’Connell is two points behind in second place.

“I care about the average, but I don’t care about it right now,” O’Connell said. “I’m worried about winning rounds right now. I’m going to start taking more chances the next few nights. I’m here to win a world title. I do understand the average will win you the world, per say, but I need to shut this gap on Clayton.

“I know what I’m capable of. We’ve got four rounds left to do it, and there is probably $170,000 up for grabs when it’s all said and done. Anybody who thinks it’s over is a fool.”

“I train for these next two rounds, the ones I feel are my strongest, the buckers and the eliminators,” he said. “When you put us on the bigger, stronger horses, that is where I shine. I’ve always said the world title is on in Round 6, 7 and 8.