Title races heating up for Cooper 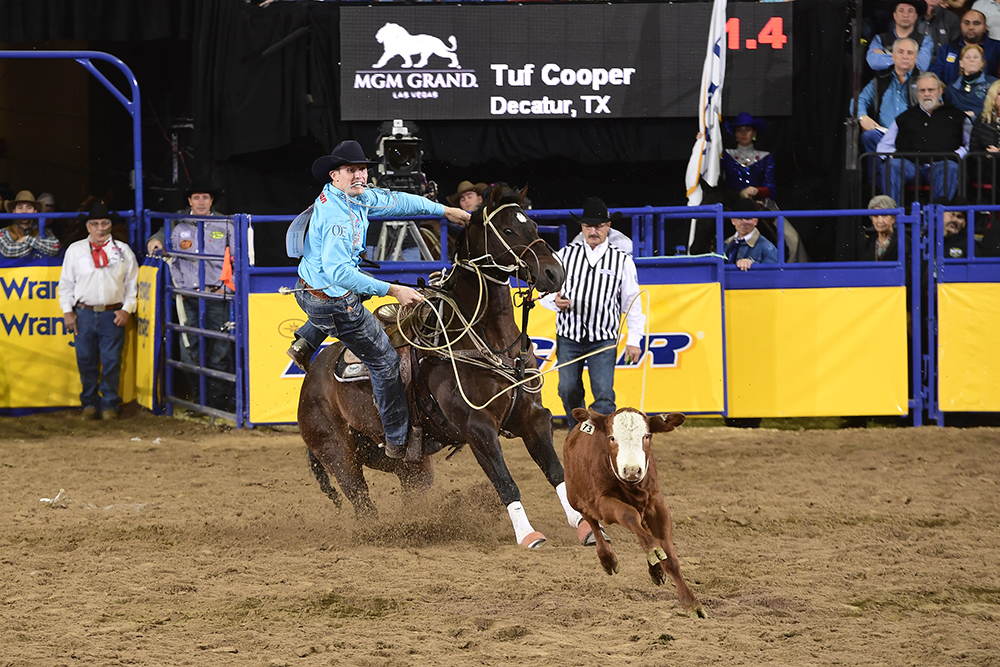 LAS VEGAS – With just three days remaining on the 2019 ProRodeo season, the races for the world championships are coming down to the wire.

For Tuf Cooper of Decatur, Texas, he is in the middle of a sprint to the finish for both the tie-down roping and all-around titles. On Wednesday night during the seventh round of the National Finals Rodeo, Cooper roped and tied his calf in 8.2 seconds to finish third. That was worth $15,654.

That pushed his NFR earnings to $62,885 and upped his season pay to $168,477. He still trails the tie-down roping leader, Shane Hanchey, by $41,451, but he has a few advantages. Cooper is in a good spot in the average race, and Hanchey sits ninth, out of the chance for money right now.

“It’s just a blessing to be in these races,” said Cooper, who owns three tie-down roping titles and the 2017 Montana Silversmiths all-around gold buckle. “This is why you compete in rodeo. This is why you want to be in Las Vegas, to give yourself a chance to win the title(s).”

The main differences between the three come in the aggregate standings. Cooper is the No. 2 tie-down roper behind NFR rookie Haven Meged, the latter of whom has roped and tied seven calves in a cumulative time of 60.2 seconds. Cooper is just a second behind and could easily make up that ground over the next three rounds.

The average payouts are $67,269 to the winner and $54,577 to the No. 2 man when the NFR concludes. It’s an incredible bonus that goes to the contestants with the best aggregate times and scores over the 10-day championship.

Smith sits fourth in the heading aggregate, which would pay $31,731, while Wright is sixth in bull riding, worth $16,500. That could make a big difference when the dust clears in Sin City on Saturday night.

Plus, there are three more opportunities to earn more cash in the go-rounds. With winners pocketing $26,231 each night, many things can change before the season concludes.

That’s what makes it fun for competitors who crave gold buckles and for the fans who flock to Las Vegas to watch it.