Aus feeling well through Round 8 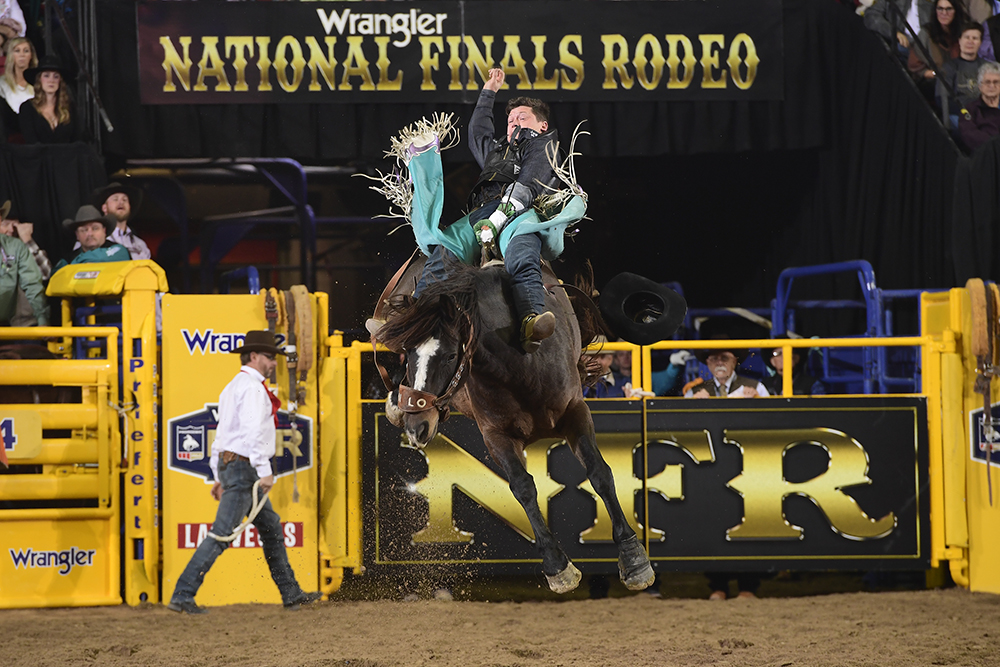 Each jump, kick and explosion can take a toll on the body, especially considering the horses that bucked in Thursday’s eight round. They’re called “The Eliminators” for a reason; they are the toughest-to-ride horses in the game.

“I feel good,” said Tanner Aus, who rode Hi Lo ProRodeo’s Pretty Woman for 86.5 points to finish fifth in the round, worth $6,769. “I’m pretty thankful. There are some guys in the locker room at this point that are fighting some stuff. If you can avoid injury, come into the finals trained and in shape, usually it can carry you through.

“I’ve been pretty lucky, and hopefully it carries me through two more nights.

He’s had a solid NFR, now his fourth in five years. He’s placed four times and earned $65,423 in Las Vegas and has moved up to ninth in the world standings with $147,018. He still has chances to add to that on Friday and Saturday nights, the final two of the 2019 ProRodeo season.

“This is the greatest rodeo in the world,” said Aus, 29, of Granite Falls, Minnesota. “Being able to place in these rounds amongst this competition is incredible. After eight nights, everyone is still feeling good riding. It has been fun.”

His ride on Pretty Woman was special. Not only did it earn him a needed NFR paycheck, it also gave him a bit of redemption. The last time he got on the horse was at the RAM National Circuit Finals Rodeo a few years ago, and he was 81.5 points. He improved his margin greatly.

“That’s a strong horse, and at about six seconds, she throws a couple of lead changes and makes it tough right when you think you are tapped off,” he said. “It feels like she swapped leads and is tough that way. I’d like to have her again. I feel like I could maybe even ride a little bit better, but I was happy it went good tonight.”

For Friday’s ninth round, he will be matched with Cervi Championship Rodeo’s William Wallace. On that horse’s previous trip Sunday, Caleb Bennett was 87 points to finish tied for third in the fourth round.

“They call it the “Hopper Pen,” but it can give you just as much anxiety,” Aus said. “(Friday) night is really a riding contest. Everything in there is going to be great. If you mess up, it’s on you. We’ve got two more rounds of really good bucking horses. It’s going to be a blast.”