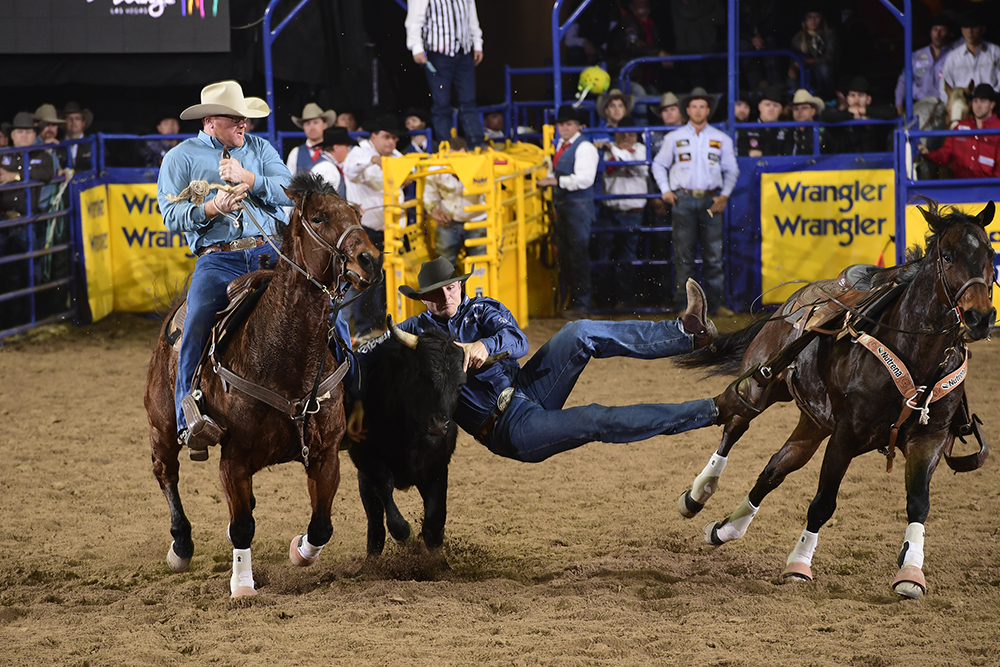 LAS VEGAS – There’s a new No. 1 in the world of steer wrestling, and he’s from Minnesota.

J.D. Struxness knocked his steer to the ground in 4.4 seconds Thursday night to finish third in the eighth round, earning his seventh payday in eight nights of the National Finals Rodeo. It was worth $15,654. More importantly, it pushed his NFR earnings to $107,308 and bumped his 2019 salary to $190,137.

“This pen of steers keeps getting stronger as the week goes on,” said Struxness, 25, of Milan, Minnesota, now living in Alva, Oklahoma. “I thought my steer was middle of the herd, but I was 4.4 and still held on for third, so I’ll take it.

“Tomorrow night, we’ll have to come back and be a little more aggressive. Hopefully we’ll have a little better steer and will move up a little bit.”

He now owns a lead of nearly $5,000 over Ty Erickson, but he’ll need to really build on that over the next two nights if he wants to walk away as the No. 1 man. He won’t have a chance to earn any money in the average race after missing his fifth-round steer. That will likely make the difference for whomever is crowned world champion.

The average winners – those with the best cumulative score through 10 rounds – will earn $64,269, while the eighth best aggregate score will collect $6,346. In order for Struxness to walk away with the Montana Silversmiths gold buckle, he is going to have to place high in both the final two rounds and have some other things go his way.

“Hopefully I can get decent steers the next two nights, hit the barrier and make aggressive runs,” he said. “Hopefully we can move up toward the top of the rounds, but the big thing is to catch some checks every night and make a little money.”

He’s done that in spades, but he’s been riding a great horse owned by Stockton Graves, who is also hazing for him. Graves is the rodeo coach at Northwestern Oklahoma State University in Alva, and Struxness was the college’s first national champion in 2016.

“The hazers take good care of you out here,” he said. “You need one that is on top of his game for you to be god. Being able to win like this, your hazer is definitely doing his job.”

Over the years, the two have transitioned from a coach-athlete relationship to one more like friend-mentor. It’s been beneficial for both.

“As soon as we started traveling together, he was older and giving advice, so I was still learning,” Struxness said. “It’s just a different relationship. Now I’ve started to get experience under my belt, so we share back and forth. He still has more experience than me, but putting it together is just better for both of us.”