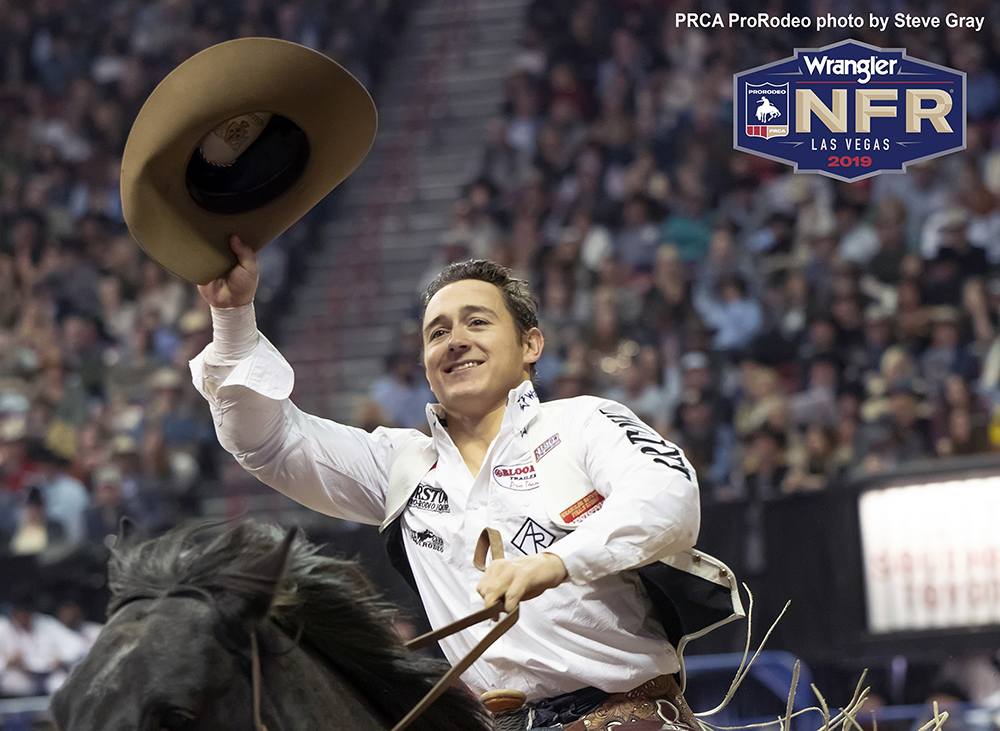 He put an exclamation mark on it Saturday night, tying his own arena record with a 93-point ride on Northcott Macza’s Stevie Knicks to win the 10th round, set an NFR average record by riding 10 horses in a cumulative score of 886.5 points and pocketing an event-best $243,891 to win the RAM Top Gun award and a new pickup.

“It’s been a long 10 days, but it’s been a great 10 days,” said Biglow, 23, of Clements, California. “I had great nights, but Orin (Larsen) and all those guys had great nights. It came down to the 10th round. If I would have fallen off that, Orin would have had the gold buckle wrapped up.

Over 10 nights in Vegas, he proved why he is a world champion. He won four go-rounds outright – that alone was worth $105,000. He also was part of a three-way tie for the sixth round, and he place on two other nights. That’s plain domination.

“I love Clayton to death,” said Larsen, who finished as the reserve world champion. “He’s a great guy and a great champion. He has a lot of titles under him, but there is not one person who is prouder of him than I am.”

Well, maybe his family was prouder, but the men that shared his locker room and tried to beat him this week celebrated Biglow’s victory.

“It was a magical way to end that, but that’s what I wanted to do,” he said. “I wanted to win the round, whether it was 93 or 89. I wanted first place, especially with the Top Gun award. Coming in, you get so caught up winning a gold buckle. At least, I did. I told myself, ‘Go win that Top Gun; you win that, you are going to win a world title. That is guaranteed.’

“Tonight, I thought, ‘Forget about that world title, make the best spur ride and give it everything you’ve got. Do what you’ve been doing all year long and go win the round. Put this Top Gun in concrete.’ I’m glad I did.”

By doing so, he pushed his season earnings to $425,843 and he finished behind six-time world champion bull rider Sage Kimzey, who pocketed $55,000 more through the campaign.

“The money is awesome, and this place pays so good; it helps a guy make a living, but I came for this right here,” Biglow said, pointing to his Montana Silversmiths gold buckle. “I didn’t come here for any other reason. Obviously, money is great, and the Top Gun is awesome, and I love it, but any guy in this rodeo is here for one reason only, and it is to win that gold buckle.

“I’ve been dreaming about this moment since I was 10 years old.”

He can wake up now; the dream has come a reality.