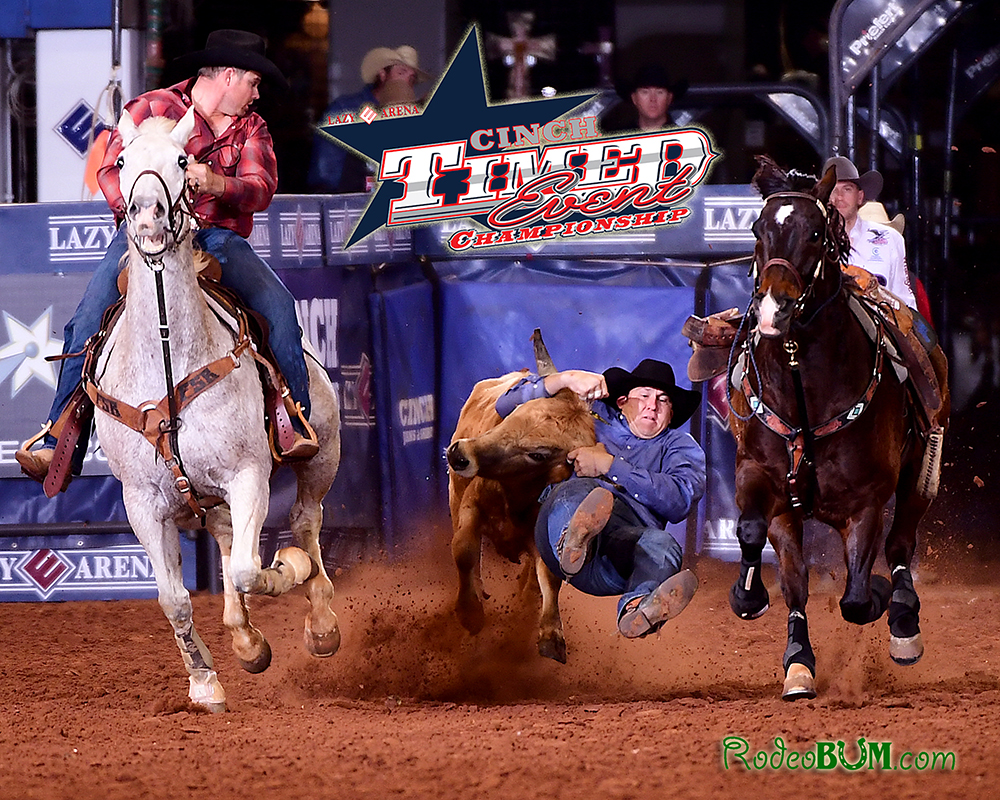 Ask Haven Meged, who was just 21 years old when he won his first Montana Silversmiths gold buckle in tie-down roping this past December. Or ask Clay Smith, who was 28 when he won his second straight heading world title three months ago.

Or ask Justin Thigpen, who, at age 37, won the CINCH Timed Event Championship in his first year of competing at the “Ironman of ProRodeo” last March. He will have his chance to defend that title over a three-day, five-round championship fight March 13-15 at the Lazy E Arena.

“I enjoyed the event last year,” said Thigpen of Waycross, Georgia. “You have to work five events every day, and it’s a test. It’s a marathon, not a sprint. I love the idea of getting to work all your events.”

Outside of single steer roping, he’s a regular competitor in the other events, and it showed last year when battled through the most unique challenge in rodeo – each man must compete in each of the five timed events (heading, heeling, tie-down roping, steer wrestling and steer roping) per round for five rounds, stretched out over just three days.

The weekend also is a celebration. The CINCH Fan Zone will have autograph sessions after the 7:30 p.m. performances on Friday, March 13, and Saturday, March 14. It will also feature a bar, games, giveaways, a lounge area to watch each performance live, a photo booth and the CINCH Kids Dummy Roping.

The competition, though, is a grueling examination of each man’s physical attributes and mental fortitude. Because of that, it’s one of the toughest events to win in Western sports.

“I think having the success I’ve had helps,” said Thigpen, a 17-time International Professional Rodeo Association world champion. “The steer roping is the newest thing, but I’m a student of the game.”

His studies paid off, and he owns the hardware to prove it, just like Meged and Smith, two others in this field of 20 amazing cowboys that won gold in 2019. All are set for the battle to commence in mid-March. Though Meged is a first-timer in this group, he knows quite a bit about it. He was in the inaugural Jr. Ironman field and is that event’s first graduate into the CTEC.

“I’m excited to compete with K.C. Jones,” said Meged of Miles City, Montana. “I used to rope with him a lot, and he perfected my tie. To compete against those guys in that field is really awesome.

“Coming off the momentum of the world title is awesome. You get on a roll, and it’s no different than anything else. You’ve got to keep it simple. It comes down to us taking care of the things we can control.”

That mindset worked for Thigpen, just as it did for Smith in his first year competing in 2014. Smith was in position to win the title on the final day that year but settled for second place. It was still one heck of a showing for a cowboy that was called to be an injury replacement just days before the first round began.

In fact, it may have been the catalyst he needed in his career. Since then, he has qualified for the National Finals Rodeo each of the past five years.

For his part, Thigpen didn’t rest on his laurels or the $107,000 he earned last March. He utilized the money while building a house, then went back to work. In addition to his competition schedule, he also operates a livestock production company, putting on rodeos primarily in the Southeast.

“Not much has really changed since last year,” he said. “I go to rodeos throughout the whole country. We pretty much stayed with the same routine: We just continue to do what we love.”

That passion speaks to what drives each of the competitors in this year’s field. It’s a love of the game while chasing the dreams of winning the CINCH Timed Event Championship.