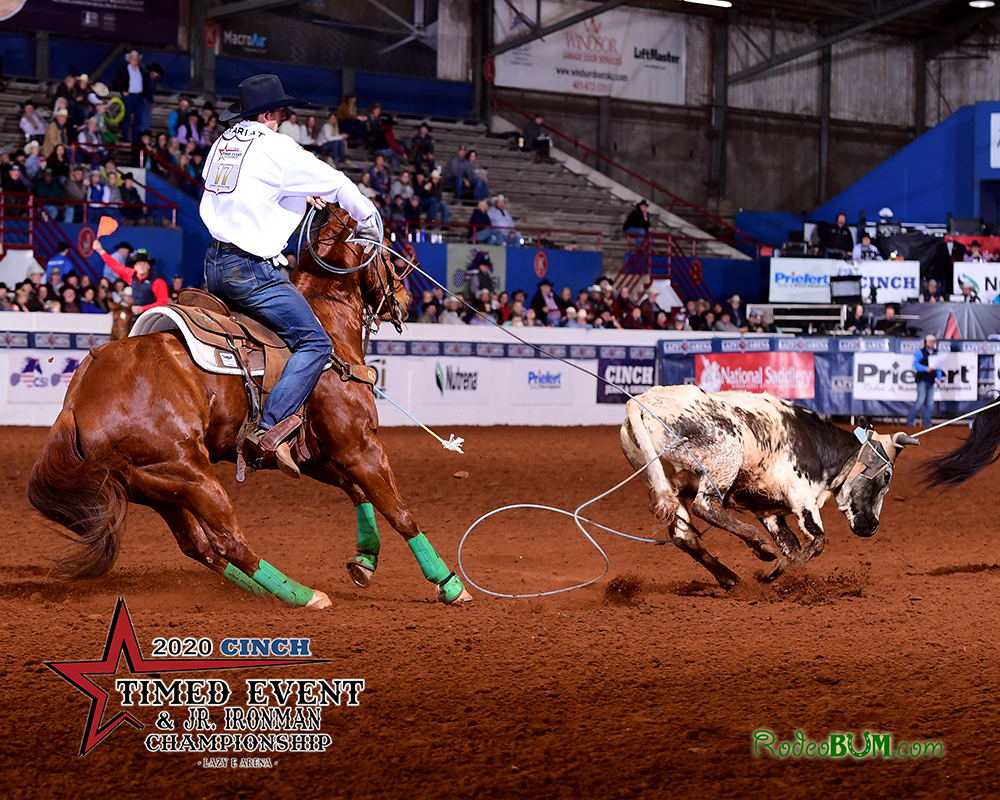 When he wasn’t practicing or competing, he was watching it on TV. The family’s pile of video cassettes included years of the CINCH Timed Event Championship, and those images helped fill the young cowboy’s thoughts of being one of the greatest ever.

Fast forward to Sunday, when his dreams were realized. He roped, tied and wrestled 25 animals in a cumulative time of 340.4 seconds over just three days to win $103,000 and become just the 16th person in the 36-year history of the CTEC to claim the elusive title.

Yes, it was. Of course, when one pockets that kind of cash, it’s bound to be more exciting. But there was more to it. The weekend’s festivities featured one of the tightest championships in recent history. Only 30.2 seconds separated first through fifth place, and Santos edged the runner-up – 2017 champion Jess Tierney – by just 7.3 seconds.

“Things can go great or they can go the other way, but this weekend went really good,” said Tierney, the rodeo coach at Western Oklahoma State College, who pocketed $29,000. “I’d say that money will fit just right.

This was just an extension of recent first for Santos. In 2019, he qualified for the National Finals Rodeo for the first time in his young career. He finished 10th in the tie-down roping world standings and earned $81,076 in Las Vegas this past December. All the while, he also gained a boatload of confidence, and that carried over into this weekend.

Still, he had to overcome some early jitters.

“After getting that first steer under my belt, I felt a lot better about things,” Santos said, referring to Friday afternoon’s first run of the opening round. “You don’t have time to overthink things too much. It’s definitely a battle and definitely a marathon.”

This endurance-test included his older brother, Lane Karney, who just completed his fourth CTEC. In his first trip to the Lazy E Arena in 2017, Karney enlisted in Santos’ help. That, too, paid off for the younger sibling, albeit three years later.

“Lane and I are two years, two weeks apart in age,” Santos said. “Every day of our lives, we were basically matching each other.

“I’ve been on the waiting list the last couple of years. I’m glad I’ve seen it on TV and on the tapes so many times, but that first year I came with Lane, I realized that it’s completely different than what it looked like on the big screen. I got a whole new vision and idea of what the event was. I learned a lot that year.”

And it paid off in his first time competing at the “Ironman of ProRodeo.” It’s not often that newcomers walk away with the biggest check at this unique event, but this marks the second straight year that a CTEC rookie earned the crown – a year ago, Georgia cowboy Justin Thigpen won the title, then he missed this year after suffering an injury just two weeks ago.

“Taylor is a great kid with an amazing talent,” Tierney said. “Everybody here was such a great talent, and that made for fun watching.”