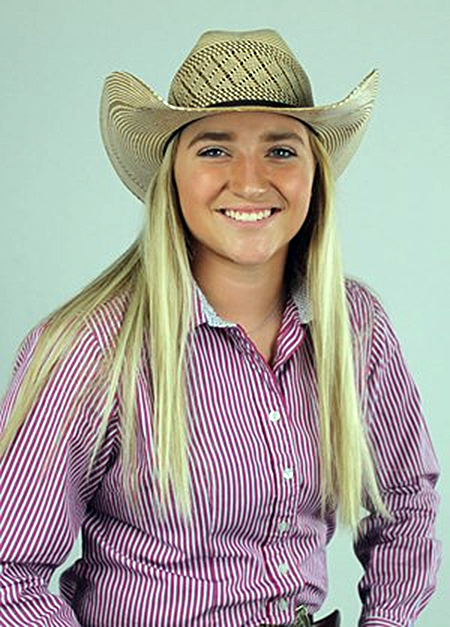 ALVA, Okla. – Hannah Zimmers was excited to have qualified for championship round at a Central Plains Region rodeo for just the second time in her three-year college rodeo career.

But because of the COVID-19 pandemic, the short round at the Fort Scott (Kansas) Community College rodeo was canceled this past weekend. Still, Zimmers’ breakaway-roping run of 2.7 seconds helped the Eureka, Kansas, cowgirl to the No. 2 spot overall. That was worth 126 points, which shot her up to ninth in the regional standings.

“It makes me feel really good to know that hard work pays off.”

It’s been a work in progress for four years. She began competing in breakaway roping in her third year of high school, then opted to further her education at the college in Miami, Oklahoma, with a solid horse she had acquired.

“I wasn’t near the caliber that my horse was, but I knew (coach) Stockton Graves had a good breakaway system at Alva, so that’s why I transferred,” Zimmers said. “That summer after my freshman year, my good horse had liver failure, so we had to put him down, and I’ve been in and out and borrowing horses.

“My sophomore year of college rodeos, I didn’t catch anything. My confidence was super low. I questioned myself.”

A year ago, she acquired another top horse from the northwest Missouri community of Savannah, home of tie-down roping world champion Tyson Durfey. Jet is a 16-year-old bay gelding, and after several months of working out the kinks, the tandem has found a winning edge.

“The day I tried him out was just the second time he’d been out of the pasture in a few months,” she said of Jet. “We ran 24 calves, and he took it like a champ. I knew he was going to get me to the winner’s circle. It’s been a year that I’ve had him, and it’s finally come full circle.”

Zimmers wasn’t the only Ranger to accrue points in Fort Scott. Barrel racers Makayla Mack of Christmas, Florida, and Samantha Chambers of Calhan, Colorado, finished among the top eight for the women.

On the men’s side, the biggest gainers came in steer wrestling, where Bridger Anderson of Carrington, North Dakota, won the rodeo with a 4.3-second run. Beau Kelley of Artesia, New Mexico, was 4.5 to finish second, while Brayden Sorenson of Heber City, Utah; Zane Thompson of Cheyenne, Wyoming and Brent Woodward of Dupree, South Dakota, also finished among the top of the heap.

Thompson also garnered points in tie-down roping, stopping the clock in 11.5 seconds to finish eighth. Saddle bronc rider Denton Mars of Freedom, Oklahoma, scored 68 points to finish in a tie for eighth place, while header Jaden Trimble of Coffeyville, Kansas, was 5.7 seconds with his partner, Marley Berger of Coffeyville Community College to finish in a three-way tie for second; heeler  Bo Yaussi of Udall, Kansas, roping with Brent Mibb of NEO, finished in a tie for seventh.

While the coronavirus has wreaked havoc on the everyday goings-on, it also leaves the remainder of the 2019-20 Central Plains Region season in limbo. With that, Anderson remains the top dog in the circuit’s bulldogging standings; the reigning national champion has scored 635 points through six events and holds a lead of 285 points over the field. Colt Madison of Whiting, Iowa, sits third in the standings, while there are several other Rangers in contention to qualify for the College National Finals Rodeo in their respective events.

The key to Northwestern’s success over the years has been a solid work ethic and the ability to help focus on a winning mentality.

“Stockton has really been helpful in the mind game, especially in my case,” Zimmers said. “I’m the definition of a head case. He’s always so calm, cool and collected. He’s been around, and it shows.

“He’s broken it town for me, but so have (breakaway ropers) Taylor Munsell (also a graduate assistant coach), Melissa Couture and Brandi Hollenbeck. They’re so good with what they do. During my freshman year, I was intimidated by them because they were good, but they’re really great and really helpful. I’m helping other people now, and I’m using the tips that Stockton, Taylor, Melissa and Brandi have given me.”

That’s exactly what the college experience is all about.